Highlights from the annual maintenance of the CMS detector 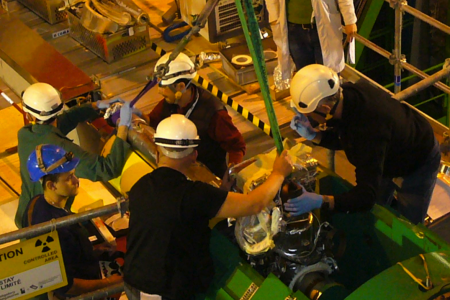 The Year-End Technical Stop or YETS, when the LHC takes its annual break, seemed like a quiet time to those outside CERN. After all, there were no collisions taking place and the CMS detector was not operating 24-hours-a-day, seven-days-a-week. However, each YETS is a very busy period for those maintaining the detector as well as the underground experimental and service caverns.

This year’s technical stop suffered an additional complication involving a fault in the LHC beam pipe vacuum system, at a distance of 18.5 m from the CMS interaction point. “During the increased-intensity running towards the end of last year, we saw unexpected spikes of high pressure, near this 18.5m point. This led to large beam-gas background and on occasions inability to take data because of too high dead-time or unsuitable conditions for turning on the Tracker,” says Austin Ball, CMS Technical Coordinator.

After an X-ray of the section was taken, the team realised that there was a serious problem: the RF continuity fingers inside a bellows unit had to be replaced. A key complexity was that there is no sector valve between the affected point and the collision point inside CMS. Without the sector valve, replacing elements inside the beam pipe would open up the rest of the pipe to the atmosphere, contaminating the coating inside the beam pipe that is crucial to achieving a low vacuum.

The CMS team discussed the problem at length over the Christmas break with colleagues from the vacuum and surface coatings group in CERN’s technology department. They proposed a solution which had been tried recently in several other places but never actually in the same vacuum volume as an interaction point.

“The vacuum people had developed this technique of using a protective flow of neon from each direction. This apparently prevented the contamination of the inner beam pipe. After quite a lot of discussions with them we decided that, although there were risks, the risks were sufficiently low to give this a try,” says Ball.

CMS spokesperson Joe Incandela adds, “It was like having heart surgery performed on a close relative.”

“The vacuum team planned it very well, they rehearsed it very well, and they executed it very well,” continues Ball. “In an hour and a half they had replaced the piece. The vacuum went down to a few 10−5 millibars immediately, which is a good sign, and then eventually stabilised at a few 10−9, as it was before. This operation should give us fewer problems with beam-gas-induced background and residual gas pollution.” Indeed, the first evidence from 2012 operations is that the incidence of large events in the pixel tracker due to beam-gas interactions is reduced by a factor of 10 compared with 2011.

At the end of Long Shutdown 1 (2012-2013), CMS requires the Tracker to operate at a temperature 10° Celsius lower than at present, to reduce the impact of radiation damage resulting from the Tracker’s proximity to the interaction point. “A fair amount of work went into establishing that the fluoro-carbon cooling system has the capacity to run the Tracker much colder than it is at the moment,” explains Ball.

In the cooling pump room, some very big pumps were out of reach of the hoists, making CMS vulnerable to long down-time in the event of a critical failure. If the pumps failed, it would have been impossible to get them out of the room. Ball elaborates: “In fact, we would have had to dismantle them on the spot, then bring in a new pump and rebuild it on the spot. You could not take it out as a unit.” To mitigate this, crews worked over Christmas to install an overhead beam crane, making it possible to remove each pump as a unit in the event of a failure.

Consolidation of the magnet systems

At the heart of CMS’s conceptual design is the solenoid, operating at 3.8 Tesla and responsible for bending extremely fast moving charged particles so that their momenta can be measured accurately. This superconducting conductor in the solenoid coil is surrounded by pure aluminium that gets work-hardened every time the magnet is turned on and off. Over time, this causes its resistance to increase to a point where the magnet can no longer be operated at 3.8 T, because the current flowing through the coils cannot be absorbed at a reasonable temperature. There is an unavoidable minimum number of times that this on-off cycle must be carried out.

However, in 2011, the heat exchangers at the magnet cryogenic plant needed to be regenerated several times due to pollution from water vapours; this increases the number of regeneration (off-on) cycles for the magnet. To counter these effects, CMS installed helium dryers in the cryogenic plant to eliminate the water vapours, hopefully leaving CMS with only two mandatory magnet-regeneration cycles in 2012.

In addition, some re-wiring was done to ensure that the magnet restart is less prone to electrical glitches.

Preparations for the Long Shutdown

With the LHC resuming proton collisions last week, the CMS detector has been operating smoothly thanks to all of the maintenance work carried out during the YETS. Moreover, preparations were also made for the many activities scheduled for Long Shutdown 1.

“For the biggest achievements of this shutdown, we have relied heavily on the help of our colleagues in the technical departments of CERN, and we are very grateful to them for a very productive and cortial collaborative effort,” concludes Ball.