How many Higgs bosons are there? 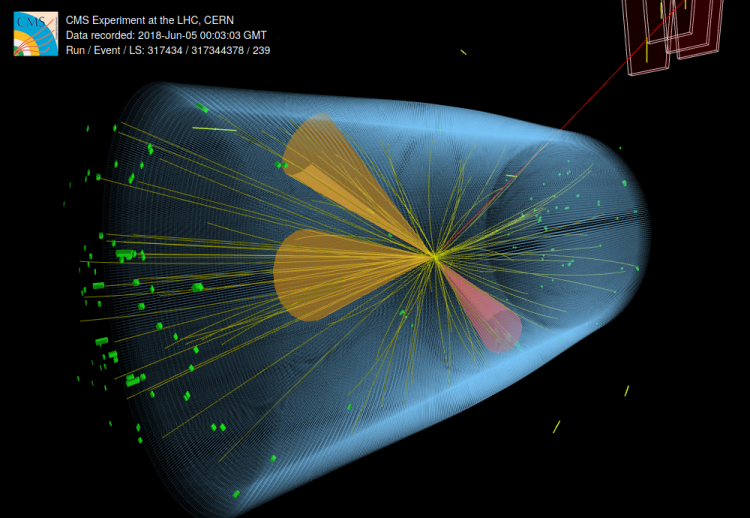 A display of an event with two b-quark jets (orange cones to the top) and two tau lepton decays, one decaying into a muon (red line) and the other decaying into pions (pink cone).

In the Standard Model of particle physics, at least one Higgs boson is needed to explain fundamental particles’ masses. There is, however, no reason why there needs to be exactly one. On the contrary, many theories of physics beyond the Standard Model require an extended Higgs sector from which many additional Higgs bosons arise. For example, many popular methods to solve open questions such as “What is dark matter?” or “How does gravity fit into the Standard Model?” predict at least five Higgs bosons.

Since the inauguration of the LHC, many searches for these additional Higgs bosons have been conducted. Usually, the direct decay of a new boson into quarks or leptons is investigated. So, why could these Higgs bosons so far not be found? The answer might be that the new boson behaves differently from the Higgs boson we already discovered. It might interact differently with quarks, or leptons, or both. Maybe it cannot be easily produced during the proton-proton collisions at the LHC. To summarize, its production could be suppressed.

These extra Higgs bosons might then actually be of similar mass as the discovered Higgs boson but still be undiscovered just because they are produced much more infrequently at the LHC. The key to finding them could lie in the coupling of these bosons to each other, which is the only coupling expected to be of full strength.

A new search conducted by the CMS collaboration looks for a signature in which the known Higgs boson is produced together with a new Higgs boson with suppressed couplings to quarks and leptons. The two bosons would be created by a third undiscovered Higgs boson which is very heavy - with a mass in a range between three times and twenty times heavier than the Higgs boson we know. 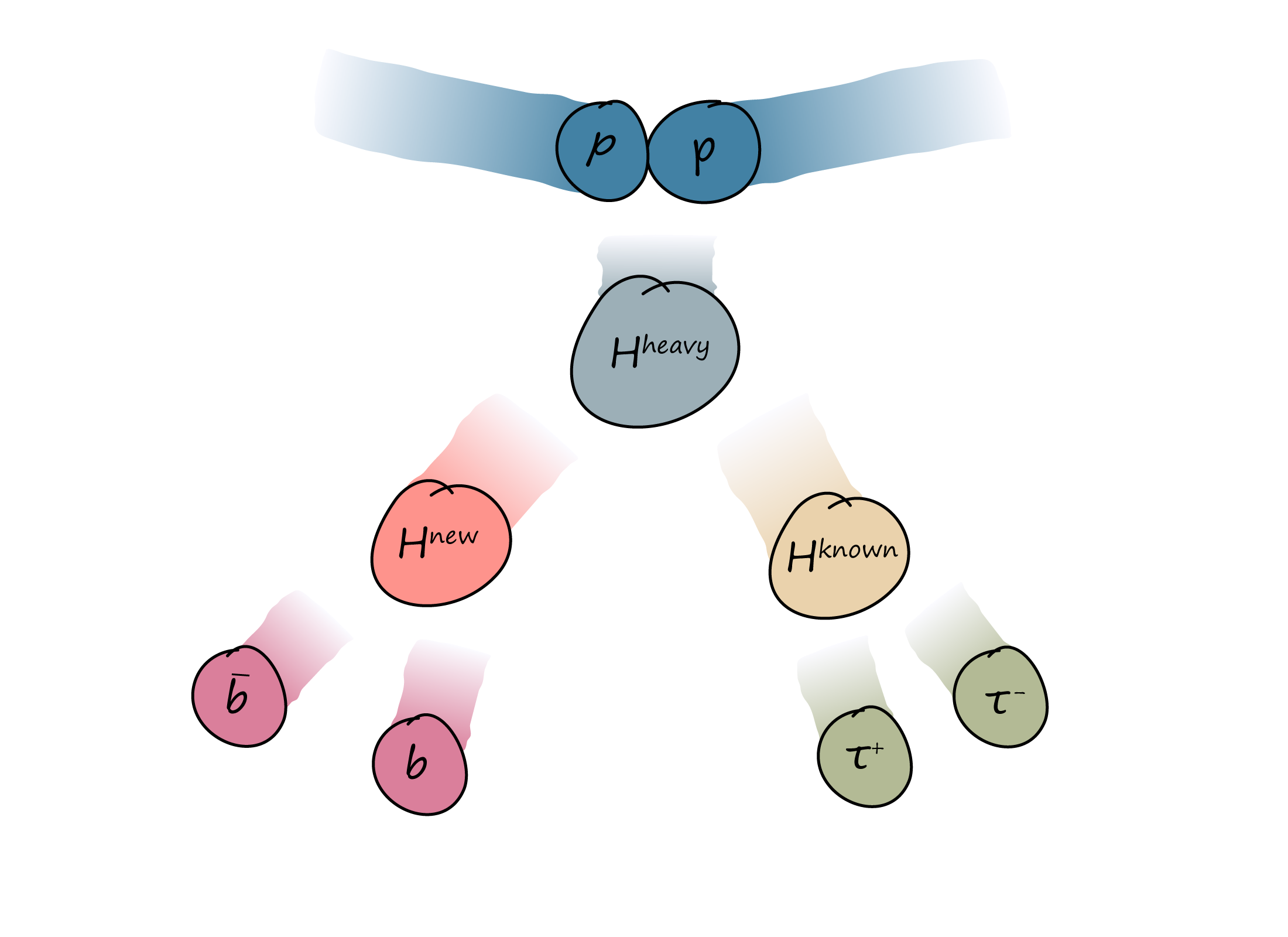 Figure 1: A simplification of the collision of two protons resulting in a heavy new Higgs boson. This heavy boson decays into the known Higgs boson and a different new Higgs boson that has reduced couplings to other particles and can only be produced via this process. However, once created, the new Higgs boson behaves similarly to the discovered Higgs boson and can decay into b-quarks or tau leptons.

The CMS collaboration has investigated if these two new Higgs bosons are created at the LHC. As Higgs bosons decay very frequently into b-quarks, this decay is one of the best ways to collect many Higgs bosons. The only caveat is that b-quarks are hard to find. They create particle jets with many constituents, similar to the protons’ remnants during the collisions. On the other hand, the Higgs boson decay into tau leptons happens more rarely and results in a very clean event signature. Tau leptons decay into isolated electrons, muons or a small number of pions which can all be easily detected by the CMS detector. Combining the two is, therefore, a great way to search for events with two Higgs bosons.

A challenge of the analysis is that two unknown bosons are involved, and the signature that is searched for depends on the masses of both. Over 200 million events were simulated for the analysis to estimate how the events would look in the CMS detector. This was done for all possible combinations of the still unknown mass of heavy and light extra Higgs boson.

The events collected by the CMS detector are then classified using machine learning into signal and background. One major source of background is the production of a pair of top quarks, which commonly occurs at the LHC. Top quarks decay almost exclusively into b-quarks together with leptons or hadrons. Top quarks can be almost indistinguishable from the decay of two Higgs bosons if no innovative machine learning classification is performed. To estimate top quarks and other background sources, modern data-driven estimation methods such as swapping muons for tau leptons are utilized to predict up to 95% of the background without requiring full event simulation. This way, a good understanding of what to expect is ensured. 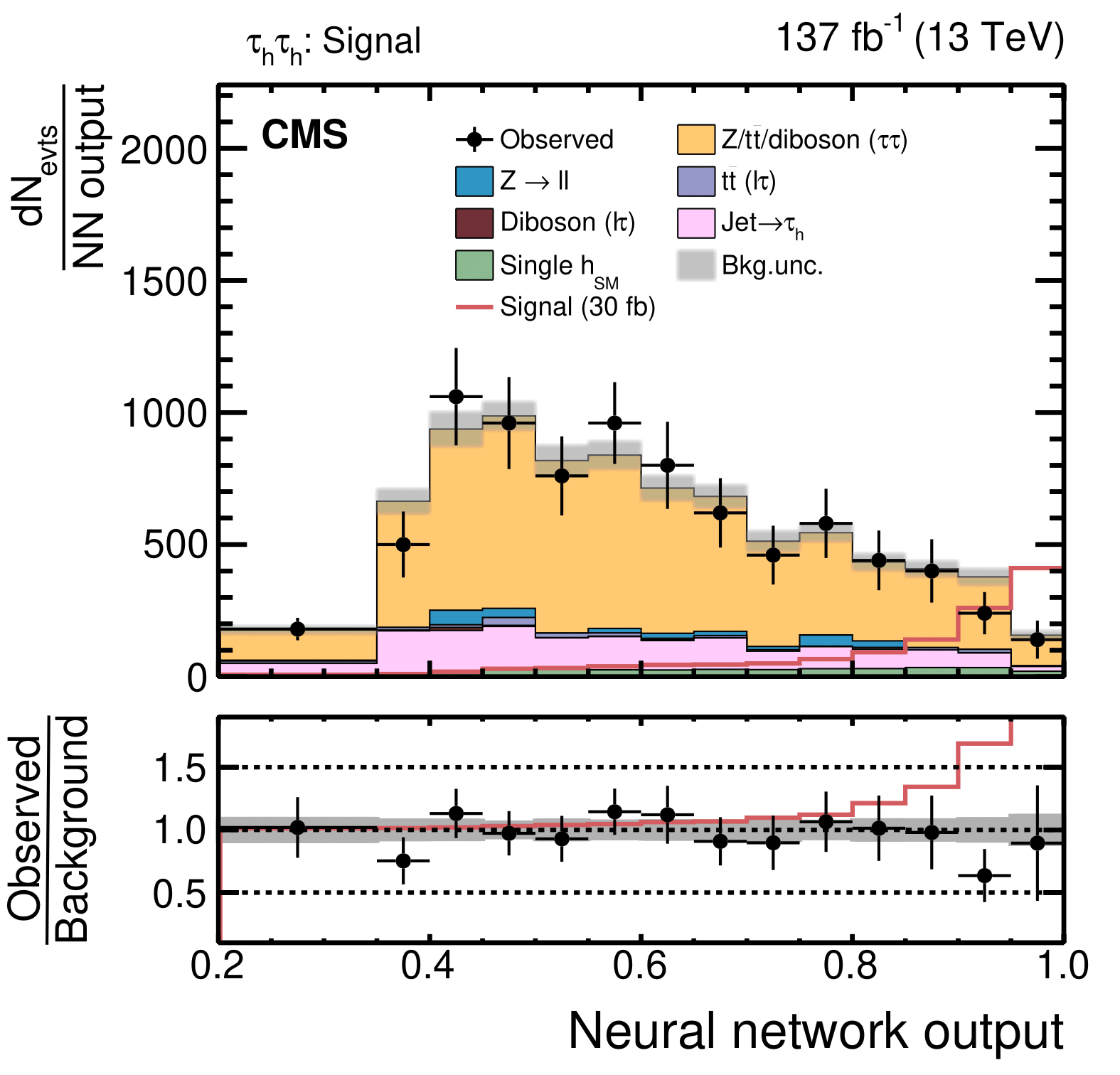 Figure 2: Output of the neural network classifier to find events with two unknown Higgs bosons. The red line indicates the expected extra events if such a signature were to occur in the CMS detector. The background events indicated by the filled histograms decrease towards a higher score, whereas the signal expectation increases. A signal would appear strongly in the last bins of the distribution. The black points with error bars show the observed data by CMS. It is apparent that no significant excess is visible that can be attributed to the signal.

This search was conducted for the first time and opened a new way of probing theories in which additional Higgs bosons might behave very differently from the one we have discovered so far. So far, no significant excess has been observed. In the scenario considered for this search, the existence of new extra Higgs bosons with masses of less than 600 GeV (five times the mass of the discovered Higgs boson) becomes increasingly unlikely.

Events that are of interest for this analysis contain both a pair of tau leptons and b-quarks, and are very rare at the LHC. Thus, the search is still limited by the amount of data available and will significantly benefit from the data that is yet to come during the next few years. The search will continue during Run 3 of the LHC starting in 2022. After that, the High-Luminosity LHC will start, and the CMS detector will record about ten times more collisions than in Runs 2 and 3. All this data will help either find such new Higgs bosons with suppressed couplings or disprove their existence.