Hunting leptoquarks with the CMS experiment 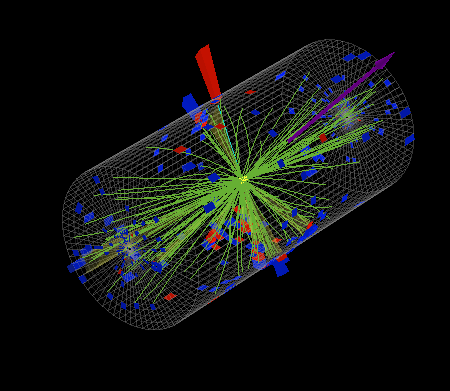 The CMS Collaboration has released a new search for leptoquarks, a hypothetical particle that would be the "missing link" between quarks and leptons. The result has been submitted to the journal Physics Letters B.

Figure 1: Picture illustrating the organization of fundamental particles in the standard model of Elementary Particles, highlighted in the blue box on the left, and hypothetical enlargement of the number of particles with a beyond standard model particle, called “leptoquark”, highlighted on the right (modified from src).

In the blue box in Figure 1, we can see that matter particles are distinguished as “leptons”, such as the electron, or as “quarks”, such as u and d quarks that compose the proton. Leptons and quarks are represented separately because they appear to have rather different properties in all observations so far. However, it is not clear whether such a highly symmetric scheme would hide new physics that might manifest at the energy regime investigated at the Large Hadron Collider at CERN and can be detected by the CMS experiment. Why are matter particles, quarks and leptons, separated? Can they be unified? Can there be a beyond standard model particle, which we can call “leptoquark”, that couples (and decays) to both a quark and a lepton and can turn one into the other? Such possibilities emerge quite naturally in several theories that extend the standard model, and their investigation motivates our search.

In this search, we challenge the standard model by testing its prediction of the expected events on an unprecedented final state of elementary particles that contains the heaviest quarks and leptons (namely t quark, b quark, tau lepton and neutrino, listed in Figure 1). The reason for considering the heaviest particles is to challenge another aspect of the standard model. As we can see in the blue box in Figure 1, the fermions are organized in generations of particles that appear as heavier copies of the electron lepton or the up and down quarks. The elementary particles analogous to the electron have always behaved similarly, apart from their differing masses and associated effects, in all studied reactions. This is known as “lepton-universality” and is a principle taken for granted without any strong motivation, which has recently been put under stress by a series of anomalies observed in precision measurements (related to the B meson decays). A possible explanation of these anomalies, which are still under investigation and not yet confirmed, relies on the existence of the leptoquarks favoring their coupling to the heaviest fermions.

In our search, we rely on an observable that accounts for the energy present in each event, which we can for simplicity denote as “ST”. An example of the distribution of events of ST is shown in Figure 2. In this figure, the colored blocks represent the predictions of the background (from the standard model), while the black points are the observations. The colored lines indicate the entries for a hypothetical leptoquark (LQ) with different properties. 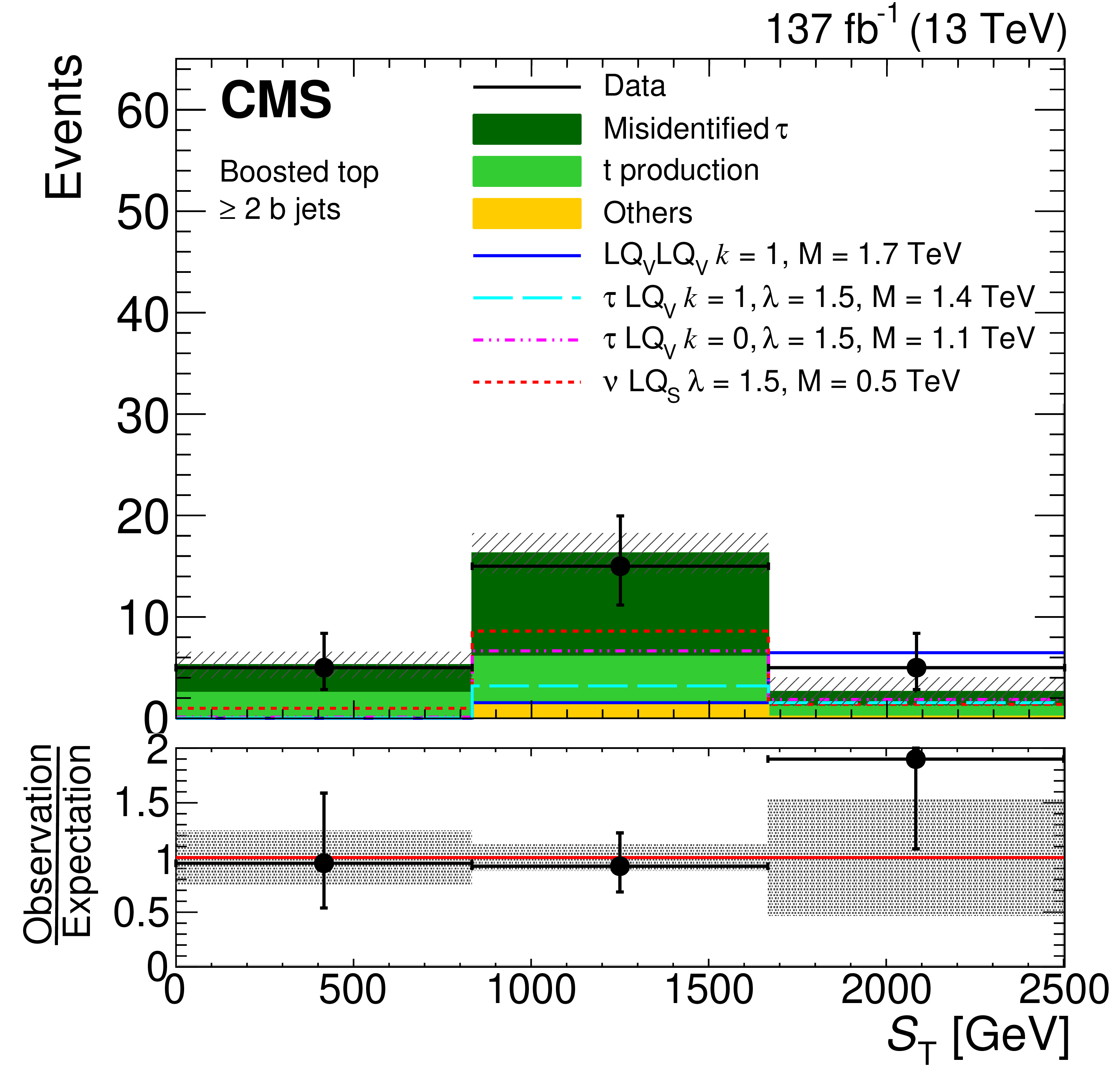 Figure 2: Distribution of the events of the observable ST, which represents the energy present in each event in the final state of elementary particles investigated in the search. The stacked plot contains the predictions of the standard model background, while the black points are the observations. The colored lines indicate the entries for a hypothetical leptoquark (LQ) signal, with different properties.

As we can see, the prediction of the standard model is in agreement with the observed data. This indicates that it is not likely that such a leptoquark would exist, at least not for the energy of this collider and for the specific kind of leptoquark in the studied final state. In order to properly quantify this result, we use a well-established statistical technique to derive exclusion limits with a certain confidence level (say 95%) for the existence of a leptoquark in the plane of its coupling to a quark and a lepton, λ, and the mass of the leptoquark. Figure 3 shows this exclusion for given hypotheses of the leptoquarks properties (LQV) and considers different production mechanisms for the leptoquark (red and blue lines) and their combination in the black line, whose region on the left is excluded. The plot compares both the expected (Exp., dotted lines) and observed (Obs., solid line) exclusion limits. It also highlights in the gray area the preferred region for the existence of leptoquarks, as predicted by some models attempting to explain the above-mentioned anomalies in precision measurements. As we can see, a large portion of this parameter space is constrained.

The CMS experiment has an extensive program to investigate leptoquarks under different hypotheses, and if such a particle exists, it will be revealed in future studies! Figure 2 contains only the data that was collected in 2016 through 2018, and the LHC is expected to produce at least a factor 20 data more in its lifetime. With the future runs, such as Run 3 starting in 2022 and the high-luminosity LHC in 2027, the hunt for leptoquarks continues, and still has plenty of potential for finding this exciting solution for the unification of quarks and leptons! 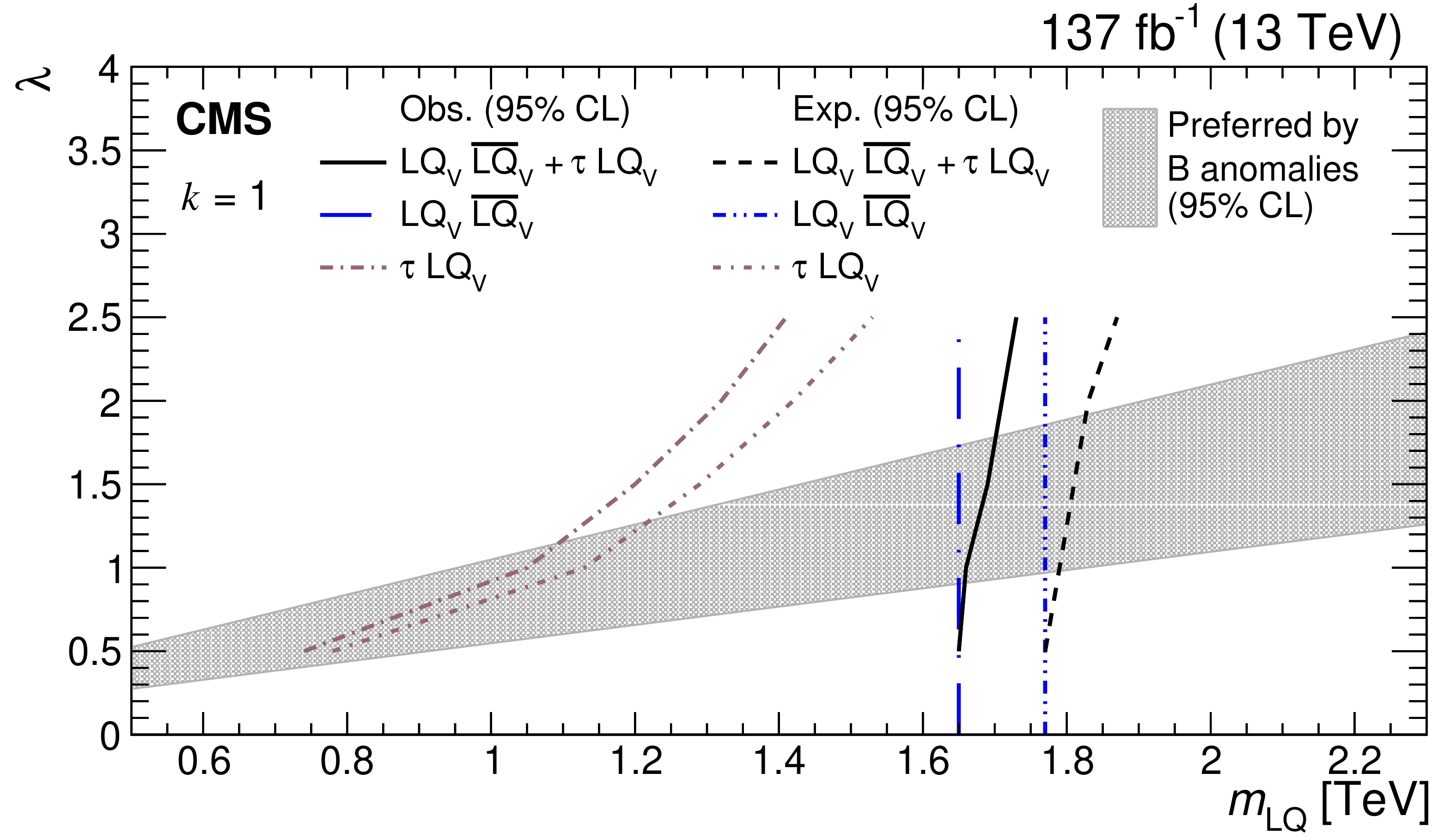 Figure 3: Exclusion on the existence of a leptoquark, at 95% of confidence level, considering different production mechanisms for the leptoquark (solid lines) and their combination, whose region on the left is excluded. The plot compares both the expected (dotted lines) and observed (solid line) limits. It also highlights in the gray area the preferred region for the existence of leptoquarks, as predicted by some models attempting to explain the anomalies in precision measurements mentioned in the text.