Jetting through a droplet of matter from the early universe 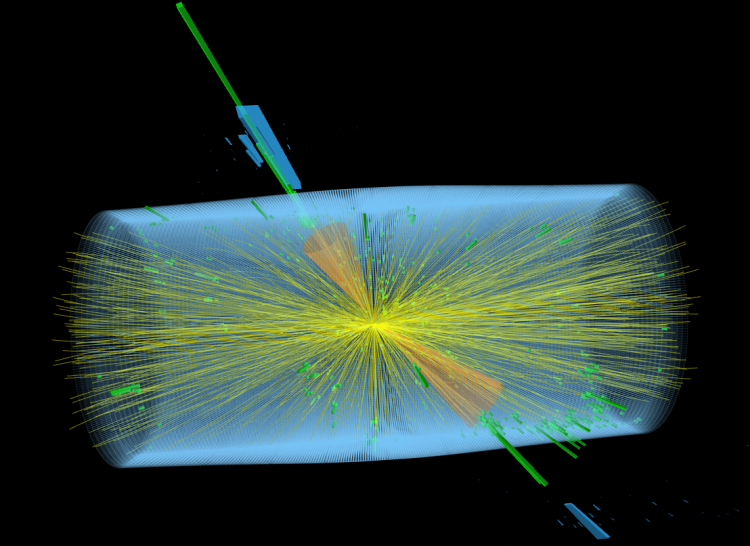 High energy heavy-ion collisions provide a unique opportunity to study one of the four forces of nature, the strong force, under extreme conditions. A new result from the CMS experiment shapes our understanding of the strong interaction and further magnifies nature's most microscopic details.

Soon after the Big Bang, for a few microseconds, the entire universe consisted of a unique form of matter called quark-gluon plasma. As the universe expanded and cooled, the plasma disappeared. However, physicists have produced it in experiments using powerful particle colliders, such as the Large Hadron Collider (LHC) at CERN. The conditions similar to those found in the early Universe are achieved by smashing together heavy nuclei (lead in the case of LHC) with enormous energy. In these collisions, tiny droplets of quark-gluon plasma are produced for a vanishingly short time, around 10-22 seconds (that is, 0.0000000000000000000001 seconds). Because of the short time scale, it is impossible to use external tools to study the created droplet, so scientists must use "internal" probes created together with the plasma. It turns out that jets, collimated streams of particles initiated early in the collision, are well suited for studying quark-gluon plasma properties.

To better understand how these jets of particles can be used to study the quark-gluon plasma, let us take a closer look at what is happening in a collision of two heavy ions. Particle collisions are events where the famous Einstein formula, E = mc2, comes to life. The energy supplied by the beams is transformed into mass, and an abundance of new particles is being created. These particles are not emitted uniformly in all directions. Instead, specific angular emission patterns emerge. One such pattern is jet formation -- several particles emitted close together in one direction, while another close bunch balances the produced momentum in the opposite direction. The system of two such energetic back-to-back clusters is called a dijet. In heavy-ion events, as jets emerge from the very early stages of the collision, they traverse the forming quark-gluon plasma medium and interact with it before escaping into the experimental measuring devices where they are detected. As a result of these interactions, the jets lose energy, and the physicists say that they get "quenched". Comparing the properties of jets quenched in the quark-gluon plasma with those measured in proton-proton collisions, where they are not affected by the medium, makes it possible to infer the properties of matter in the early universe.

The details of the jet-medium interactions remain under active investigation by experimental and theoretical communities. Dijets are a great tool to shed light on this matter: since they can be created in various plasma locations, they are sensitive to path length-dependent effects. The lead ions collided by the LHC are small but not point-like. The degree of nuclear overlap in a collision results in different interaction region geometries, which, in turn, lead to a different amount of plasma produced and, correspondingly, to very different final states after the collision. The greatest amount of quark-gluon plasma is created in so-called central collisions, where the two lead ions collide head-on.

On the other hand, in peripheral collisions, where only the edges of the ions graze each other, the amount of created plasma is smaller. Collision centrality provides the first experimental handle on the average medium path length traversed by a jet. Dijets add another unique dimension to this investigation: the momentum balance between the two sides could tell us how much each jet has interacted with the plasma. This imbalance is characterized by the xj variable, which is the ratio of the less energetic (subleading) jet transverse momentum to the more energetic (leading) jet transverse momentum. Figures 1 and 2 show one way to understand this. 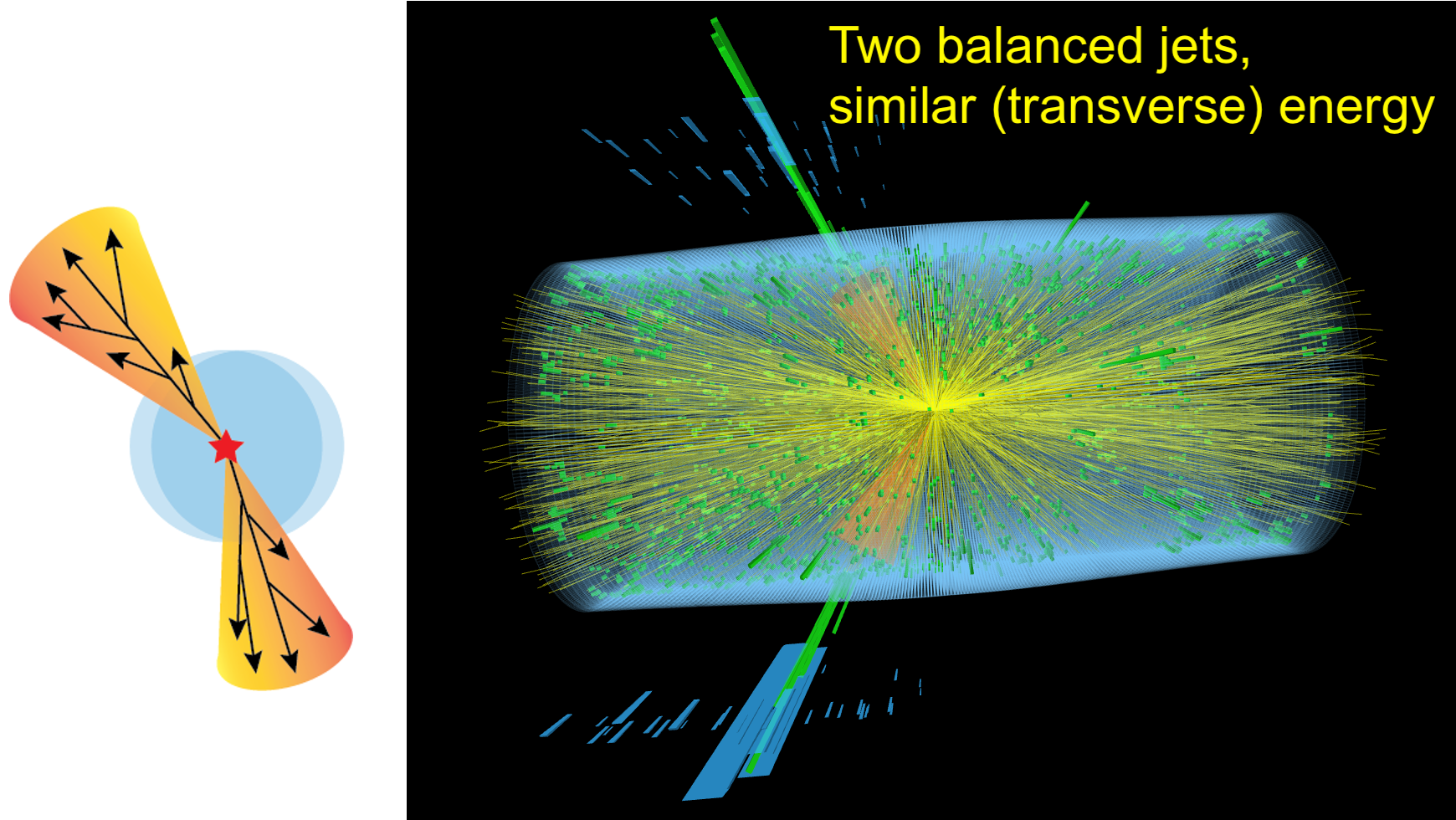 Figure 1: A sketch (left) and an event display (right) of a balanced dijet configuration in central heavy-ion collisions. The sketch is drawn from a beamline perspective while the event display gives a side view.

The sketches on the left side depict the colliding nuclei (blue circles) with the interaction region highlighted in a darker color and the collision point, from which the dijet emerges, with a red star. The longer the path within the medium, the more energy the jet is expected to lose. Thus, if both jets traverse a similar amount of plasma, they both are expected to lose a similar amount of energy on average, and be detected with lower, but still balanced, momenta. However, if the dijet is created near the plasma's surface, the side that travels through most of the medium would suffer more loss on average, disturbing the momentum balance. The event displays on the right side of figures 1 and 2 show how this looks in practice in the detector. In Figure 1, similar amounts of energy (green and blue towers) are measured in the two bunches, while in Figure 2, one of the jets contains significantly more energy than the other. 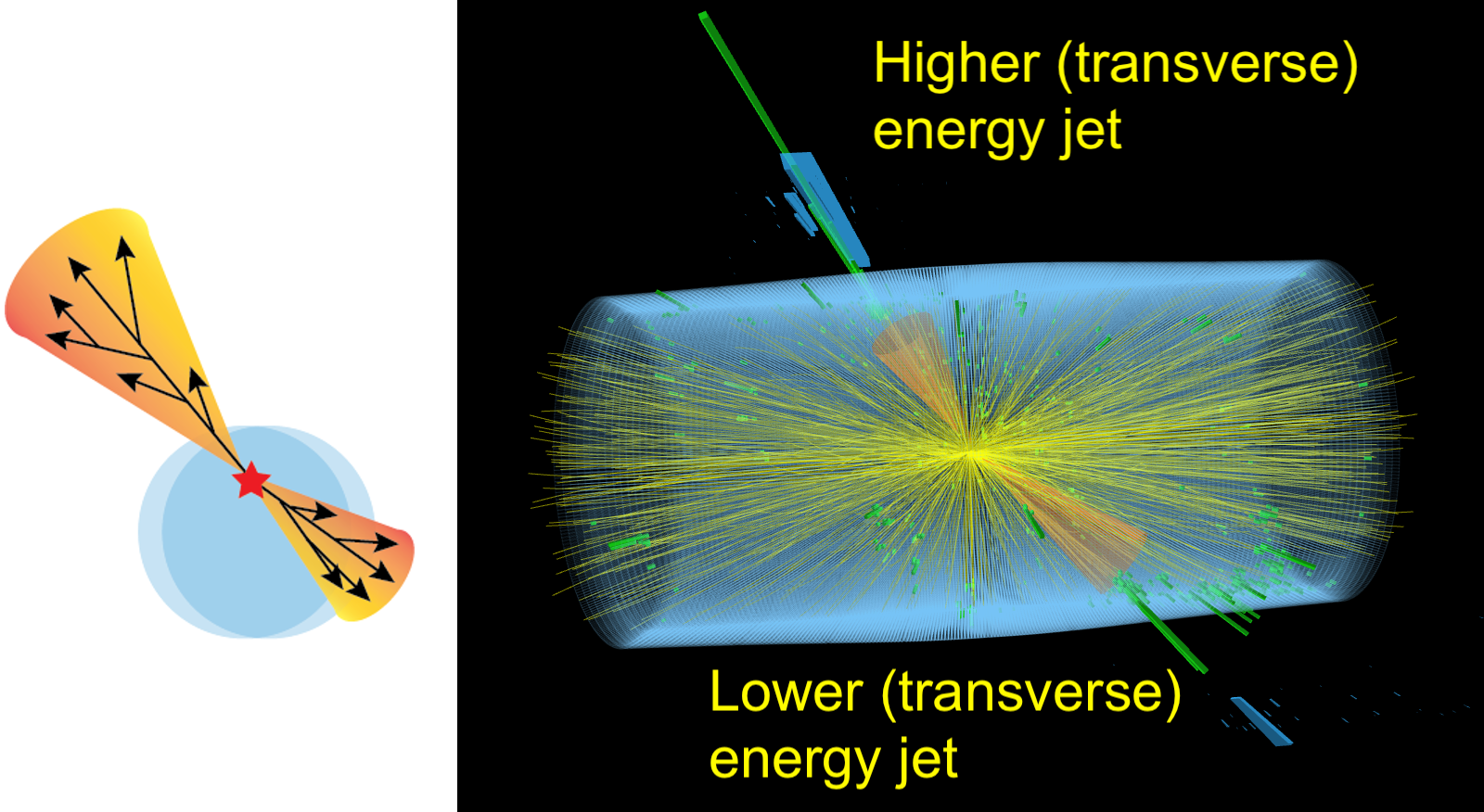 Figure 2: A sketch (left) and an event display (right) of an unbalanced dijet configuration in central heavy-ion collisions. The sketch is drawn from a beamline perspective while the event display gives a side view.

In the new dijet analysis of heavy ion collision data, we study a variable called the jet shape. The jet shape measures the momentum of particles that make up the jet in rings around the center of the jet. This variable is well suited for studying the jet energy loss within the quark-gluon plasma. It allows capturing redistribution of energy in momentum and distance from the center of the jet.

To best quantify the modifications caused by the presence of quark-gluon plasma, we compare lead-lead collisions to simpler proton-proton events. The ratio of the jet shapes of the leading jet when comparing peripheral lead-lead collisions and proton-proton collisions is shown in Figure 3. The same distribution from central collisions is shown in Figure 4. The glancing, peripheral heavy-ion events in Figure 3 show only minor jet shape modifications with respect to proton-proton collisions. The difference is much larger in central collisions in Figure 4, where more quark-gluon plasma was created. As the jet constituents interact with the plasma, they get deflected farther from the center of the jet, creating the observed modifications. The figures also show that collisions where the jets are more balanced are modified more than unbalanced ones.

These observations are consistent with the hypothesis of path length affecting how the jet shape is modified in the quark-gluon plasma and, for the first time, allow quantifying the effect. The results indicate that an unbalanced dijet is more likely to be produced near the plasma's surface, leading to only minor energy loss for the leading jet while the other jet will need to cross the plasma. On the other hand, the production point is more likely to be deeper in the plasma for balanced configurations, leading to comparable energy loss for both leading and subleading jets. 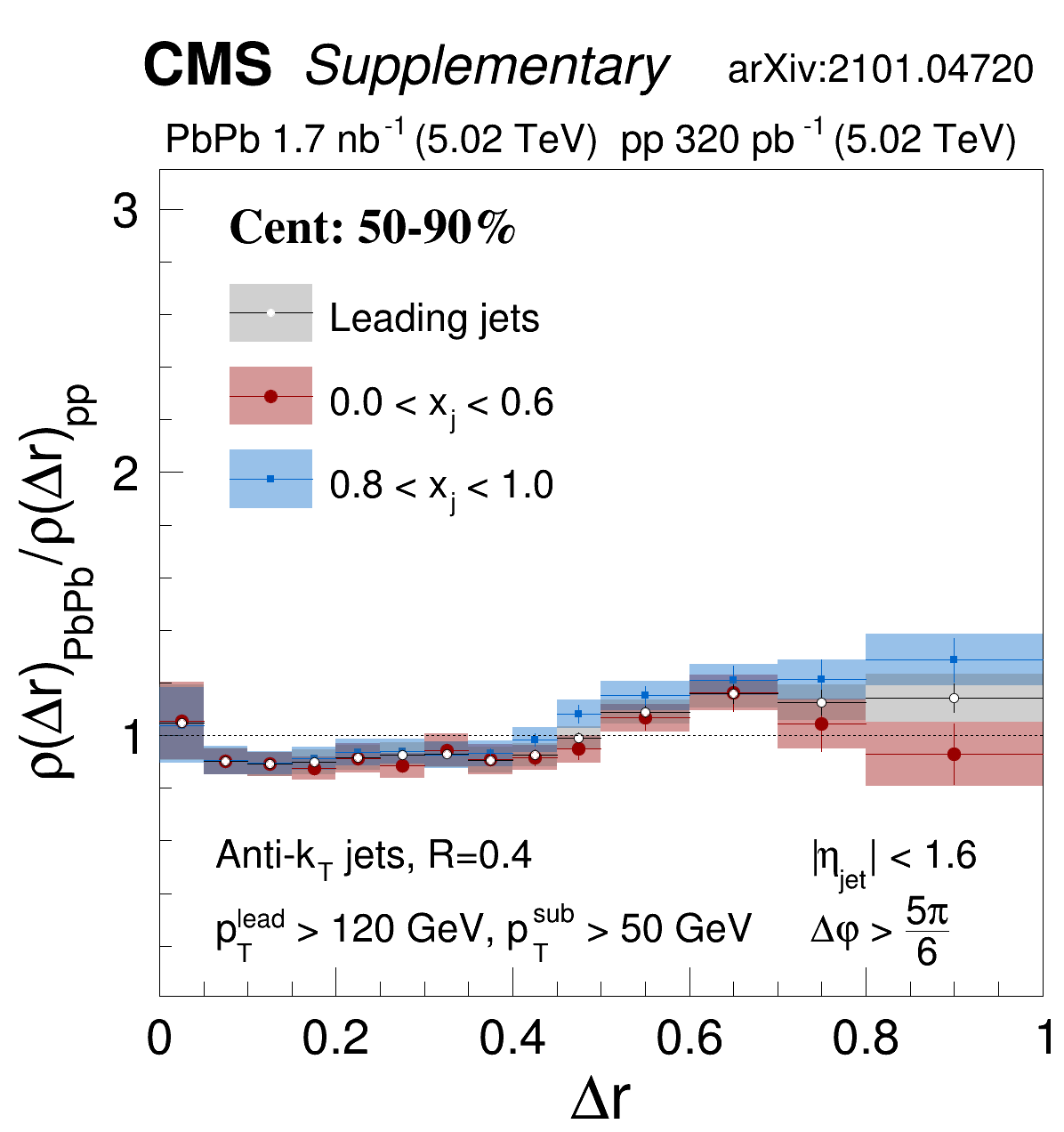 Figure 3: The ratio of leading jet shapes in peripheral lead-lead collisions to those in proton-proton collisions. The total jet shape modification for dijets without momentum balance selection is shown in gray, while results for unbalanced (0.0 < xj < 0.6) and balanced (0.8 < xj < 1.0) momentum configurations are shown in red and blue symbols, respectively. 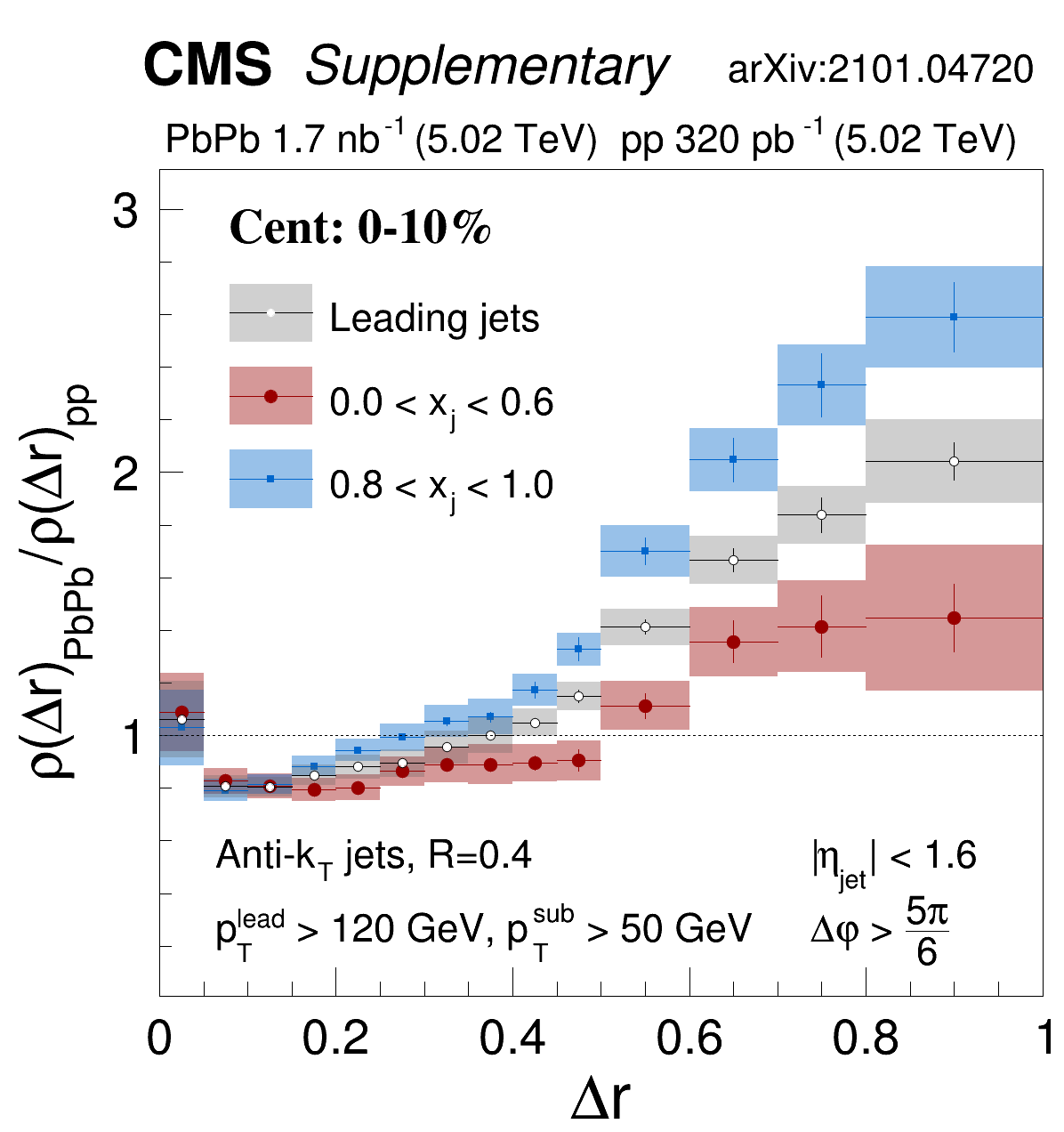 Figure 4: The ratio of leading jet shapes in central lead-lead collisions to those in proton-proton collisions. The total jet shape modification for dijets without momentum balance selection is shown in gray, while results for unbalanced (0.0 < xj < 0.6) and balanced (0.8 < xj < 1.0) momentum configurations are shown in red and blue symbols, respectively.

This new work is the first study in which the dijet momentum balance is used to select different dijet configurations for a jet shape modification measurement. It gives a unique input for understanding the interaction strength and the energy loss within the quark-gluon plasma. Deciphering this critical aspect of the early universe matter recreated in the laboratory provides a unique opportunity to study in great detail the strong force, one of the four fundamental forces in nature, under extreme conditions. With the upgrades made to the LHC, the future heavy ions runs will allow for more precise measurements of the particle momenta and dijet momentum balance and will make it possible to identify the different kinds of particles inside jets. Together these will further deepen our understanding of the properties of quark-gluon plasma.