Leptons Popping out of Thin Air 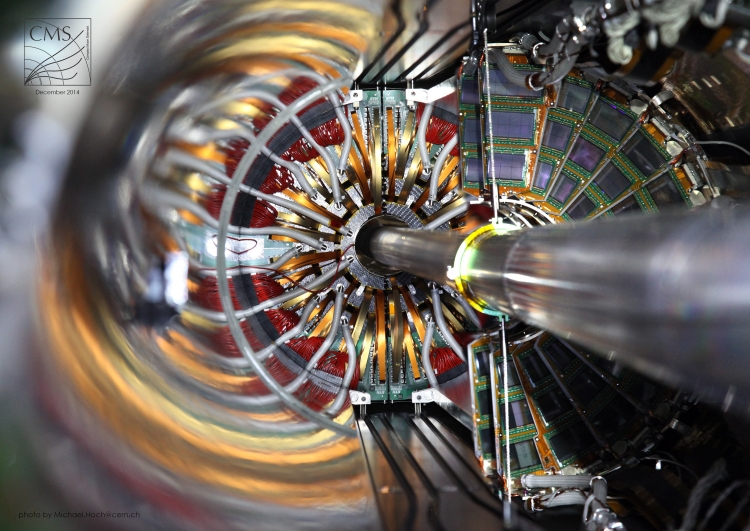 CMS casts a wide net in the hunt for undiscovered particles

Physicists at the CMS experiment have been searching for new particles in exciting new places. In a recently published paper, they explore the possibility that the Large Hadron Collider (LHC) could be producing never-before-seen particles that travel into the CMS detector before transforming into known particles. And because no one knows for sure what undiscovered particles might look like, the scientists design the search to be as simple as possible to make sure it can test many theories at once, including ones that have yet to be imagined.

Before diving into this new study, let’s set the stage: experiments over the last several decades have produced piles and piles of evidence that support a theory known as the Standard Model, which describes every particle we’ve found so far. And even though all of these experiments tell us that the Standard Model is among the truest things that humans have ever known, physicists are pretty sure that there must be more to the story. The Standard Model fails to explain important things like how gravity works or what dark matter is made of, so another theory (and probably new kinds of particles) must be out there.

To discover what lies beyond the Standard Model, LHC scientists use protons, one of the two kinds of particles that sit in the center of every atom in your body. Bunches of protons are sent in opposite directions around the 27 km LHC ring at 99.999999% of the speed of light and then smashed together at four points around the ring. The incredible speed imbues each proton with enormous energy, and because E = mc2, this energy can be transformed into new particles when the protons collide. The LHC is the highest energy particle collider ever built, so it’s possible that some collisions will produce particles that no one has ever seen or even imagined. To study the particles that fly out of each collision, particle physicists use massive detectors—CMS is the size of a four-story building and weighs twice as much as the Eiffel Tower—and smash protons together 40 million times every second to give themselves the best possible chance to observe rare and exciting collisions.

In this recent study, scientists at CMS explore precisely this scenario. They analyze the trajectories of well-understood particles called electrons and muons (collectively known as leptons) to determine if any appear to emerge from somewhere other than where the protons collide. The incredible CMS tracking detector allows the scientists to study distances from the collision that are as small as the width of a human hair or as large as the radius of a soccer ball. 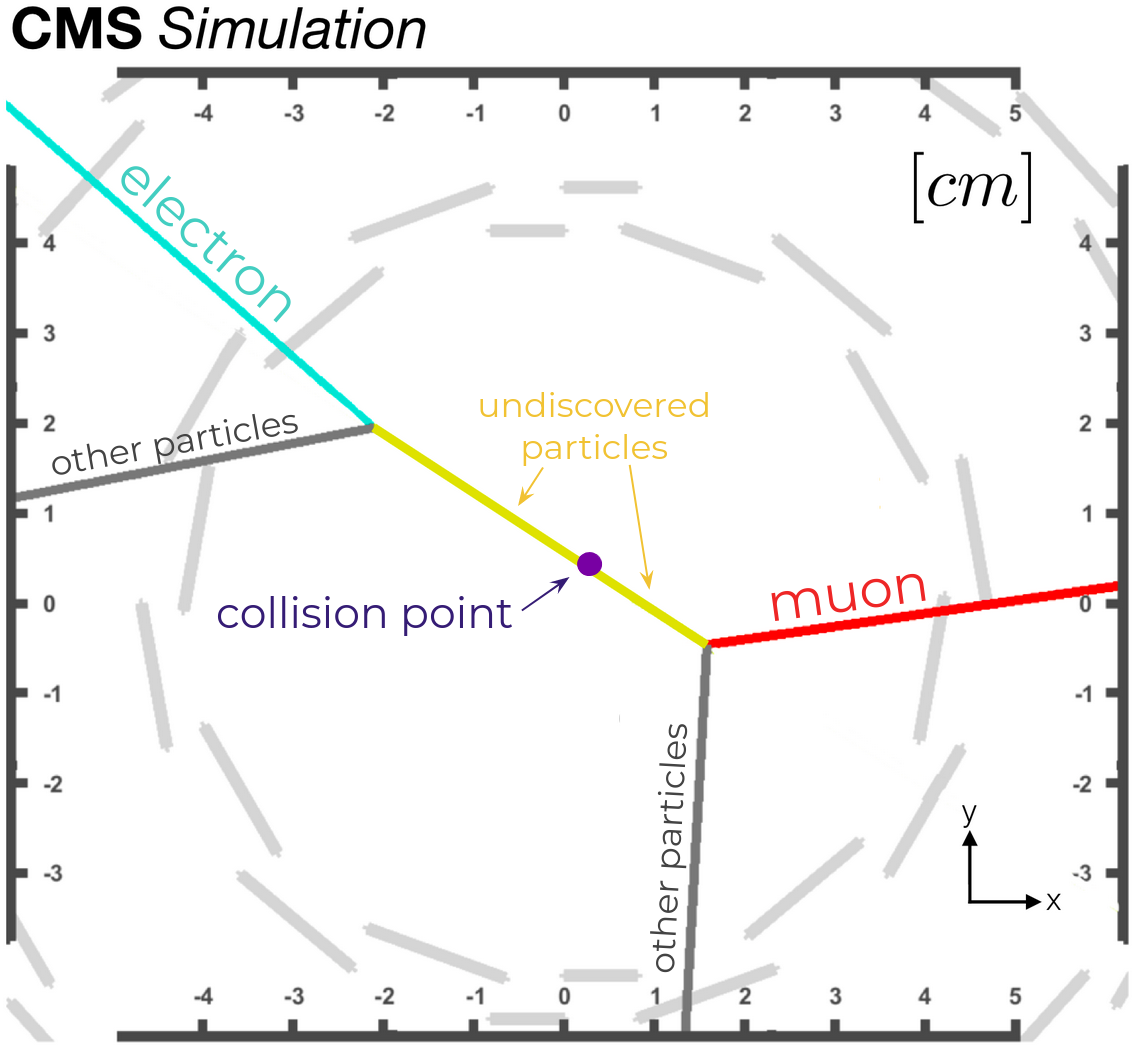 Figure 1: A simulated CMS proton-proton collision in which two undiscovered particles with long lifetimes (yellow lines) fly away from the proton-proton collision (purple dot) before transforming into an electron (blue line) and a muon (red line) and arbitrary other particles (grey lines). Physicists use simulated collisions like these to help understand what undiscovered particles might look like in the CMS detector.

But searching for particles with long lifetimes can be tricky. For this analysis, the scientists created new algorithms to determine which collisions to analyze and utilized a unique technique to estimate how many leptons look like they come from undiscovered particles when really they just come from the Standard Model particles we know and love. They even used particles produced by high-energy protons from space to study how CMS responds to particles far away from the proton-proton collision. Most importantly, the scientists kept an open mind about the nature of undiscovered particles: this new search could discover particles that can transform into any combination of electrons or muons and appear alongside any other kinds of particles or detector signals. 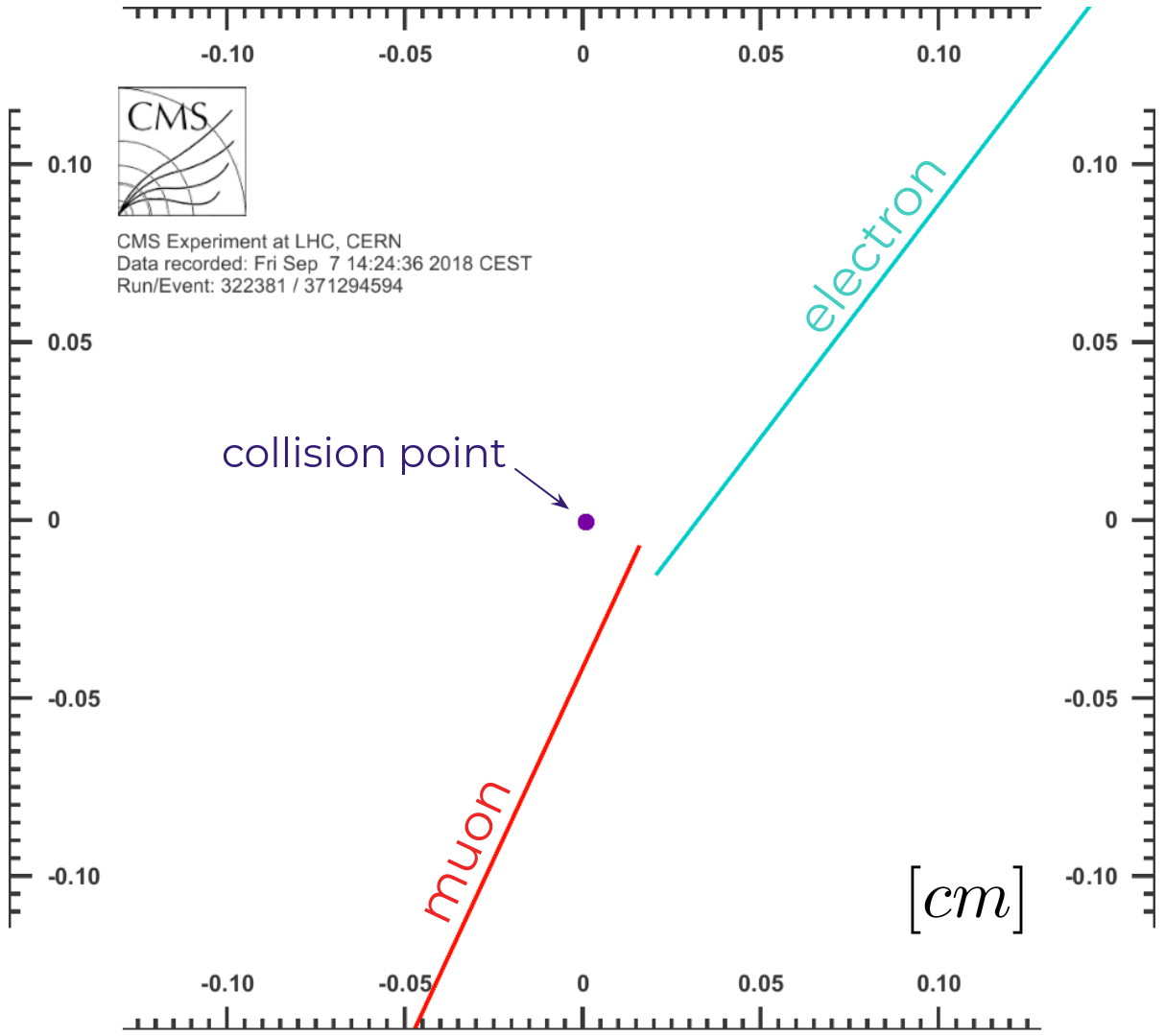 In the end, the number of leptons that look like they emerge from somewhere other than where the protons collide is just about equal to the number you would expect from the Standard Model alone. Such a result can be disappointing because it means no new particles have been discovered (yet!). At the same time, the result is exciting because the absence of new particles shows physicists which theories of new physics are possible and where best to look for new particles in the future.

As the LHC gears up for another run, the scientists at CMS are keen to continue the hunt for never-before-seen particles with long lifetimes. New algorithms and new ideas continue to lead to even more powerful searches, and upgrades to CMS and the LHC later this decade will allow CMS to collect more data in a single year than it has collected so far in its entire lifetime! Guided by this new result and armed with new detector technologies, the scientists at CMS are ready for the challenge.