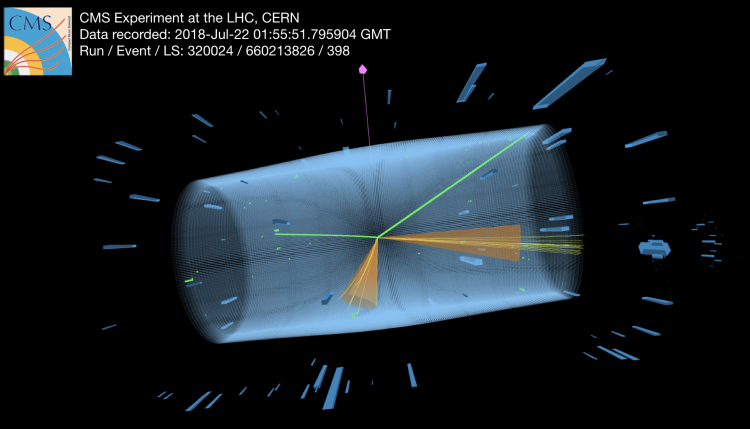 Since the LHC first began colliding protons over ten years ago, CMS physicists have hoped to find evidence for one of the most popular and expansive theories of New Physics -- Supersymmetry.   The key idea of Supersymmetry (or “SUSY”) is to add a new symmetry of nature, which implies that every Standard Model particle known so far has an as-yet-undiscovered supersymmetric partner particle. The idea of Supersymmetry is not a new one, but renewed excitement for it developed in 2012 when ATLAS and CMS discovered a Higgs boson. Supersymmetry predicts Higgs bosons with a light mass, and the boson discovered in 2012 fits that prediction.

As of today, no signs of SUSY were spotted in LHC data. On the contrary, many SUSY models at the energy scale explored by LHC have been ruled out, at least in their simplest realizations. Experimental searches are refined to tackle the most challenging scenarios, where SUSY might still lie undetected. One theoretically compelling and experimentally challenging scenario is a “compressed spectrum” of SUSY particles, where the lightest new particles have nearly-identical masses. In this case, nearly all of the energy released in the decay of the heavier particles is converted to the mass of the lightest SUSY particle. Hardly any energy remains for the only decay products visible to the CMS detector: the leptons and the jets.  Among these, the low-energy electron and muon leptons are the most distinctive signs of the SUSY signal, so their proper identification is the critical experimental challenge. 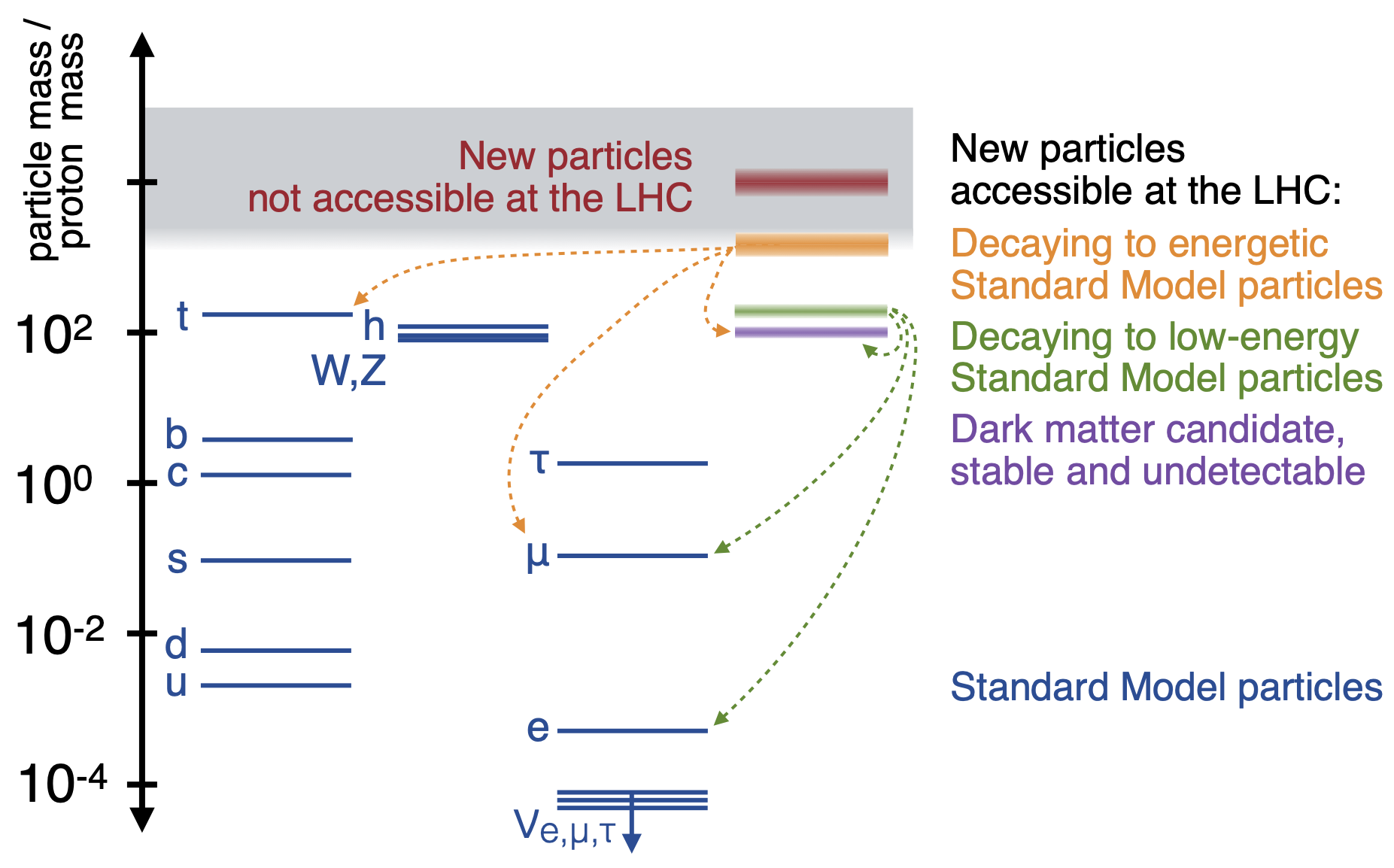 Compressed spectra arise in Supersymmetry most naturally in the case of “Higgsinos”: the partners of the Higgs boson that was discovered in 2012.  These are three new particles with similar properties to the Higgs boson and whose masses differ by a small but measurable amount.  For example, we might expect them to have masses 120, 125, and 130 times heavier than the proton, but the exact values can only be discovered by experiment!  As the Higgsinos do not interact directly with protons, they should be produced at low rates, and thus years of data collection are necessary to search for them. 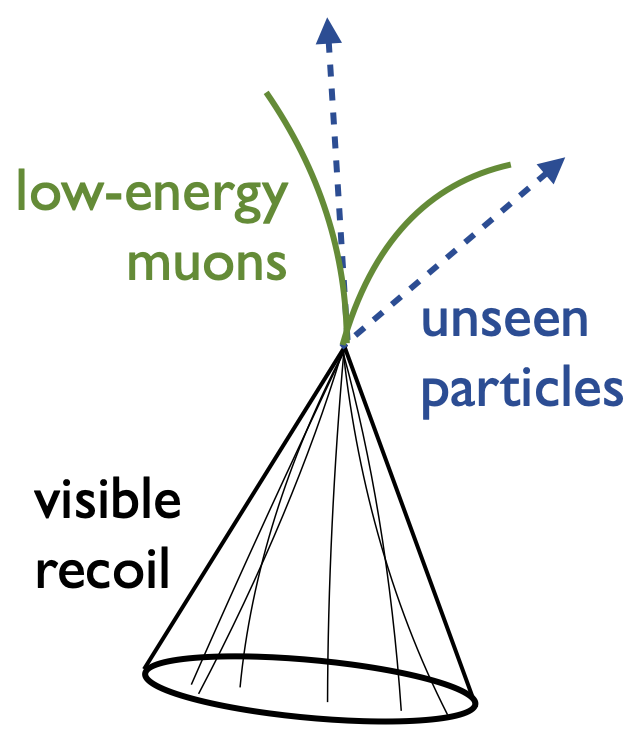 To expose these Higgsinos that leave no energetic mark of their own in the CMS detector, physicists use a principle dating back to Newton: each action must be met with an equal and opposite reaction.  So while it is impossible to see dark matter particles produced on their own, the trick is to create them together with an easy-to-see Standard Model particle, such as a quark.  In the CMS detector, such an event would produce a single “jet” of very energetic particles, with nothing seen on the opposite half of the detector, illustrated in Figure 2.  However, the principle of opposite and equal reaction tells us that something must have been present -- to balance the visible energy; this is the signature of the presence of particles invisible to the detector.

However, Higgsino hunters have one more tool in their chest.  The slightly-heavier neutral Higgsino would be unstable.  The decay of this particle (called “χ02”, the χ is the greek letter "chi") to the lightest Higgsino (χ01) may proceed by emitting visible particles, such as the pair of leptons shown in Figure 3.  The difference of the neutral Higgsinos masses m(χ02)-m(χ01) is imprinted onto the visible particles. Observation of lepton pairs with minimal mass-energy would be a smoking-gun signal for Higgsinos. 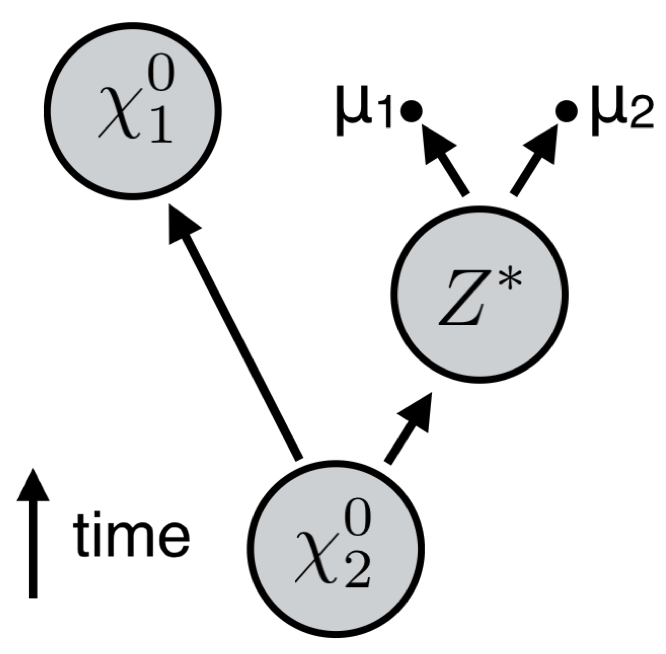 Figure 3: The decay process of the heavier Higgsino χ02 to the lighter SUSY particle χ01 via emission of a muon pair.

High-energy muons may be the easiest-to-measure particles at CMS (the experiment is, after all, the Compact MUON Solenoid).  However, measurements of low-energy leptons must contend with a highly-challenging source of backgrounds.  Heavy hadrons, cousins of the proton and neutron, are produced copiously in LHC collisions and can decay to muons and electrons that "fake" the Supersymmetry signal.  However, these unwanted decay muons and electrons often do not point back to the original proton collision. They also tend to be accompanied by extra particles. These characteristics can be used to reject this challenging background. 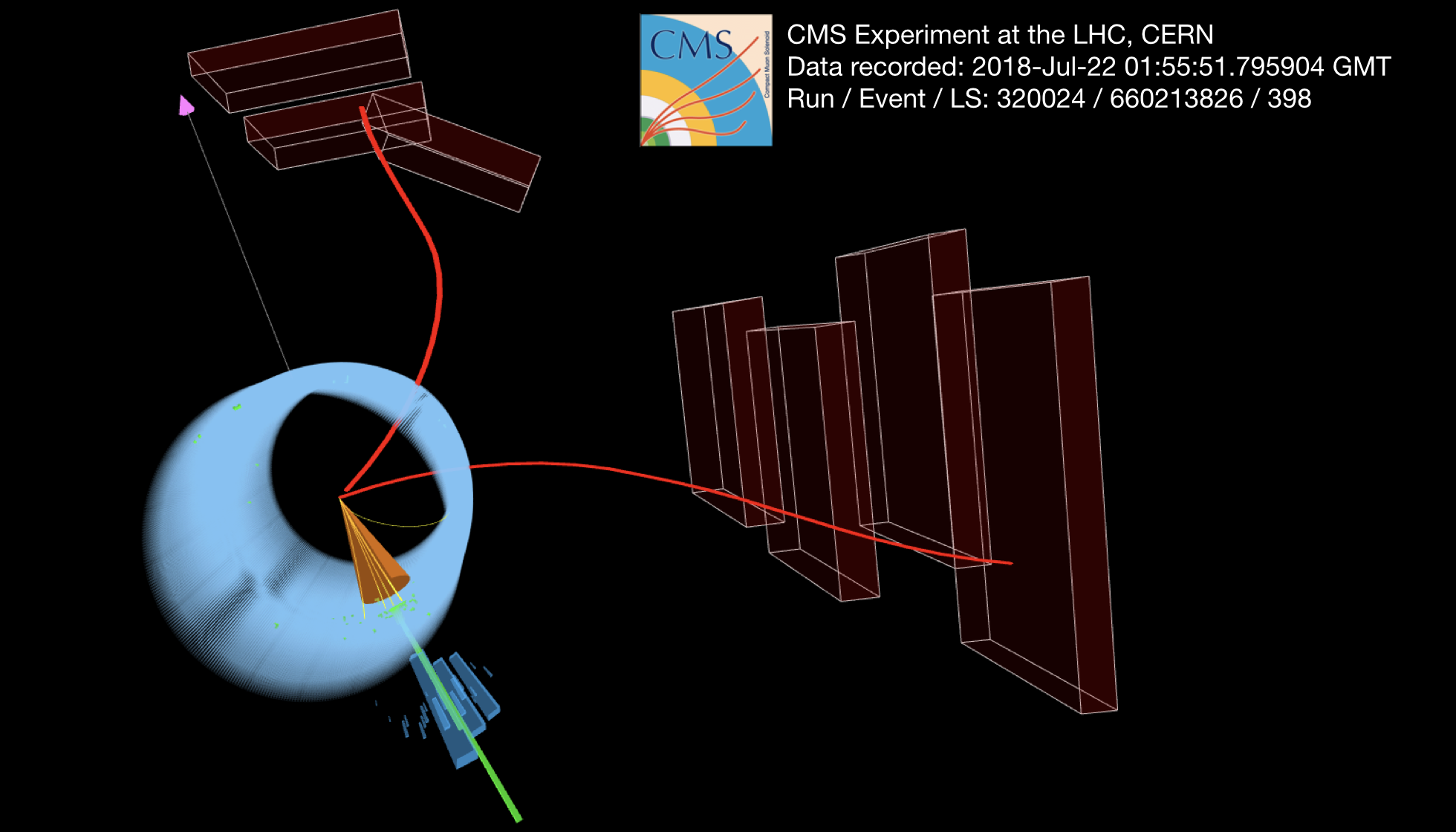 Figure 4: A reconstructed event that passes all of the Higgsino search selection criteria. An energetic jet (orange cone) containing charged particle tracks (yellow) and deposits in the electromagnetic (green) and hadronic (blue) calorimeters recoil against the inferred missing energy (purple arrow).  Two low-energy muons (red lines) travel from the interaction point, bending and reversing upon themselves as they pass through alternating magnetic fields before entering the muon system.

Combing through the dataset collected in 2016-18, the number of events we observe is consistent with the decays of known particles that look very similar to the Higgsino signature.  Figure 4 pictures one such collision, illustrating the low-energy muons and energetic jet observed in the CMS detector.  Figure 5 summarizes the final search results when selecting events with a pair of electrons or muons, shown as a function of the two leptons’ combined mass.  The estimated background processes (shown in stacked, filled histograms) are kept to low levels down to low masses, where the signal (shown in thick, overlaid lines in red, yellow, and green for various Higgsino masses) is expected to be.  Overlaid in black points are the numbers of events observed with the CMS detector over all three years. The consistency between the data points and the estimated background leaves little room for any Higgsino signal.

Because Supersymmetry does not precisely predict the Higgsino masses, results are interpreted in terms of the Higgsino mass values that this latest data can rule out.  Figure 6 shows the interpretation in terms of the mass of the heaviest Higgsino (χ02) and the mass difference between the two neutral states (χ02-χ01).  This analysis excludes Higgsino masses up to 210 GeV when the mass splitting between the two neutral states is 10 GeV.  For very compressed models with mass differences as small as 3 GeV, Higgsinos are excluded when χ02 is as massive as 150 GeV. 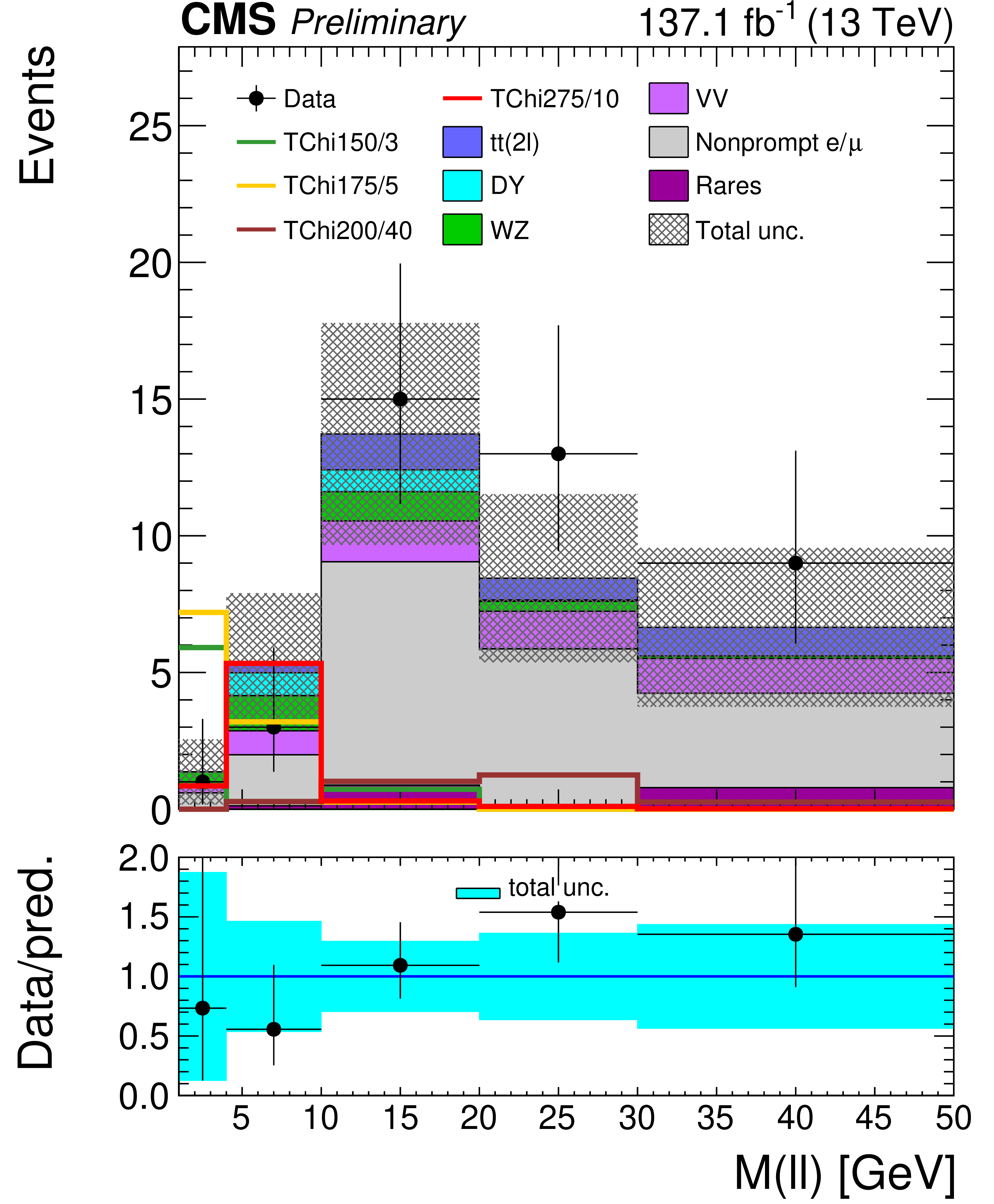 Figure 5: The summarized results of the Higgsino search with two leptons, showing the two-lepton mass distribution. The coloured histograms indicate the number of predicted background events. The expected contribution from the particular Higginso Supersymmetry considered here is overlaid in heavy, colored lines for several possible SUSY particle masses. The two numbers that describe the different signals indicate the mass of the heaviest Higgsino and the mass difference between the two Higgsinos. Data recorded by the CMS detector is shown in black points and agrees with the predicted backgrounds. 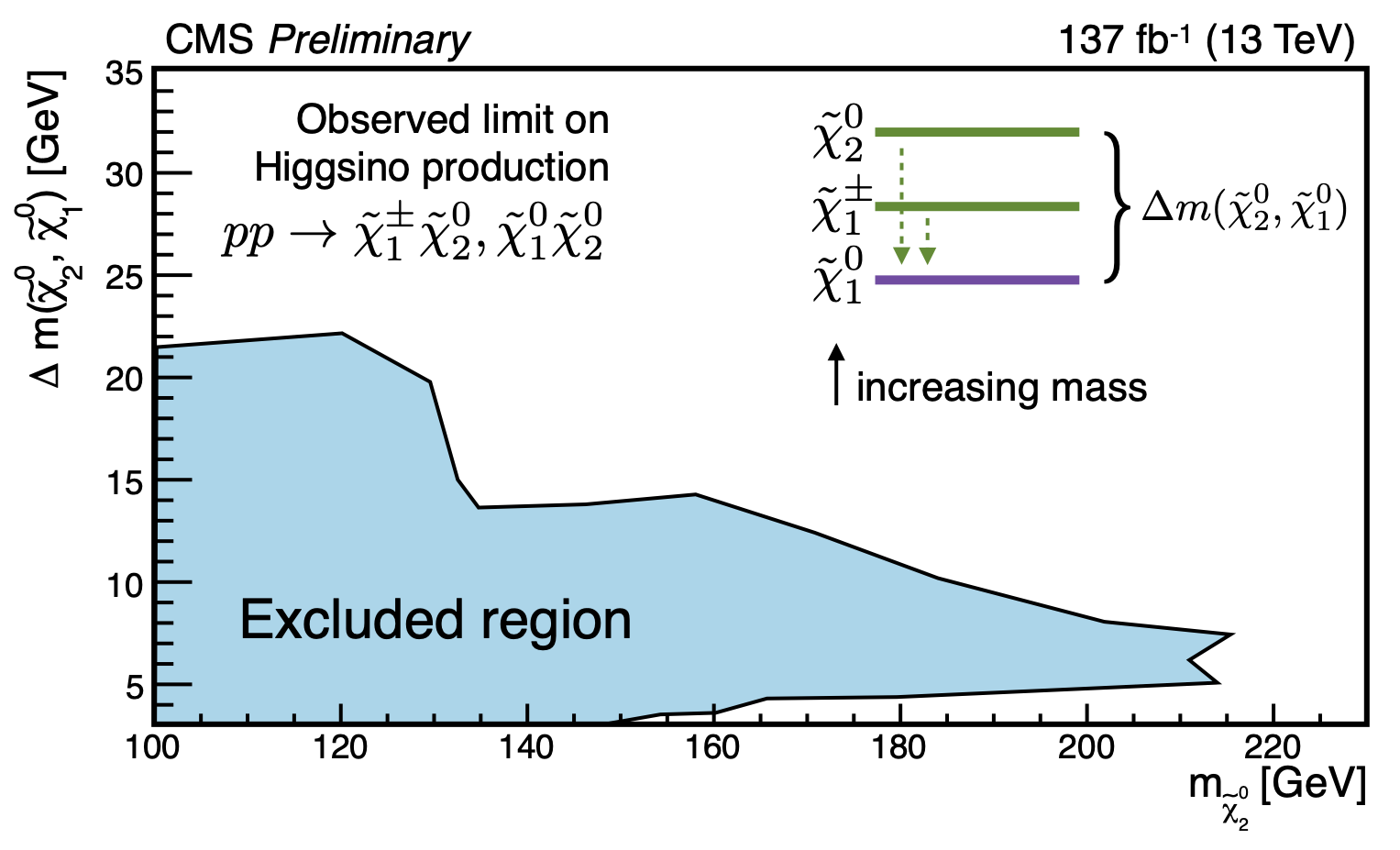 Figure 6: Search results are presented in terms of the Higgsino model under different assumptions on the masses of the new states.  The x-axis corresponds to the mass of the heavier neutral Higgsino χ02, with high-mass particles more challenging to exclude due to lower production rates.  The y-axis corresponds to the χ02-χ01 mass difference, with lower values leading to the more challenging “compressed” scenarios. Points within the heavy black line correspond to models excluded by this result.

So is this it for SUSY partners at the LHC? Even the search described here has left behind some areas in which SUSY could still be hiding.  Heavier higgsinos and more extreme mass splittings are clear future targets.  A more exotic possibility is that the Higgsinos travel for a short distance before they decay to the low-energy leptons. In that case, the current analysis would not see them, but this could be remedied by also selecting leptons that are produced a short distance from the LHC collision point.  Lastly, new opportunities will arrive with the LHC restart in 2022, major detector upgrades in 2026, and the collection of a 20x larger dataset over the course of the high-luminosity LHC.  More proton collisions will bring the possibility of uncovering increasingly rare signals, including higgsinos too heavy to reach with the current search.  This fast-growing sample of high-quality data, together with new and inventive analysis methods, will help CMS physicists accelerate the search for higgsinos at the LHC!