New for Moriond: Quarks: The Next Generation?

Since the discoveries of the third generation of quarks and leptons starting in the 1970s, physicists have asked the natural question "Can there be more generations?".  One of the first key results from the Large Electron Positron collider LEP thirty years ago was that there are only three generations of neutrinos, the nearly massless neutral leptons.  Nevertheless, the search for new heavy fourth-generation quarks is still continuing at the LHC.

Recently CMS researchers have completed a search for these oddball quarks, called 'vector-like quarks', using a new machine learning method that exploits Einstein's relativity in a novel way.  If these new quarks, denoted by a capital T, exist, they can decay in one of three main ways: to a bottom quark and a W boson, to a top quark and a Z boson, or to a top quark and a Higgs boson.  As the top quarks and W/Z/H bosons themselves decay, production of a pair of T quarks (a T and an anti-T) could lead to dozens of different final states.  While most previous searches for T quarks have focused on one or just a few of these, this new analysis searches for 126 different possibilities at once.

The key to classifying all the various final states is the ability to identify high energy top quarks, Higgs bosons, and W and Z bosons which decay into "jets" of particles recorded by the detector. Einstein's relativity comes into play because, in the reference frame of the CMS detector, these particles produce wide jets which all look alike, but if we look at the particles making up the jet in a frame of reference in which the initial particle (W/Z/H bosons, or top quarks) is at rest, things look very different.  In the correct "boosted" frame of reference, a Higgs boson, for example, would appear as two well-collimated back-to-back jets of particles.  In the incorrect reference frame, at the wrong velocity, there may still be two jets, but they would no longer be back-to-back. To put it simply, Einstein's special relativity tells us how to transform the way these "fat" jets look in the laboratory to how they appear in a rest frame moving at nearly the speed of light.

Modern machine learning techniques are used to train a deep neural network classification algorithm using simulations of the expected particle decays.  Several dozen properties of the jets are calculated in different hypothetical reference frames, and are fed to the deep neural network, which classifies the original "fat" jet as coming from top quarks, H/W/Z bosons, b quarks, or light-flavor quarks (u/d/s/c) or gluons.  Then each event is classified according to how many of each jet type there are in the event.  At that point one simply counts the number observed in each category, and makes a prediction of the number of background events in that category, looking for an excess coming from T quark pair production.  The summed energy of all of the classified jets is used to discriminate signal events from background further. 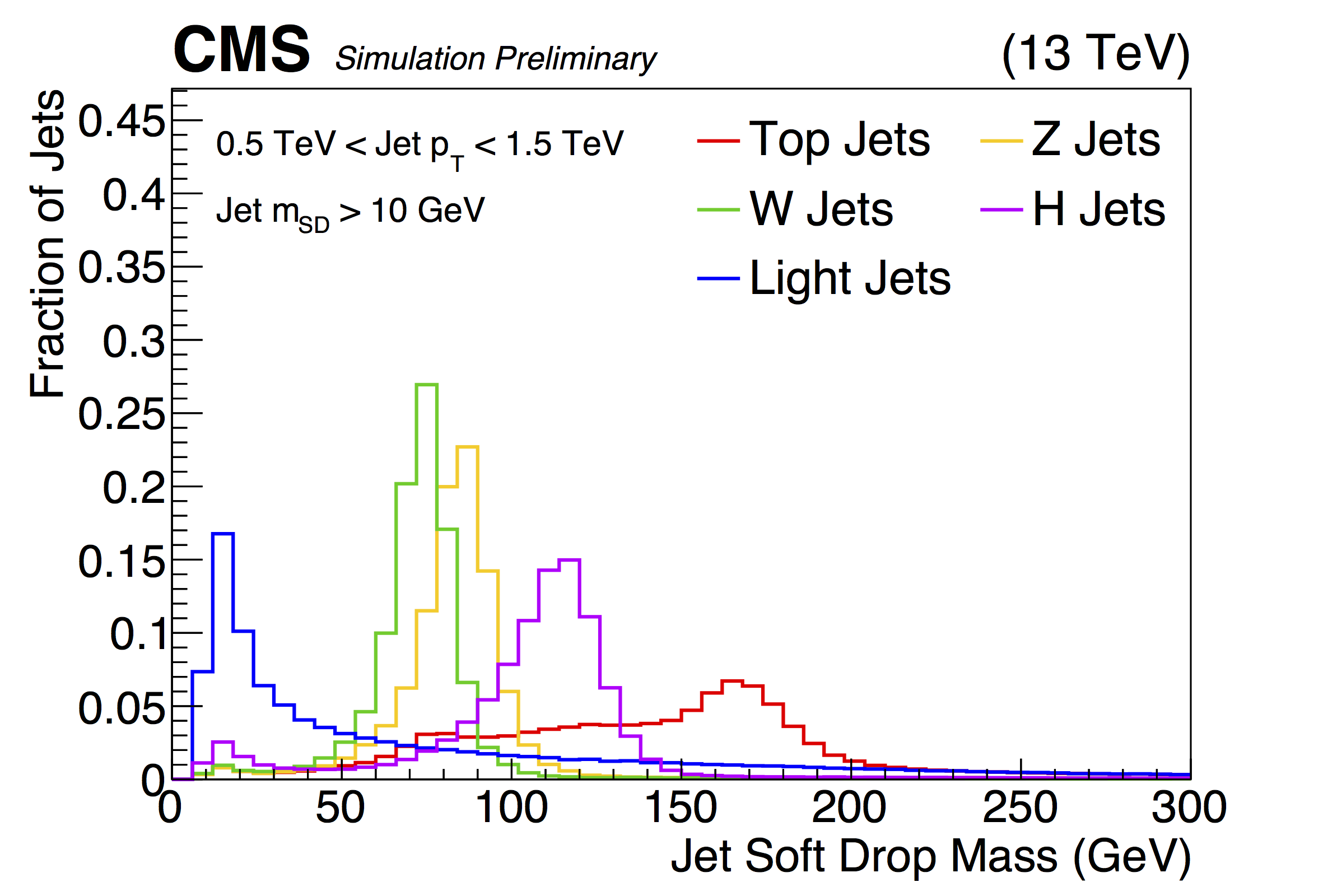 Alas, with the data collected in 2016 at the LHC, the CMS collaboration sees no evidence for T quark pair production and excludes T quark masses up to 1.37 TeV.  There are about four times more data to analyze from 2017 and 2018, and CMS physicists are working on new ideas to improve the classification method and extend the search to higher masses.