A new window into the shadow world: exotic particle decays in the muon detectors

As physicists seek the elusive particles that may reveal a new understanding of the universe’s inner workings, one intriguing possibility is the conceivable existence of new particles that live in a shadow universe, called the “dark sector.” The dark sector is assumed to communicate with our more familiar matter only through extremely weak interactions. Such hypothesized new physics scenarios are often called Hidden Valley models because the dark sector and our world can be imagined as two valleys separated by a large barrier. We cannot see past this barrier in our daily lives because it takes a tremendous amount of energy to surmount it. Proton collisions at the CERN Large Hadron Collider (LHC) may be powerful enough to provide the necessary energy to cross this barrier and produce a pair of particles in the dark sector. The small interaction strength between the hidden and our world means that transformations, or decays, of these exotic particles back into our world’s known particles, have an extremely low probability. Therefore, the dark sector particles continue traveling for a long time and traverse several meters before tunneling back quantum mechanically into our visible universe. They then decay into more familiar and visible signatures of quarks or leptons. Communications between the dark sector and our world are carried by a “messenger.” The Higgs boson is likely to be one of the candidates for this messenger role.

A wide range of theoretical models predict particles that travel a substantial distance before decaying, and therefore they are often called long-lived particles (LLPs for short). By analyzing LHC collision data, physicists at the CMS experiment recently established that it could be strikingly observed using the muon spectrometer. The muon spectrometer consists of gas detectors sandwiched between thick layers of steel and is located in the outer part of CMS where typically only muons are detected as all other measurable particles are absorbed by the central part of the detector already. When the LLP decays in the steel material, an expansive particle shower is produced and measured by the gas detectors as a concentrated outburst of signals, unlike anything that would happen for muons or other Standard Model processes typically occurring in the LHC collisions.

Figure 1: Interactive event display (try zooming/rotating!) of a proton-proton collision at a center-of-mass energy of 13 TeV recorded in the CMS detector. The event is a candidate for the production of a Higgs boson that decays into long-lived particles that shower (orange lines) in the cathode strip chambers (red boxes). The event also contains a jet (yellow cone) and missing transverse energy (pink arrow). Or view the interactive event display on this separate page.

The particle shower from the LLP decay would be reconstructed as a localized high-multiplicity cluster of gas detector signals. This experimental signature is very similar to the object most commonly produced in the LHC: jets, collimated showers of Standard Model particles. Like a jet in a calorimeter, an apparatus that measures energy, the LLP produces a shower in the muon stations, forming a cluster of measurements in many gas detector channels. Analogous to jets, the larger the energy of the LLP, the bigger the particle shower would be, resulting in more lit up channels in the gas detectors. This characteristic has never before been used as a viable signature for new physics searches. By employing this novel reconstruction technique, the muon spectrometer is repurposed as a calorimeter to identify LLPs with good purity and measure their energies. The thick layers of steel also help block background processes such as highly energetic quark or gluon jets that could “punch through” the other material and spill into the gas detectors of the muon spectrometer, yielding a highly pure sample of LLP decay signatures.

A critical piece in any search for deviations from the Standard Model is a robust method of distinguishing events that contain new physics (signal events) from those that mimic them (background events). The most common source of background events is long-lived particles that we already know about, such as the neutral Kaon (K-Long). These particles are copiously produced in LHC collisions and can sometimes traverse the whole volume of the CMS detectors without being detected. These backgrounds are estimated from dedicated data samples enriched in such events, and final analysis selections are optimized to minimize the likelihood of them “sneaking” into the final selection.

One of the most sensitive variables in the search is the number of hits in the cluster (Nhits): signal events tend to have bigger clusters. The distribution of this variable in the search region is shown in the figure below and shows no excess above the expected backgrounds. Strong constraints are placed on the proper decay length of the particle to be between 1 and 100 m. The search can detect the dark sector particles even when the Higgs boson decays to them only twice in 1000 times. 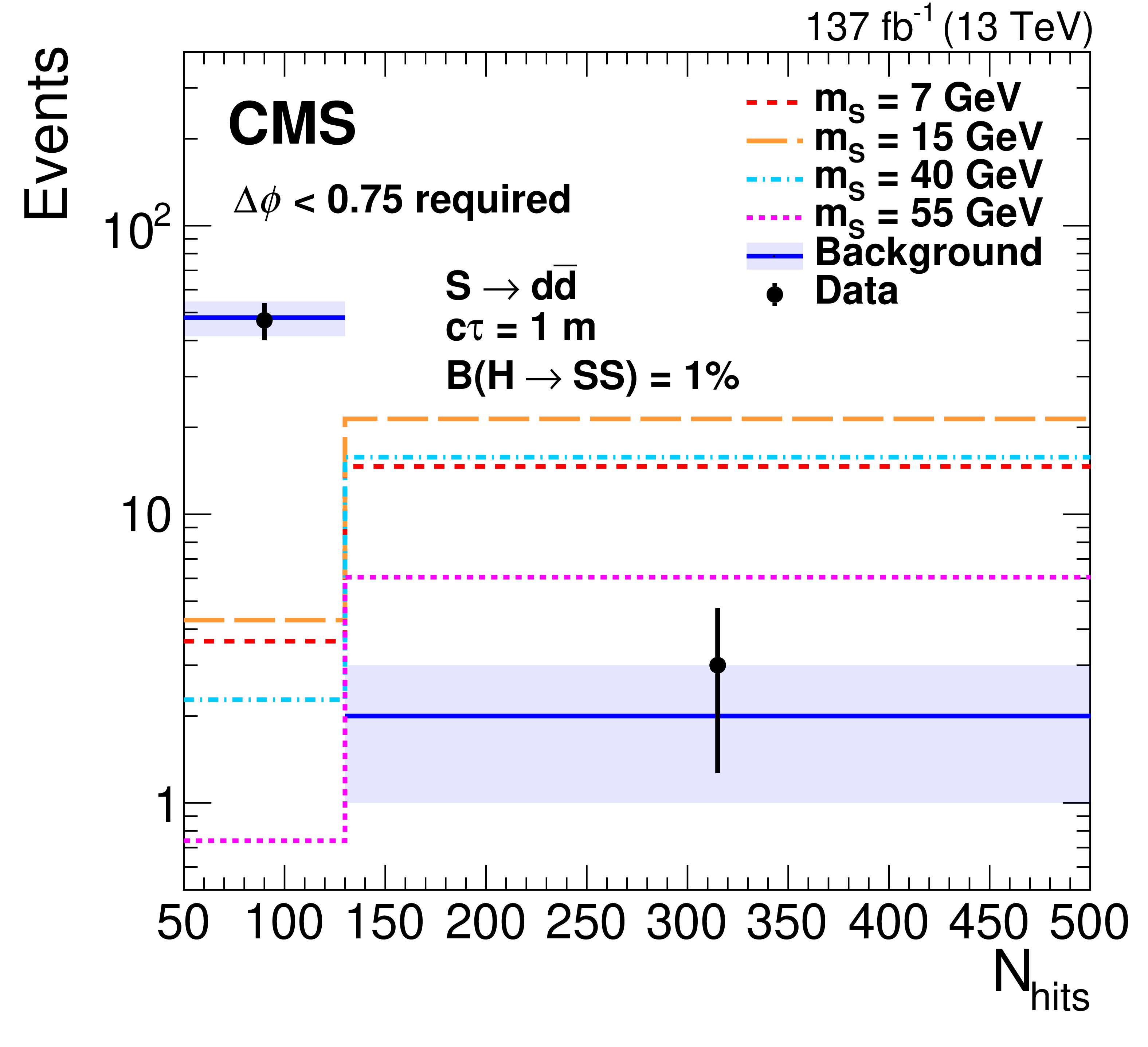 Figure 2: Distributions of the number of hits in the cluster (Nhits) in the search region. The background prediction is shown in blue, with the shaded region showing the background uncertainty. Signal models where the Higgs boson plays the role of the dark portal messenger are shown. The Higgs boson is assumed to decay to dark sector scalar particles with masses of 7 (red line), 15 (orange line), 40 (maroon line) or 55 GeV (pink line). In all cases, the branching ratio of the Higgs boson to the scalars is 1%, and the proper decay length (roughly how far they travel before decaying) of the scalar particles is 1 m. The data agree very well with the background prediction, which means there is no significant production of long-lived particles.

This result is just the first small step for the newly explored muon spectrometer particle shower signature. This exciting tool opens up a new program of searches for long-lived dark sector particles in a wide variety of new theoretical models, spanning not only Higgs portal models but also scenarios where the role of the messenger are taken on by other particles, such as neutrinos, axions, or the “dark photons.” A new LHC era will soon begin with Run-3 (2022–2024), which will double the amount of data collected. To fully explore the vast scope of theoretical models, we are developing dedicated “trigger” algorithms to select and preserve more collisions containing this striking muon spectrometer particle shower signature. This development is currently underway, and upon completion, these triggers will allow the CMS physicists to collect signal events more efficiently and increase our ability to detect dark sector particles by a factor of ten.