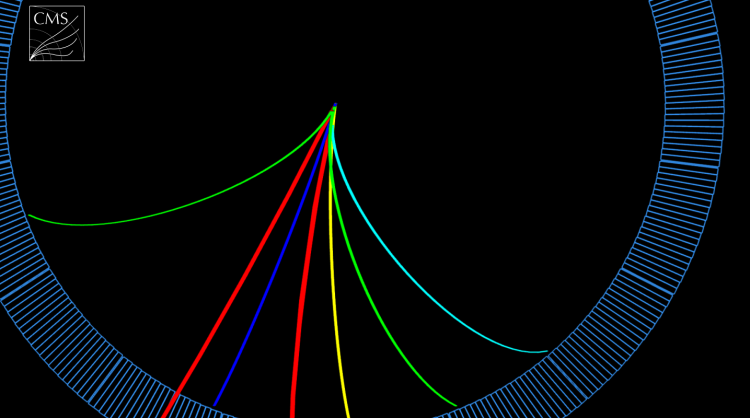 Quantum Chromodynamics (QCD) is the part of the Standard Model of Particle Physics that describes the strong interaction. At relatively low energies, the Constituent Quark Model is a phenomenologically successful effective method to describe composite particles (hadrons) as configurations of interacting quarks. There are different possibilities to combine quarks, for example, pairs of quarks (quark-antiquark), called mesons, or the combination made of three quarks, called baryons. A familiar example of a baryon is the proton and neutron, which form all the visible matter in the Universe, together with the electron. These particles, consisting of two up (u) quarks plus one down (d) quark for the proton, or one up and two down quarks in the neutron, respectively, have very similar but still slightly different masses. Particles that are different only by an up or down quark are called isodoublets and have identical quantum properties.

An example of an isodoublet built from other quarks is the Ξb (pronounced as Ksi-bee) baryon family, which contains particles comprised of three quarks, an up or down quark together with beauty (b) and strange (s) quarks. The neutral Ξb baryon, consisting of a set of (u,b,s) quarks, is called Ξb0, and its partner with a negative charge (set of (d,b,s) quarks) is called Ξb-. The Ξb baryons are not present in stable matter surrounding us. Still, they can be produced in high energy physics experiments, e.g. in the proton-proton collisions at the LHC, and are detected via their decay products using particle detectors, such as the CMS experiment.

Figure 1: Quark spin configurations for the lightest Ξb isodoublets, q corresponds to u and d quarks for Ξb0 and Ξb-, respectively. Several quantum numbers usually define the isodoublets: the spin jqs of a light quark pair (q,s) and spin-parity JP. How the quarks move around inside the particle is denoted by L, the orbital excitation.

The first Ξb baryons were observed at the Tevatron more than a decade ago with a mass of about 5800 MeV. However, this family also contains a lot of different so-called excited states. Their quark contents are identical, but how quarks are configured and interact with each other inside the particle is different. That interaction energy makes the masses of these excited states different (see Figure 1). Several of such excited states have already been discovered at the LHC with masses around 5950 or 6227 MeV. One of them is Ξb*0 (M = 5952 MeV), observed in the decay to a “simple” Ξb- and a positive pion at CMS.

The similar spectrum of different mass particles is also present in the charm analogues, Ξc baryons, where the b quark is substituted by the charm (c) quark. The lightest of their excited states decays to the Ξc π± or Ξc π+ π- particles. This analogy and the Constituent Quark Model predict that there should be an excited Ξb**- baryon, decaying to the previously observed Ξb*0 plus negative pion with the following Ξb*0 → Ξb- π+ transition. Basing on the successful discovery of Ξb*0 baryon with Run 1 data, the CMS Collaboration has searched for the Ξb** state decaying via the sequence Ξb**- → Ξb*0 π- → Ξb- π+ π-. The Run 2 data collected in 2016-2018 allowed the observation of a new Ξb(6100) baryon.

In the new analysis, the critical part is the reliable reconstruction of the Ξb-, the particle to which the Ξb**- decays. The Ξb- is identified in two signatures that rely on the J/ѱ meson: J/ѱ plus Ξ- baryon or J/ѱ plus Λ baryon plus a charged kaon. The signature is that these decays happen in cascades, this is why the Ξ is also sometimes called the Cascade baryon: J/ѱ goes to a pair of muons, detected in the muon chambers. In contrast, Ξ- (s,s,d) decays into a Λ baryon (u,s,d) plus a charged pion, and that Λ baryon finally decays into a proton and a charged pion.

Protons, muons, and charged kaons and pions leave curved tracks in the CMS tracker. In the magnetic field created by the superconducting solenoid after which the CMS experiment is named, charged particles change their direction. Hadrons as Ξb-, Ξ-, and Λ exist for a long enough time to create decay vertices that are significantly displaced from where they were produced, as shown in Figures 3 and 4. These decay vertices can be identified with the very precise tracking detectors of the CMS experiment. 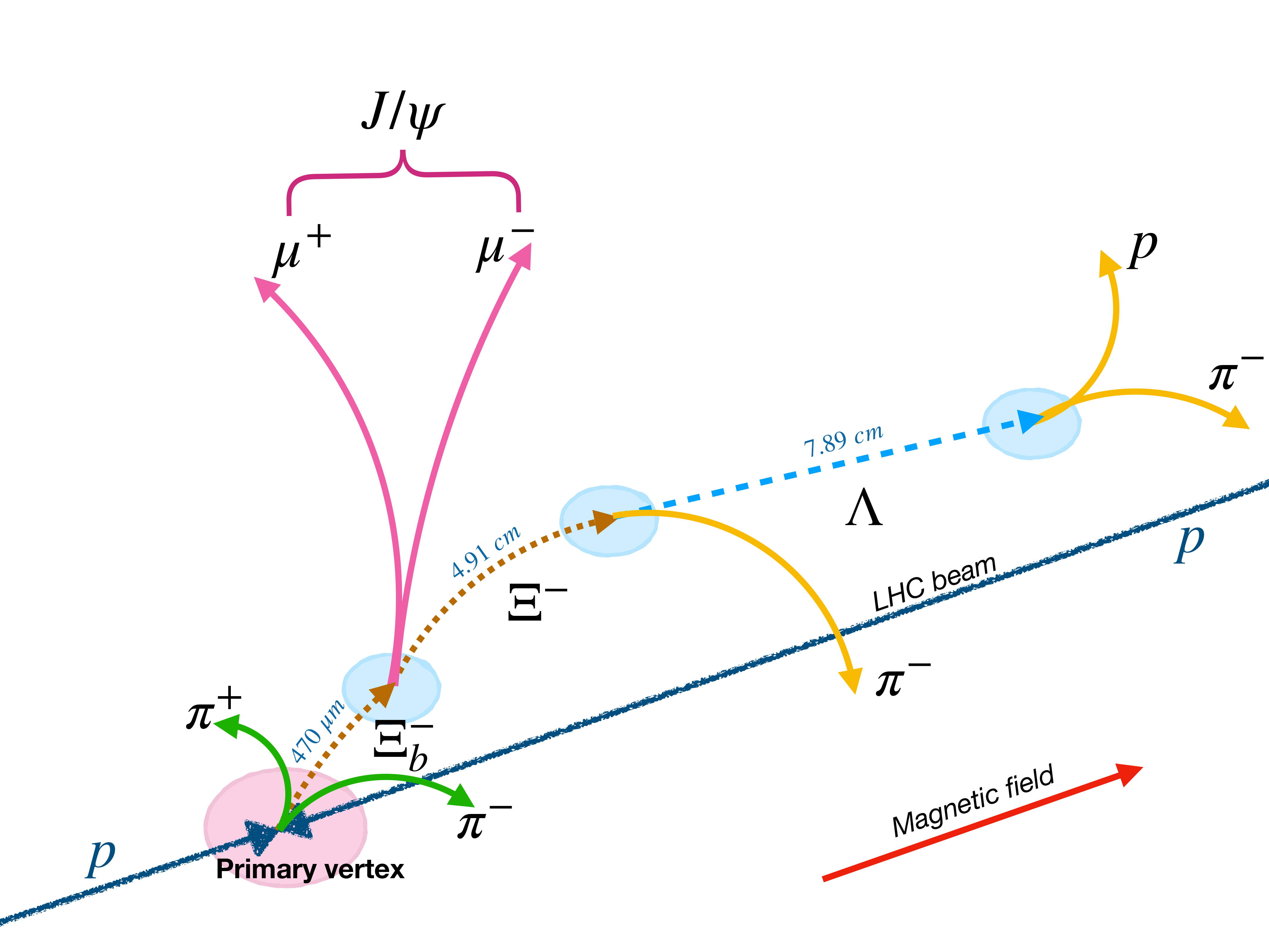 Figure 3: Ξb-(6100) → Ξb-π+π- decay topology, where Ξb- is decaying to J/ψΞ-. The red circle indicates the proton-proton collision area and the primary vertex location, blue circles are the location of the secondary vertices, where Ξb-, J/ѱ, Ξ- and Λ hadrons decay. Charged particle tracks are curved in the presence of the CMS magnetic field. 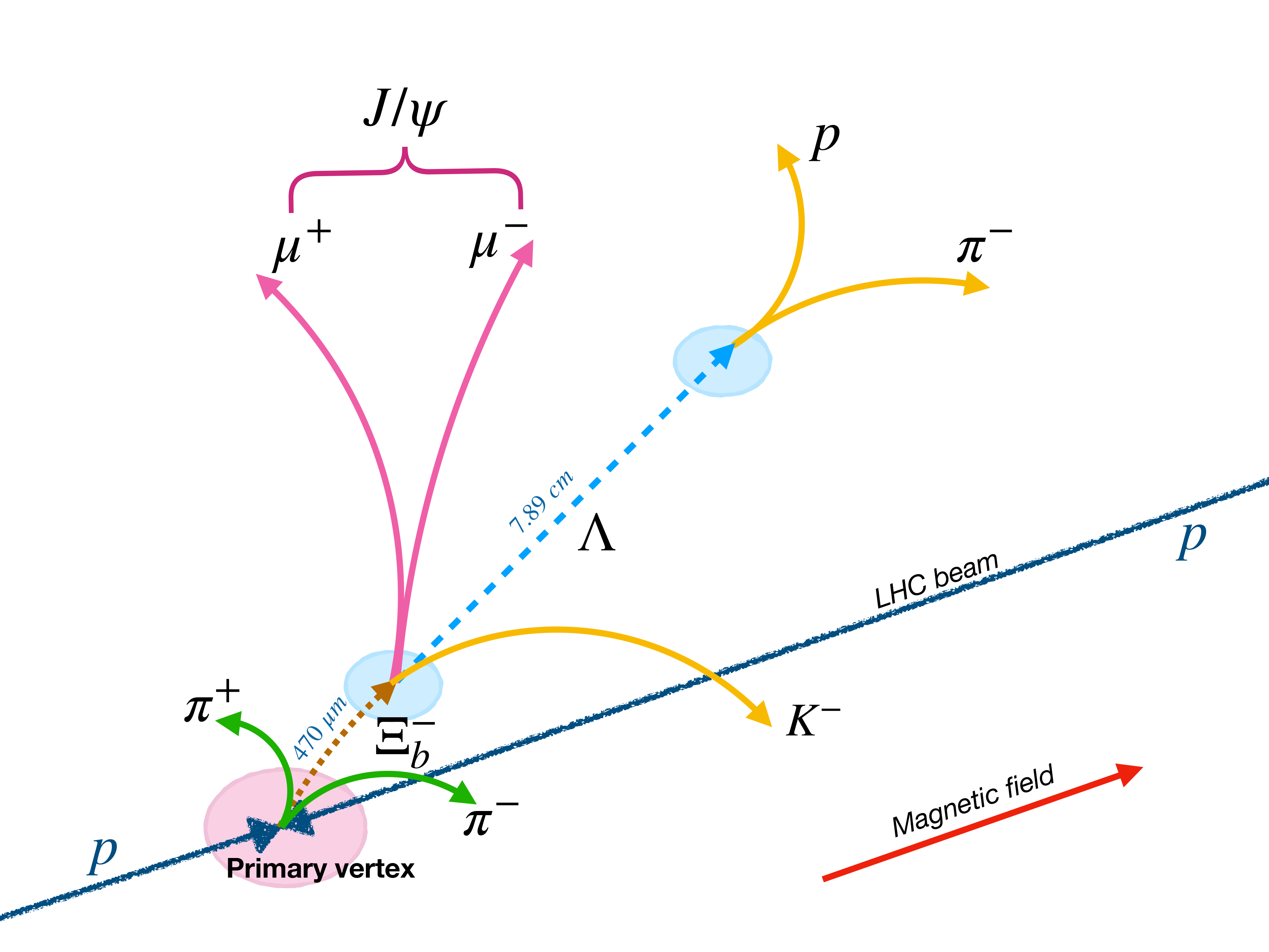 Figure 4: Ξb-(6100) → Ξb-π+π- decay topology, where Ξb- is decaying to J/ψΛK-. The red circle indicates the proton-proton collision area and the primary vertex location, blue circles are the location of the secondary vertices, where Ξb-, J/ѱ and Λ hadrons decay. Charged particle tracks are curved in the presence of the CMS magnetic field.

On the other hand, excited hadrons are expected to decay immediately at the collision point. To reconstruct the Ξb**- candidates, the reconstructed Ξb- baryon is combined with two opposite-sign pions, originating from the primary vertex. When the selected Ξb- π+ π- combinations are examined, a clear narrow peak is observed in the invariant mass spectrum, as shown in Figure 5. This peak corresponds to the first observation of a new Ξb**- particle with a mass of about 6100 MeV. 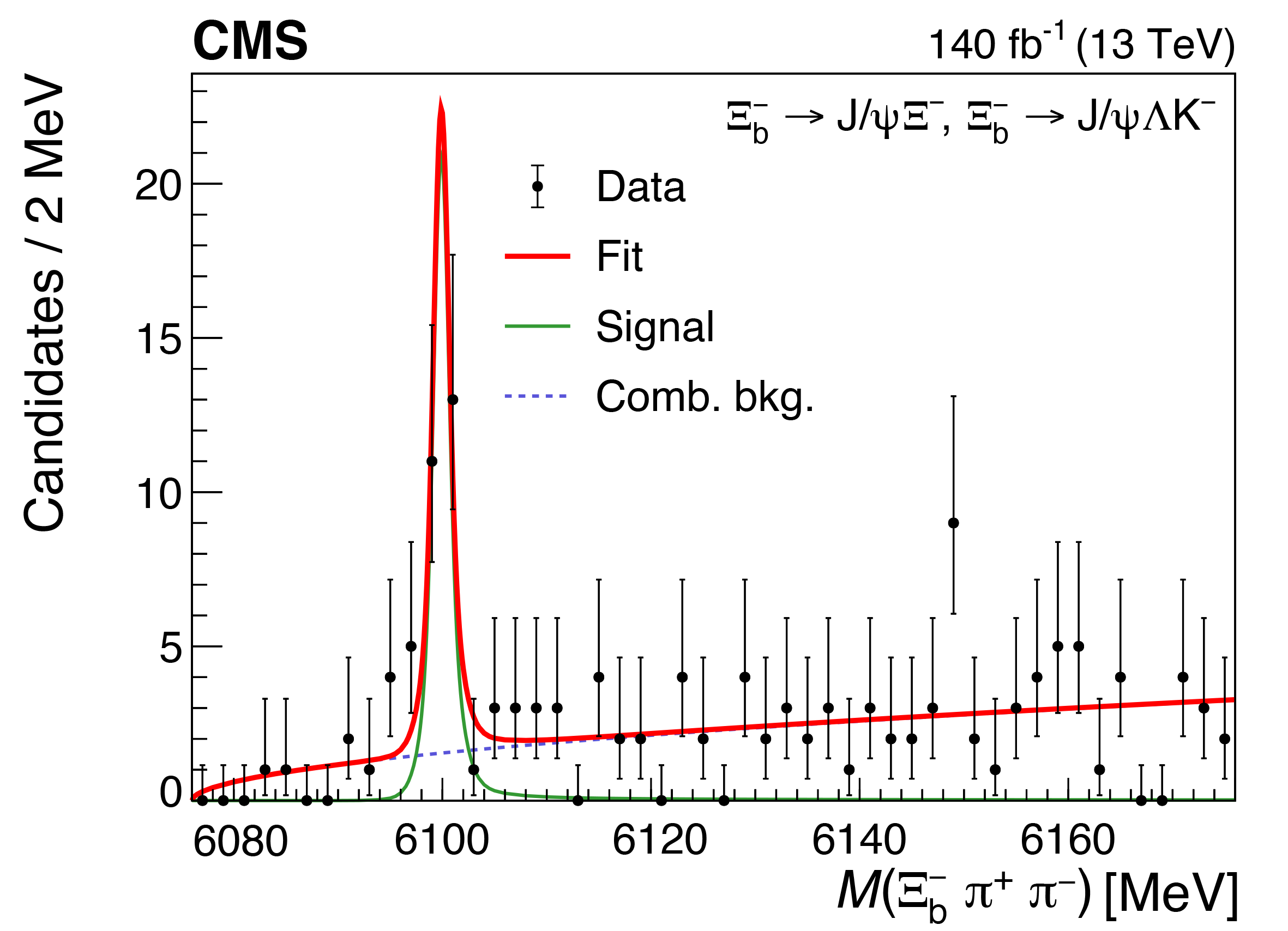 The strong force is responsible for the interaction between quarks and can be used to predict how baryons are formed. The new baryon provides an essential contribution to our understanding of the strong force. There are many different theoretical models and predictions, calculating the properties (mass, natural width, quantum numbers, decay modes etc.) of the excited Ξb states. Our observation could shed light on distinguishing between these models. That will improve our knowledge of spectroscopy and energy levels of hadrons.

The spectroscopy of hadrons containing b quarks in general, and the Ξb family especially, still hides many secrets. During the LHC Run 3, which is scheduled to start at the beginning of 2022, a new large statistics data sample will be collected.  Even ten times more data will be when the future High-Luminosity LHC begins in 2027. These future LHC runs will allow us to not only search for the new Ξb states and confirm those observed so far by the LHCb Collaboration, but also perform measurements of their properties, which is crucial for the identification of their place in the framework of the Constituent Quark Model.