A possible new decay mode of the Higgs boson 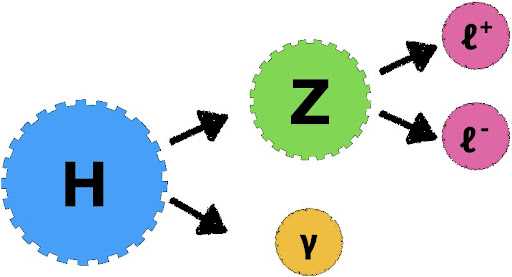 It has been almost a decade since the Higgs boson (H) was discovered by the LHC experiments, ATLAS and CMS. However, the enthusiasm to study this particle in detail is never ebbing. The H is being scrutinised vigourously in many more ways than the scientists initially thought would be possible. It is unique in its characteristics and plays crucial roles in the well-established theory of fundamental particles and their interactions, the standard model. Measuring the properties of the H precisely in experiments is a way to test this theory deeply and search for the anticipated new physics about which we do not have specific idea as yet.

Having a mass of about 125 GeV (1 GeV is roughly equivalent to the proton mass), the H can decay via multiple channels, with rates varying over several orders of magnitude. Though the decay products are quite often a pair of quark anti-quark (eg., H→bb), or a pair of weak bosons (eg., H→ZZ), there can be different combinations of particles as well, like, H → Z𝛾. This process falls into the category of relatively rare decay mode, since the probability of occurrence is quite low (less than 2 in a thousand) and it remains unobserved. However, it is no less interesting than the others. Note that the decay H → Z𝛾 proceeds in a more complicated way than, say, H → bb or H→ZZ, and the key lies here. The laws of quantum physics allow the H → Z𝛾 process to be affected more readily by the physics of beyond the standard model. This implies that the actual decay rate can potentially differ from the prediction of the standard model. An experimental measurement of the H → Z𝛾 process will definitely shed light on this. The CMS Collaboration recently embarked on such a task, and using the data collected from 2016 through 2018, interesting results have been found.

Like the H, the Z is also unstable and decays quickly to a pair of particle and anti-particle. For about 3.3% of the time, Z decays to an electron and a positron (Z→ e+e-) which is equal to the rate for Z   decay to a muon and an anti-muon (Z→ 𝝁+ 𝝁-) as well. Figure 1 displays the computer reconstruction of such a signal event consisting of a photon and a pair of muons of opposite electric charges. 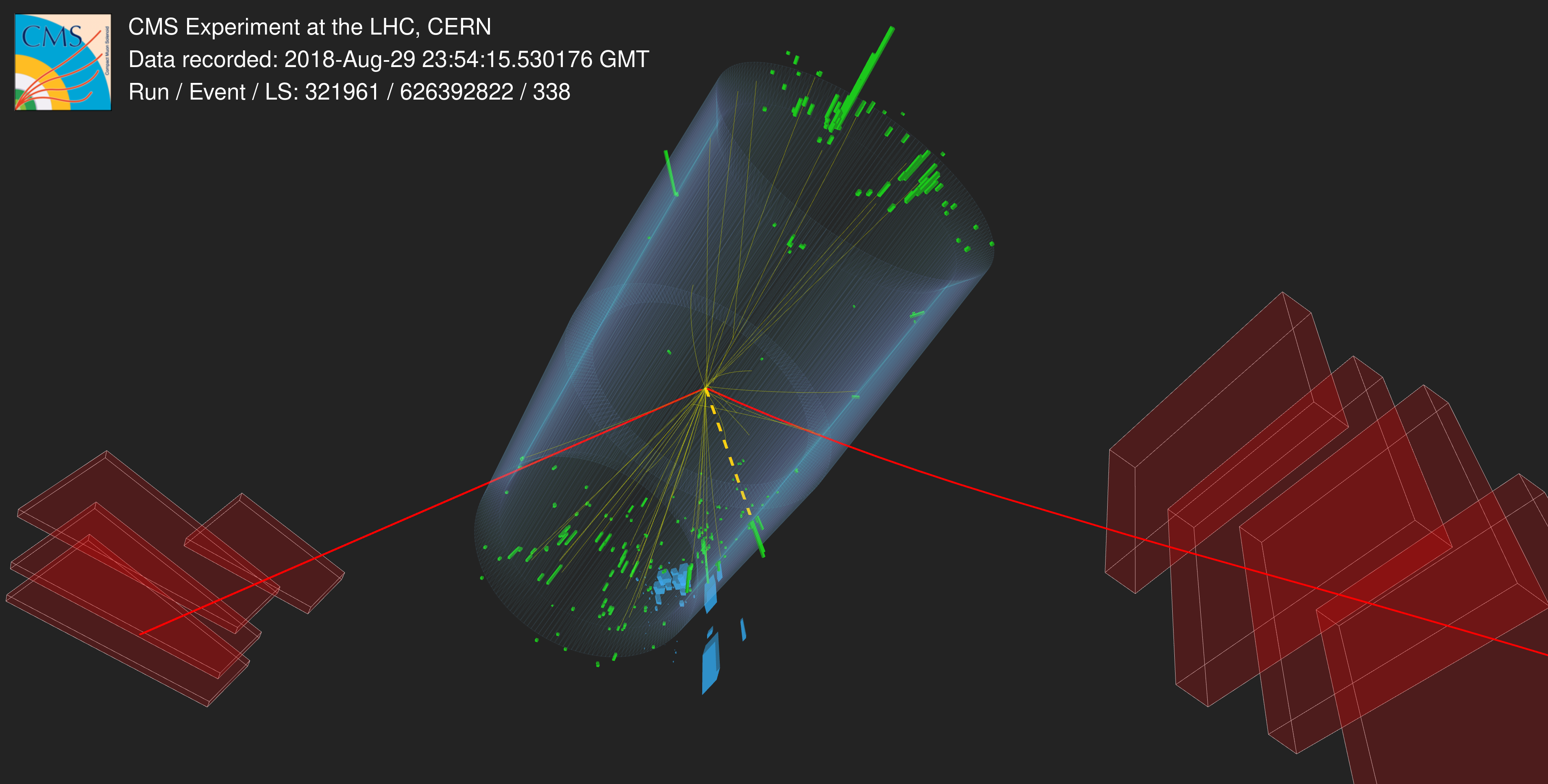 Figure 1: A proton-proton collision event recorded by the CMS detector in 2018 at a centre of mass energy of 13 TeV. The event possibly indicates the decay of a Higgs boson to a Z boson and a photon, where the Z  decays into a muon and an anti-muon (red lines) which extend all the way to the trapezoidal muon detection system. An energy deposit in the electromagnetic calorimeter (represented by the green boxes) with no associated track is indicative of a photon (orange dashed line) 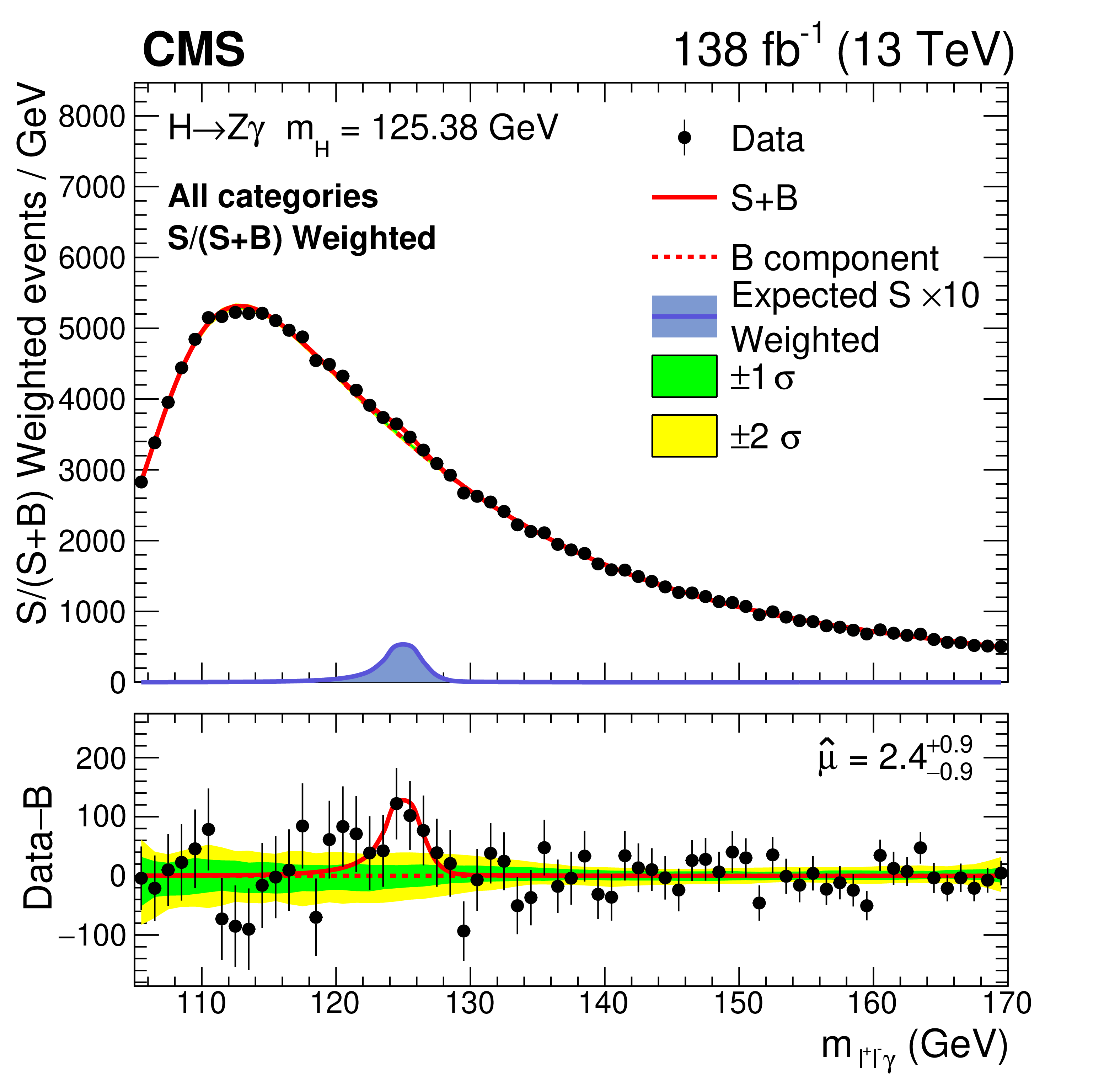 Figure 2: The combined mass of the system of three particles (e+ , e- and 𝛾) studied by CMS scientists to assert the presence of events corresponding to Higgs bosons decaying to a Z boson and a photon in Run 2 data.  Black dots with error bars are collision data collected by the CMS detector, and the red dashed line is the estimate of the total expected background, while the continuous red line represents the sum of the expected signal and the background. The bottom panel shows the distribution of data minus the background. An excess of events is visible near the Higgs boson mass of 125 GeV.

A bulge, corresponding to some excess of events, near the Higgs boson mass was noticed, which became more evident when the expected total contribution of the background was subtracted from the data. This is displayed in the lower panel of Figure 2. The bulk of the background component was derived from the data itself. If one assumed no such decay of the H were present in the data, this bulge would occur due to a random chance about three times out of a thousand. This is pretty unlikely, but it isn’t enough to report evidence for the decay. With more collision data pouring in soon, this threshold may be surpassed. At that point, we will be able to better understand whether the decay probability of the Higgs boson to a Z boson and a photon agrees with the prediction from the standard model, or whether it provides any hints of new physics. Keep track of what is happening in the CMS experiment!