Probing the Standard Model with a boson-boson collider 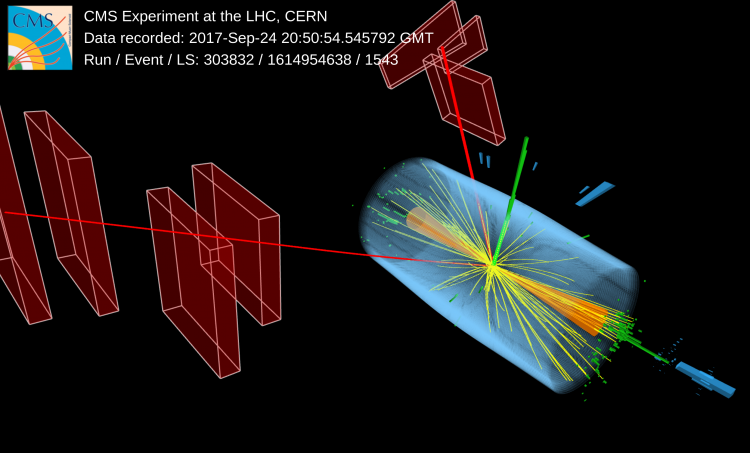 To investigate when the Standard Model will start breaking down, the CMS Experiment looks at extremely rare collisions where the Large Hadron Collider is working as a boson-boson collider. This can teach us more about the nature of the Higgs boson and the possibility of new particles and forces at energies beyond those directly reachable by the LHC.

The weak force is one of the four fundamental interactions between elementary particles, along with the electromagnetic, strong, and gravitational forces, and is responsible for the radioactive decay. The weak force carriers are the heavy W+, W- and Z bosons, about 80 to 90 times heavier than the proton; first discovered with the Super Proton Synchroton accelerator at CERN in 1983. The Standard Model of particle physics predicts self-interactions between these massive bosons, meaning that the heavy W and Z bosons can directly produce other W and Z bosons and vice versa if enough energy is available. Studies of the behaviour of these self-interactions, also known as triple- and quartic-gauge-couplings, provide crucial insight into the structure of the Standard Model. These studies can reveal hints of contributions from yet unknown physics as undiscovered particles and forces can change the way the W+, W- and Z bosons are produced.

One obvious way to study this would be to build a massive W and Z boson collider in the tunnel of the Large Hadron Collider at CERN and then examine their self-interactions. At first glance, this is impossible as the W and Z bosons have extremely short lifetimes and travel only distances of about 0.1 x 10-15 meters before decaying to other particles and cannot be used as targets or projectiles. Or can they? During rare occasions, a W or Z boson is created inside a proton, and even more rarely this happens inside two colliding protons at the LHC resulting in unlikely collisions of two bosons as illustrated with a so-called Feynman diagram in Figure 1. There are approximately 1 billion proton-proton collisions per second at the LHC, and these extremely rare vector boson scattering (VBS) events are only recorded once every 1000 billion proton-proton collisions. Figure 1: An example Feynman diagram: two quarks from the incoming protons come from the left and produce two W bosons that self-interact in the centre (the so-called quartic-gauge-vertex). The outgoing W bosons decay into a charged lepton (electron or muon) and the corresponding neutrino. The charged leptons are visible by the CMS experiment. On the right, there are also two quarks remaining that tend to point along the direction of the LHC beam, which could be visible as jets of particles pointing along the direction of the LHC beam pipe in the CMS experiment.

The discovery of a Higgs boson by both the ATLAS and CMS experiments in 2012 confirmed the electroweak symmetry breaking mechanism, the process through which elementary particles, including the W and Z bosons, gain mass via interaction with the Brout-Englert-Higgs field.  In fact, the LHC was built with a guaranteed discovery: we would either find a Higgs boson or discover new physics in VBS at high energies. This is because if we calculate the number of the triple-gauge-boson and quartic-gauge-boson interactions, the theory runs into trouble at high energies predicting probabilities of collisions larger than 1. Effectively this would mean that more of these kinds of collisions would be produced than all the collisions of the LHC together, which is of course impossible. Only after the inclusion of the Higgs boson in the Standard Model, the predictions make sense. The VBS process provides a treasure trove of information on the massive boson self-interactions as well as the principles of the physics behind the Higgs boson.

Using the data collected during 2016-18 CMS has performed detailed studies of the production of the same-charge WW, and WZ boson pairs using the leptonic decays (electrons and muons). The VBS final states at the LHC have a striking signature with two jets (originating from the two initial quarks that initially radiated the W or Z bosons) in the opposite hemispheres of the CMS detector close to the LHC beamline and with a large invariant mass mjj. The WW and WZ production modes are studied together by simultaneously measuring them using several kinematic observables.

The CMS collaboration reported the first observation of the electroweak WW production at 13 TeV with significance greater than five standard deviations using the data collected in 2016. Results close to 5.0 standard deviations indicate about a one in a million chance of the result arising from a statistical fluctuation. First detailed studies of the WW production as functions of different kinematic variables are performed with this larger dataset. An excellent agreement with the predictions of the Standard Model can be seen in Figure 2.

To establish the first observation of the electroweak production of the WZ boson pairs with the CMS detector, information like the mjj distribution shown in Figures 2 and 3 is used. The kinematic information of the WZ candidate events is combined with machine learning techniques to optimally isolate the WZ boson pairs.  The observed statistical significance is 6.8 standard deviations, well compatible with the expected excess of 5.3 standard deviations expected from the Standard Model predictions. Strong constraints on anomalous quartic-gauge-couplings are also set using the WW and WZ final states. Figure 2: Distribution of mjj in the WW analysis. The bottom panel shows the ratio of the number of events observed in data to that of the total Standard Model prediction. The grey bands represent the uncertainties from the predicted yields.

Figure 3: Distribution of mjj in the WZ analysis. The bottom panel shows the ratio of the number of events observed in data to that of the total Standard Model prediction. The grey bands represent the uncertainties from the predicted yields.

The observations of the electroweak production of WW and WZ boson pairs are essential milestones towards precision tests of VBS at the LHC, and there is much more to be learned from the LHC Run 3 data. Models of physics beyond the Standard Model predict enhancements to VBS via modifications to the Higgs sector, or from the presence of additional resonances. The High Luminosity LHC will start operation in the middle 2020s and should allow very precise investigations of VBS with high sensitivity to the electroweak symmetry breaking mechanism.