Resistive Plate Chambers are getting dolled up 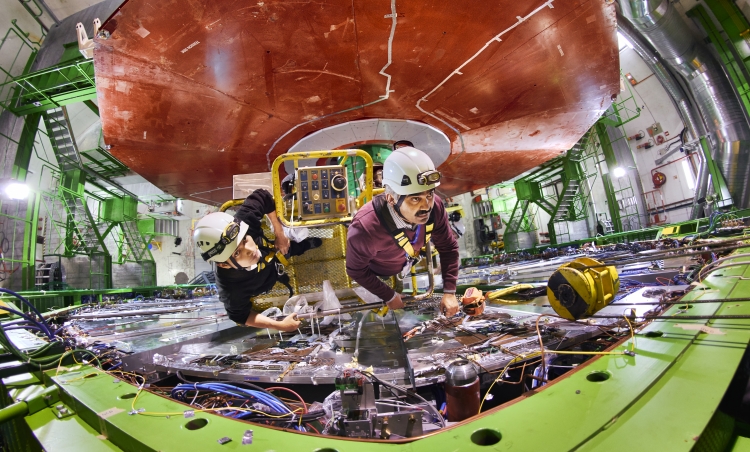 After the LHC was shut down in December 2018 following the successful completion of RUN 2 operation, CMS is undergoing an intensive upgrade and maintenance program during the current two-year break (“Long Shutdown 2” or LS2) in order to ensure an excellent performance of the detector in the subsequent physics program.

As the name “Compact Muon Solenoid” suggests, detecting muons is one of CMS’s most important tasks. Muons are charged particles, a heavier version of electrons. They can be produced as decay products of a number of interesting particles; for instance, one of the clearest signatures of the Higgs boson is its decay into four muons. Resistive Plate Chambers (RPC) are fast gaseous muon detectors that provide a muon trigger system. RPCs complement other muon detection technologies namely Drift Tubes (DT), Cathode Strip Chambers (CSC) and Gas Electron Multipliers (GEM). These four systems comprise the CMS Muon detector, a robust, redundant and efficient muon spectrometer. There are 1020 RPC detectors installed extended over almost the whole CMS coverage with more than 100,000 separate readout channels.

The CMS RPC group has planned an intensive campaign of maintenance of existing detectors and electronics and to install the services for the future improved technology RPC detectors which are to be installed in the coming years. One of the key interventions during LS2 is to dismount 36 super modules in each of the two RE4 stations (in the external disks of CMS or “endcaps”) for maintenance and to create the space for partner muon detectors (CSC) extraction for their electronics upgrade. The first intervention on this campaign was done from the 12th to 22nd of March 2019. Thirty six super modules  from RE+4 station were successfully dismounted by a team composed of Pakistani, Italian, Colombian, Belgian, Brazilian, Mexican and CERN CMS members. The extraction of RE4 super modules of about 4 meters long and weight of 230 kg each was challenging. This was the very first extraction of this type of modules as the 4th Endcap station was installed during LS1 and none of the SM has ever been extracted.

In the coming months, detector experts will work hard to consolidate the RPC detector for future operations. All the repaired components will be installed, commissioned and tested in order to prepare the detector for excellent data delivery once the LHC resumes operation in 2021.