The biggest achievement of the LHC so far has been the observation of a Higgs boson in 2012. This is an outstanding confirmation of what today is the established theory that describes the fundamental interactions of particles, known as the standard model of particle physics. Since then, particle physicists have put incredible efforts into pushing the predictions of the standard model as far as possible, searching for extremely rare processes that could shed light on currently unexplained phenomena. Direct searches for new heavy particles (which could explain the origin of dark matter for instance) are currently limited by the energy that can be reached at the LHC, around the TeV scale. Such new particles may, however, indirectly modify standard model processes even when they are too heavy to be directly produced.

Processes in which W or Z bosons are emitted from the constituent quarks of the incoming protons and subsequently scatter off each other are called vector boson scattering or, VBS, in short. A cartoon for a VBS process is depicted in Figure 1. They can be used to investigate interesting characteristics of the standard model as well as to look for potential effects due to new physics. The Higgs boson itself is responsible for preventing the probability of such processes from growing indefinitely as a function of the scattering energy. For this reason, VBS processes can play a key role in studying the Higgs sector. 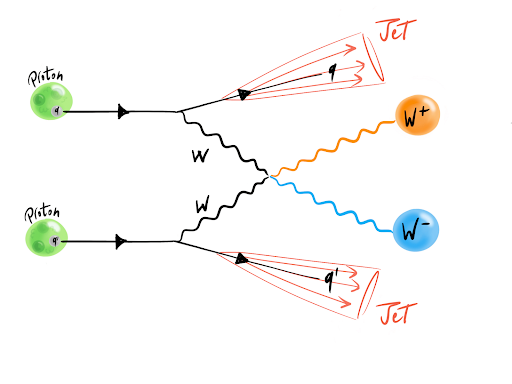 Figure 1: A cartoon of the vector boson scattering (VBS) process. Two oppositely-charged W bosons emitted simultaneously from the incoming quarks in a proton-proton collision get scattered. The scattering also involves the production of two jets emitted in opposite directions and close to the beam axis.

VBS processes have a distinctive topology that can be exploited to identify them. The outgoing quarks create two collimated showers of particles - the jets - which are well-separated and typically emitted close to the beam axis. Furthermore, the vector bosons can be identified using their decays via an electron or a muon, which can be quite easily identified and measured with good precision in the detector. Additionally, there are two neutrinos which escape detection and can be inferred via the imbalance when the energy conservation law is applied.

The probability of the scattering of W and Z bosons is estimated to be very small in the standard model, so large data samples must be collected by the experiment. The first VBS process was observed by the CMS Collaboration in 2018 by looking for the production of two W bosons having the same electric charge. This signature has less background events (events originating from other processes that mimic the signal) than the mode where the W bosons have opposite electric charges. The CMS Collaboration has recently completed the study of VBS process with oppositely charged W bosons using the complete data set from Run 2 operation and employing machine learning techniques. Figure 2 shows the output distribution of the deep neural network (DNN) that has been used to separate the signal from the background processes. The signal significance improves dramatically with increasing discriminator value. The data confirm that background events alone cannot explain the observed distribution. This has allowed physicists to claim the first observation of W boson pair production with a significance of 5.6 standard deviations with respect to the background-only hypothesis. In other words, if the VBS process did not exist, the probability to observe a signal as large as what has been measured is lower than 1 in 10 million! 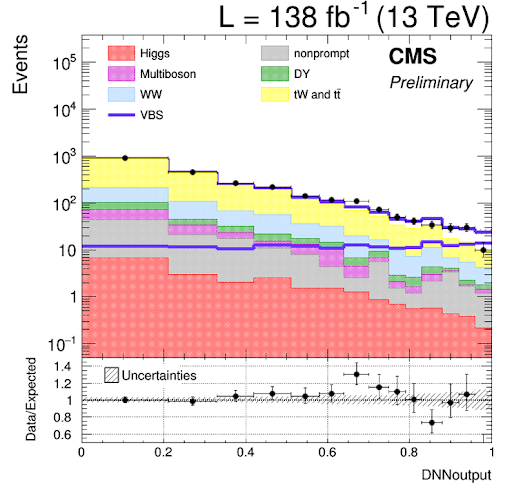 Figure 2: Distribution of the deep neural network output or the discriminator score (DNNoutput) in data and simulation corresponding to data collected in Run 2. Data are indicated by black circles with error bars. The expected contributions from various background processes are shown as filled histograms stacked on top of each other and are mostly found at low discriminator values. The standard model expectation from the vector boson scattering signal is superimposed (violet line labeled “VBS”) and indicates that the signal-to-background ratio increases with the score. The bottom panel shows the ratio between observed data and expected values, and the dashed gray band represents the uncertainty.

With the ever-increasing amount of data delivered by the LHC, many signatures of VBS are becoming more easily observable. Thus the path towards precise measurements in the VBS sector has just begun, and an exciting new era of exploration is ahead of us.