Searching for a hidden signal 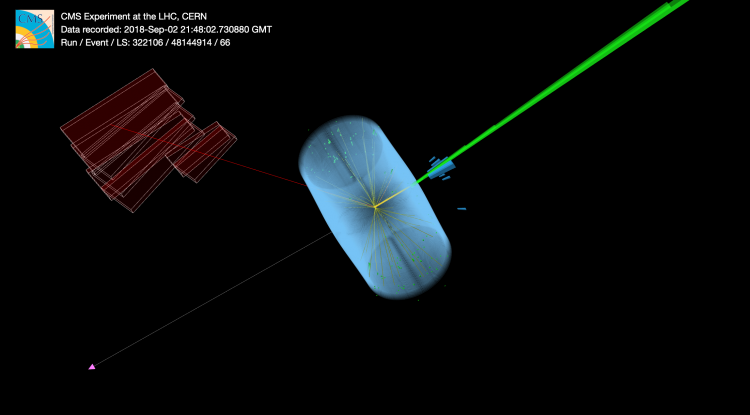 The CMS Collaboration has released the results of a new analysis that looks for the subtle influence of “new physics” in the production of a W boson and photon pair.

At the CMS experiment, we look for evidence of this new physics.  The most striking and unambiguous signal would be the production of new heavy particles that do not exist in the standard model, though, to date, no such signals have been observed. There is, however, the possibility that the new physics is more subtle, causing only small discrepancies in the properties of well-established processes. We call this an interference effect. It is like standing on the shore looking out to sea. On a foggy day, it is impossible to see a faraway ship, but the waves it causes may eventually reach us, and the size of these ripples tells us something about the distant object that caused them.

CMS has performed a new analysis that looks for such an effect. We study the production of a pair of bosons – a W boson, a heavy mediator of the weak force, and a photon (γ), the massless mediator of the electromagnetic force. The W boson is unstable and decays to lighter particles. In this analysis, we look for the decay into an electron or muon plus an invisible neutrino. The electrons, muons and photons can all be clearly identified in the CMS detector, while we can infer the presence of the neutrino as an imbalance in the total particle momentum perpendicular to the beam direction.

The basic idea of the analysis is simple: we can count how often a Wγ pair is produced, as a function of the energy of the photon, and compare what we observe in our data to what is predicted for different values of C3W. But it turns out there is a problem. The quantum mechanical properties (related to the spin) of the particles produced in the standard model are different from those that would be produced via new physics. This heavily suppresses the interference effect, leaving our analysis with very little sensitivity.

However, in recent years theoretical physicists have demonstrated that the interference effect is not destroyed, it is just hidden. While it cannot be observed in the particle energy spectrum alone, if we make a careful measurement of the angles at which the particles emerge from the collision, the interference can be restored. The special angle we measure is called φ (“phi”). In the standard model alone, our data should look flat as a function of φ, but the interference should cause a striking sinusoidal, or wave-like, modulation.

So now we have the ingredients we need. We make a two-dimensional measurement of the photon transverse energy and the angle φ, where we should see the modulation in φ grow in amplitude as the energy increases.

Figure 1: This animation shows that as C3W increases, the effect on the one-dimensional photon energy distribution is negligible. However, if we look in two dimensions, including the special angle φ, we see a striking wave-like modulation.

This new approach has been applied to LHC data collected by CMS between 2016-2018. What we observe turns out to be fully consistent with the expectation in the standard model. While it is always a little disappointing not to see evidence of new physics, this analysis has demonstrated that this new two-dimensional method can improve our sensitivity to the interference by a factor of nearly ten. This technique will prove even more valuable when applied to the much larger datasets the LHC will deliver in the years to come.