Sensing the invisible Higgs at the LHC 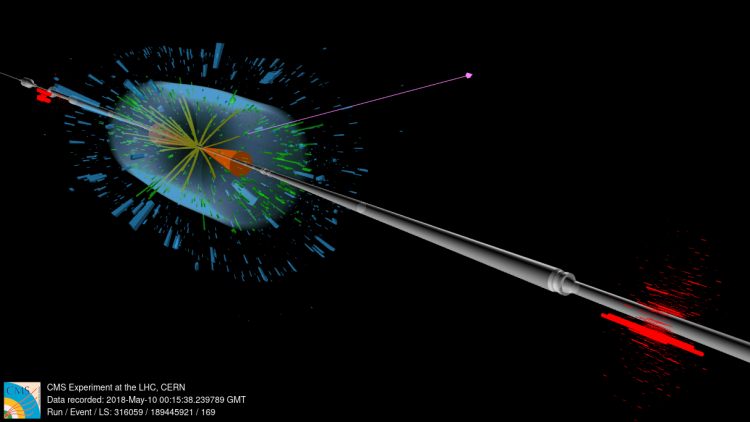 One of the fundamental puzzles we face today is the dark matter (the dunkle materie, as called by the Swiss physicist Fritz Zwicky back in 1933) in the universe. It is highly abundant (almost five times more than all the objects put together in the universe which we can detect: the stars, the galaxies, you name it), but something invisible to us. While we are not sure about its nature, many physicists believe that the dark matter is made up of some new massive fundamental particle, which we are yet to discover. Now it is the Higgs boson which is responsible for the masses of all the fundamental particles in the standard model; particle that the Higgs boson interacts with stronger gets higher mass. So, if the dark matter particle interacts with the Higgs boson and gets its mass thereby, we have a new and exciting way to look for it in the LHC experiments. The detectors are capable of searching for the "invisible" decay of the Higgs boson into a pair of dark matter particles – the decay one can’t “observe” like the way others are detected in the experiment. No wonder the "invisible" decay of the Higgs boson is being searched by the LHC experiments since the time it was discovered in 2012!

So, how do you find the invisible decay of the Higgs boson at the LHC? Don’t worry, there is a way! The usual method of sensing a particle in an experiment is to make it interact with the detector, but the dark matter particles would elude the detection, as otherwise we would have seen them via their interactions with the usual matter around us. Nevertheless, a dark matter particle produced in the decay of a Higgs boson would carry away considerable amount of energy and momentum. Hence, if we consider the momentum conservation rule, we would find some imbalance, for example, in a direction transverse to the proton beams. This, something amiss in the detector, then, would be interpreted as a signature of the dark matter production.

The only standard model particles that are also "invisible" in our complex LHC detectors are the neutrinos since they hardly interact to produce any experimental signal. Similar would be the situation with the dark matter. However, neutrinos cannot be the dark matter particles as they are simply too light to account for the amount of total "invisible" mass needed in the universe to explain the astrophysical observations! According to the standard model, the Higgs boson almost never decays into neutrinos; in fact such a decay could only occur once in thousand other decays. Thus, if we happen to measure that a significant fraction of the Higgs bosons produced in the experiment decays invisibly, it would certainly mark the discovery of a new particle, perhaps the missing dark matter one! 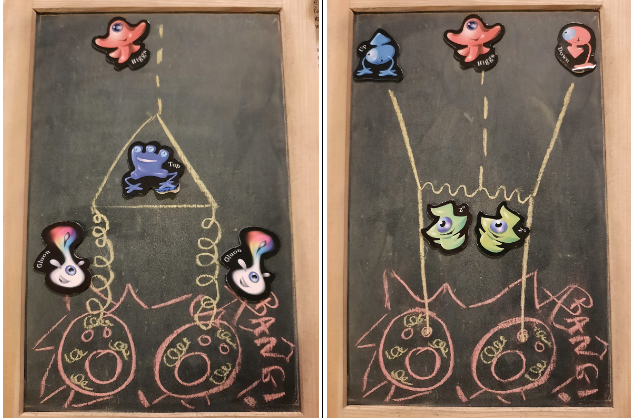 Figure 1: Cartoons for the dominant ways of Higgs boson production (dashed lines) at the LHC, by banging 2 protons: via gluon fusion (left) denoted by springy lines or vector boson fusion (right), denoted by wiggly lines and emitted from the incoming quarks, which would finally produce jets or shower of particles.

Fortunately enough, for about 7% of the time the Higgs boson is produced along with 2 jets (showers of particles originating from the quarks), with a particular topology, as shown in the cartoon on the right of Figure 1. The jets are typically positioned in the forward-backward regions of an almost hermetic detector and carry a lot of energy such that the jet pair system mass is high. Further, the region between the jets will be devoid of energetic particles, since the Higgs boson has decayed “invisibly”! Such special features of the "signal"  provides a convenient way to look for the "invisible" decay of the Higgs boson. Figure 2 displays one such reconstructed event in the CMS experiment, which satisfies the criteria of an "invisible" Higgs boson produced via vector boson fusion process.

Figure 2: Interactive display ((try zooming/rotating) of a candidate event for production of a Higgs boson in vector boson fusion process and decaying invisibly. The hypothesis is supported by the signature of a pair of jets positioned in the forward and backward parts of the calorimeter indicated by yellow blocks and the system having high mass. The transverse component of the missing energy, indicated by a red arrow, flows in the central region of the detector. Alternatively, you may view the interactive event display on this separate page.

Unfortunately, several processes with much larger abundance at the LHC actually contribute to creating the same topology as that of the signal discussed above. We call them backgrounds. Then the whole game reduces to rejecting those backgrounds maximally whilst keeping as much signal as possible, an extremely challenging task. The feat has been well-achieved by carefully studying the characteristics of various types of expected backgrounds vis-a-vis the signal. From this exercise the behaviour of the signal-like backgrounds could be anticipated well.

The physicists in the CMS collaboration considered recently the complete data collected during the Run 2 operations of the LHC and extensively searched for presence of events corresponding to invisibly decaying Higgs boson. However there was no hint for the presence of any signal, only the known stuff, the backgrounds of the expected amounts! Too bad, indeed.

The negative result, however, is very important for our efforts in understanding the properties of the Higgs boson. It showed that the Higgs boson cannot decay invisibly more often than in 18% of the cases. This number is actually quite large, when compared to the decay into, say a pair of photons which is easy to identify in the experiment, but occurs only about twice in thousand decays. The LHC experiments are looking forward eagerly to having more data to see if Nature does allow such "invisible" decays of the Higgs boson, but are simply more rare. Not the least at all, such results from the LHC are actually interpreted in terms of interaction probability of dark matter with ordinary matter. This depends on the mass of the dark matter particle and thus absence of "invisible" decay of the Higgs boson rules out the existence of such particles in a complementary way to the dedicated searches for dark matter in non-accelerator experiments.