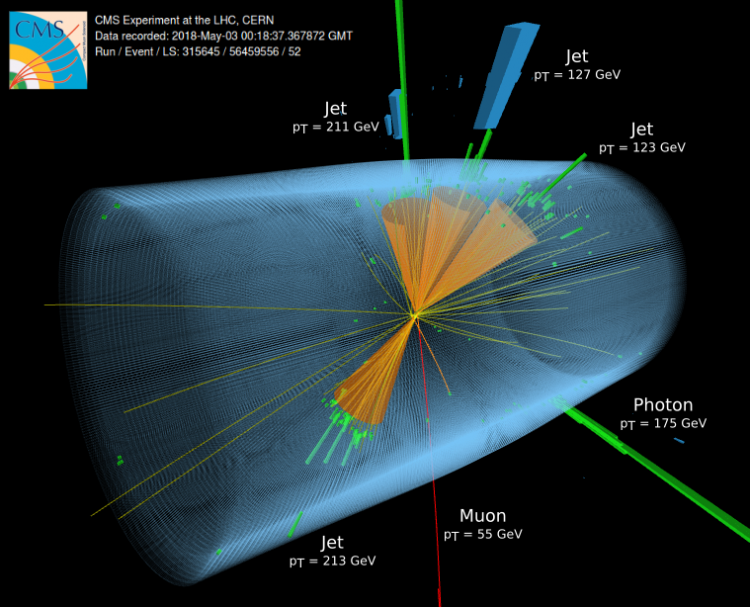 A candidate event with two top quarks and a photon. One of the top quarks is decaying into the three jets shown as orange cones at the top of the image. The other top quark decays into a bottom quark jet (the orange cone at the bottom), a muon (the red line), and an undetected neutrino (not shown). The photon is shown as a green cluster of calorimetry deposits to the right. The yellow tracks are charged low-energy remnants of the proton-proton collision.

Electromagnetic interactions govern everyday life: You see an object when particles of light deposit energy on the retinas in your eyes. Our sense of touch results from the exchange of the same particles, the photons, between the atoms in our skin and the objects we touch. A unified understanding of these seemingly unrelated phenomena accounts for the fascination with physics.

The same is true for photon interactions in the realm of particle physics. The theory describing particles’ interactions via the fundamental forces, including the electromagnetic interaction, is known as the standard model of particle physics. The most massive particle in the standard model, by far, is the top quark, and measurements of its properties test important predictions. At about 170 times the proton’s mass, it takes enormous kinetic energy to produce top quarks in collisions. The Large Hadron Collider at CERN is nowadays the only place to study top quark properties, and the CMS detector can record the signals of the top quarks’ decay products. Among the more than 100 million collision events that produced top-quark pairs from 2016 to 2018, the new result focuses on a tiny fraction: the one in 3000 collisions where we find a photon and top quarks at the same time. We probe the top quark’s electromagnetic interaction in that case: it shines highly energetic photons at the detector, and this allows physicists to ‘see’ the top quark in a different light.

At 10 billion times the energy of visible light, such photons cannot be seen directly. Instead, the CMS electromagnetic calorimeter indirectly provides eyesight. When photons impact the detector material, their energy showers into large numbers of electrons and more photons. The CMS electromagnetic calorimeter, located inside the large CMS solenoid magnet, uses crystals to record these showers. It measures the energy and individually identifies the incident particles. The main active elements are 75848 scintillating crystals made of lead tungstate, which is heavier than iron but transparent as glass. The crystals are arranged in a barrel section and two endcaps, thus allowing accurate measurements of the photon’s energy. 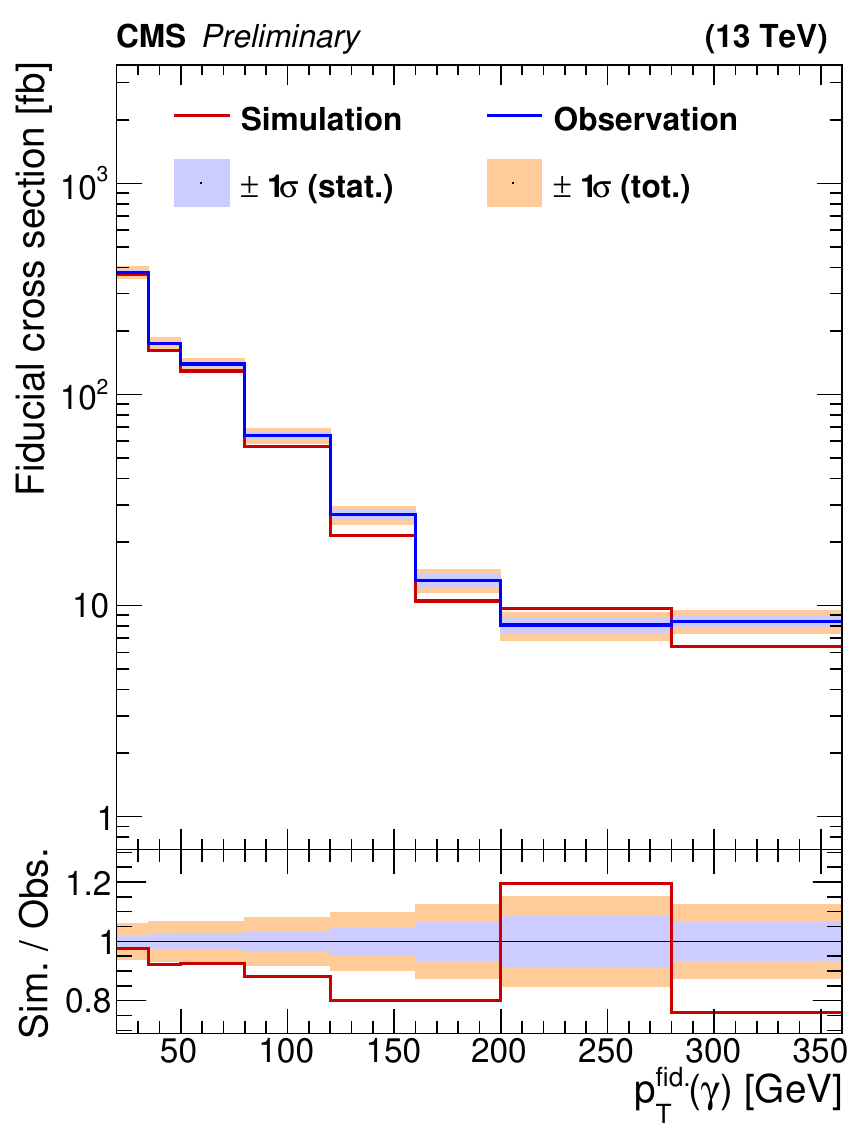 Figure 1: The blue line shows the observed photon momentum spectrum. The colored areas show the uncertainty in the measurement. The red line shows a simulated prediction.

The energy spectrum of the light an object emits determines the color we perceive. In the new result, the first CMS measurement of a photon spectrum emitted from top quarks is presented, and the spectrum is shown in Figure 1. The measured cross section (shown on the y-axis in the unit that cross sections are measured in, called femtobarn, fb) informs us about the production probability for the photon momentum shown on the x-axis. 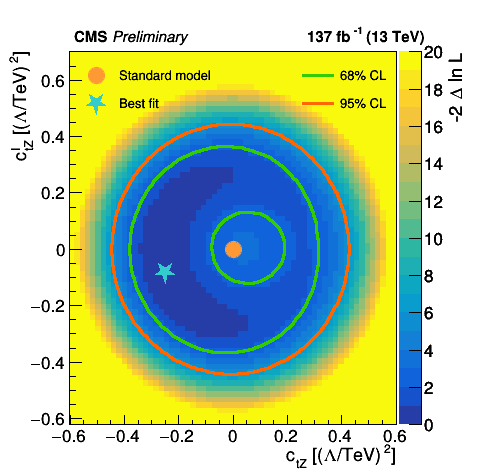 Figure 2: A measure of the top quarks’ magnetic (electric) dipole moment is shown along the x-axis (y-axis). The color code measures the consistency with the observed value, with blue being the most consistent. Small negative values of both dipole moments have the best compatibility with the experimental data, but the standard model value is still allowed.

And the result of the measurement? Figure 2 shows the magnetic (x-axis) and the electric (y-axis) dipole moment deviation from the standard model value indicated at the origin. We find the observation at small negative values for both moments, leading to a slight tension with the prediction. The top quarks’ energetic light is visible, but the “color” seems slightly stained. Whether it’s a real effect or a statistical fluctuation will be decided with more data. The rare events with the highest photon energies are essential for the measurement’s sensitivity. In 2022 the LHC Run 3 will start and will eventually double the available data. More data will allow us to shrink the uncertainties and decide whether the standard model passes this test.