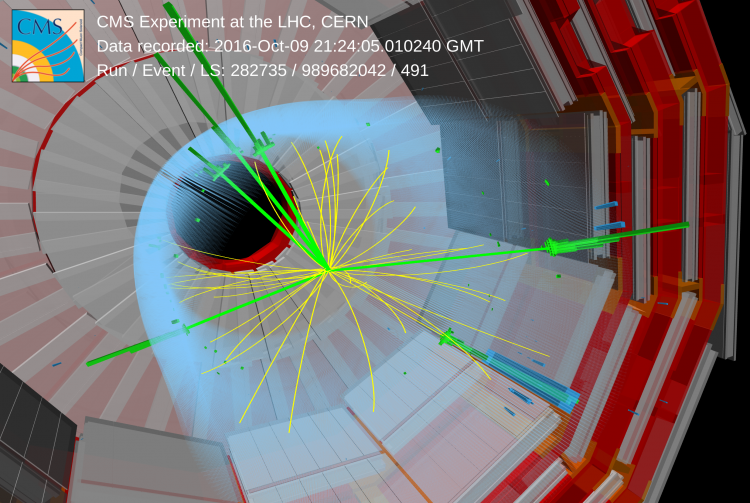 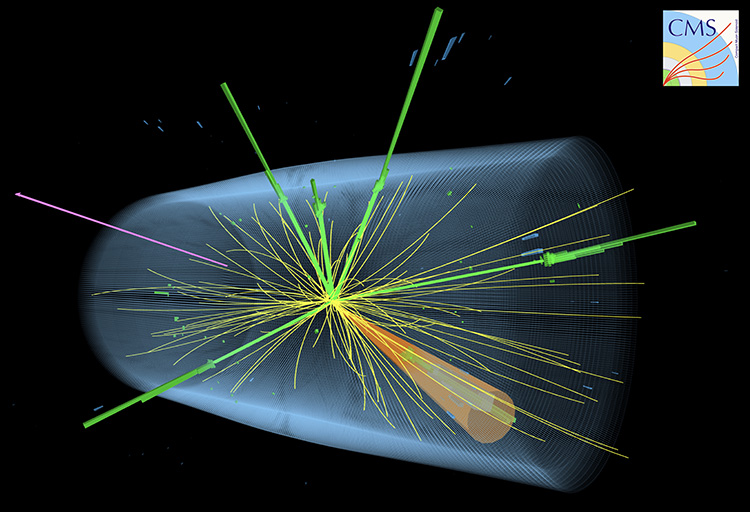 The CMS collaboration has released the first observation of the simultaneous production of three W or Z bosons in proton-proton collisions at the Large Hadron Collider (LHC). The result is based on the data collected by CMS during 2016–2018 at a collision energy of 13 TeV.

The Standard Model of the fundamental particles describes the W and Z bosons as the mediator particles of the weak force – one of the four known fundamental forces – which is responsible for the phenomenon of radioactivity as well as an essential ingredient to our Sun's thermonuclear process. It is possible for the W and Z bosons to self-interact, so W and Z bosons can create more W and Z bosons, which can manifest themselves as events with two or three massive bosons. Still, this creation is rare, so the more bosons, the less frequent they are produced. Processes with two massive bosons have been observed and measured to good precision at the LHC. 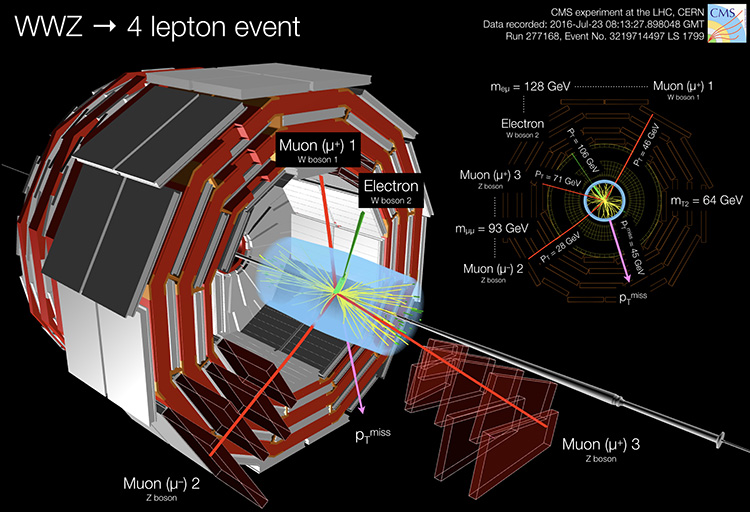 Figure: An event collected by the CMS experiment in 2016, where two W bosons and one Z boson were produced. One W boson decayed to a muon and its neutrino, the other to an electron and its neutrino. Neutrinos cannot be detected by the CMS experiment so are inferred from the missing transverse momentum pTmiss. The Z boson decayed to two oppositely charged muons.

The phenomenon of three massive bosons appearing in the same event is 50 times rarer than the production of the Higgs boson, which was observed at CERN in 2012. Since weak bosons are highly unstable, they almost immediately decay to electrons, muons, taus, neutrinos or quarks – the latter forming sprays of particles, called "jets". Besides neutrinos, all of these particles can be observed with the CMS detector, a highly sophisticated "camera" capturing snapshots of the proton-proton collisions at the LHC, but not necessarily at 100% efficiency.

The easiest way to identify the W and Z boson is when they decay to electrons or muons. With three bosons, we expect up to six electrons or muons, something that is extremely unlikely to happen at the LHC. Since in that case only some W and Z boson decay modes can be used, only a fraction of the events containing the massive bosons can eventually be studied in the detector, making the observation even more challenging.  Moreover, other events produced in proton-proton collisions tend to mimic the three massive bosons signature, making it a difficult task to tell them apart. Machine learning algorithms are deployed in the analysis to improve the performance of the lepton efficiency, and to distinguish actual tri-boson events from the background.

After the analysis a sample of tri-boson events was isolated with a significance of 5.7 standard deviations, meaning that the chance that this observation is not real is about one in eight million. This is the first observation of heavy tri-boson production at the LHC, well above the well-established 5-sigma threshold that particle physicists use to claim a discovery. The measured number of the collisions consistent with three W or Z bosons agrees with the predictions of the Standard Model, the best current understanding of fundamental particles and their interactions.

The observation of these extremely infrequent tri-boson events is the first step towards confirming the existence of the quartic self-interaction between the massive electroweak bosons. The result also opens up a new window to look for possible deviations from the predictions of the Standard Model, which may direct us to where to search for the existence of new particles, for example, additional Higgs bosons carrying an electric charge different than that predicted by the Standard Model.

This first look at this rare process is only the start, and in future runs of the LHC and High-luminosity LHC will provide the data to further study the interactions between the bosons, and eventually get a more in-depth probe into establishing the underlying structure of the Standard Model.