Twice the Higgs, twice the fun!

Figure 1: A candidate event for Higgs pair production via a transient, heavy, new particle reconstructed in the CMS detector. The red lines correspond to muons, and the pink line represents the direction of the missing momentum in the plane transverse to the beam direction. These could come from the decay of a Higgs boson to either a W boson pair or a tau lepton pair. The two b-jets, represented by orange cones, could correspond to the decay of one Higgs boson to two bottom quarks.

The Higgs boson, once the sought-after holy grail of particle physics, has now been with us for almost a decade.  By now physicists are able to use the Higgs boson itself as a tool for the next discovery beyond the standard model.  Interestingly, not one, but two Higgs bosons produced with certain properties could be a clear signal of a new process, a new symmetry, or even additional, incredibly small space-time dimensions curled up around every point in our normal three-dimensional world! As a manifestation, there would be an exotic, reasonably heavy particle or resonance that decays into a pair of Higgs bosons, and its mass would tell us the size of the extra dimensions! If such a resonance ever existed in the universe, during any time of its evolution, then the LHC has currently the best chance of producing them in the laboratory.

Scientists in the CMS collaboration looked for such a possibility. In the decay chain, one of the Higgs bosons (through the intermediate decay into two W bosons) decays to a pair of electrons or muons, also called leptons, while the other to a pair of b-quark initiated jets or b-jets. The CMS experiment has excellent capabilities of identifying and measuring the electron, muon as well as b-jets using machine learning algorithms. However, there are more prolific processes occurring at the LHC which mimic the signal of our interest; these are the backgrounds.

To discriminate the signal events from backgrounds two exclusive classes of events were studied, containing either one or two leptons, along with jets, etc. In the single-lepton event class, if there is a large radius high-energy jet close by, or even sometimes overlapping, advanced techniques are used to identify if it corresponds to Higgs decay via the W boson pair. Albeit, due to the escaping neutrino produced along with the leptons, there has to be a substantial amount of missing momentum because neutrinos pass through the CMS detector without leaving a signal. Displayed in Figure 1 is a candidate single-lepton signal event with a high energy muon and multiple jets recorded in the CMS detector.

In the dilepton event class, one Higgs boson decays to two W bosons or to two tau leptons which, in turn, decay to electrons or muons and also produce a significantly large amount of missing momentum in the event, due to multiple neutrinos. Figure 2 displays a potential signal event produced in collision data of 2018, with two high-energy muons that are positioned opposite to two b jets in the transverse plane.

Figure 2: An interactive display (try zooming/rotating) of a candidate event for Higgs pair production via a transient, heavy, new particle with a single lepton and jets reconstructed in the CMS detector. The orange cones are b-jets, the yellow cones are jets that are not from b quark decays, the long red line is a muon; the pink line shows the direction of the missing momentum in the plane transverse to the beam direction. The two b-jets potentially correspond to the decay of one Higgs boson to two bottom quarks. The two yellow jets could be from a W boson decaying to two non-bottom quarks, while the muon and an undetected neutrino could be from another W boson. These two W bosons could have come from the other Higgs boson candidate. Or view the interactive event display on this separate page.

In the analysis, evidence of a Higgs pair, produced from a new heavy particle, will show up as a bump in the mass distribution estimated from the combination of the decay products, termed mHH . This is exemplified in Figure 3 for two possible values of the mass (1 and 3 TeV, remember 1 TeV corresponds to thousand times that of a proton mass) of the resonance.  However, it is to be noted that since the mass of this particle is unknown, a wide range had to be searched, from about 6 to 30 times the mass of the Higgs boson, as shown in Figure 3. This distribution potentially could provide a tell-tale signature if there was a broad excess of events above the expected background. 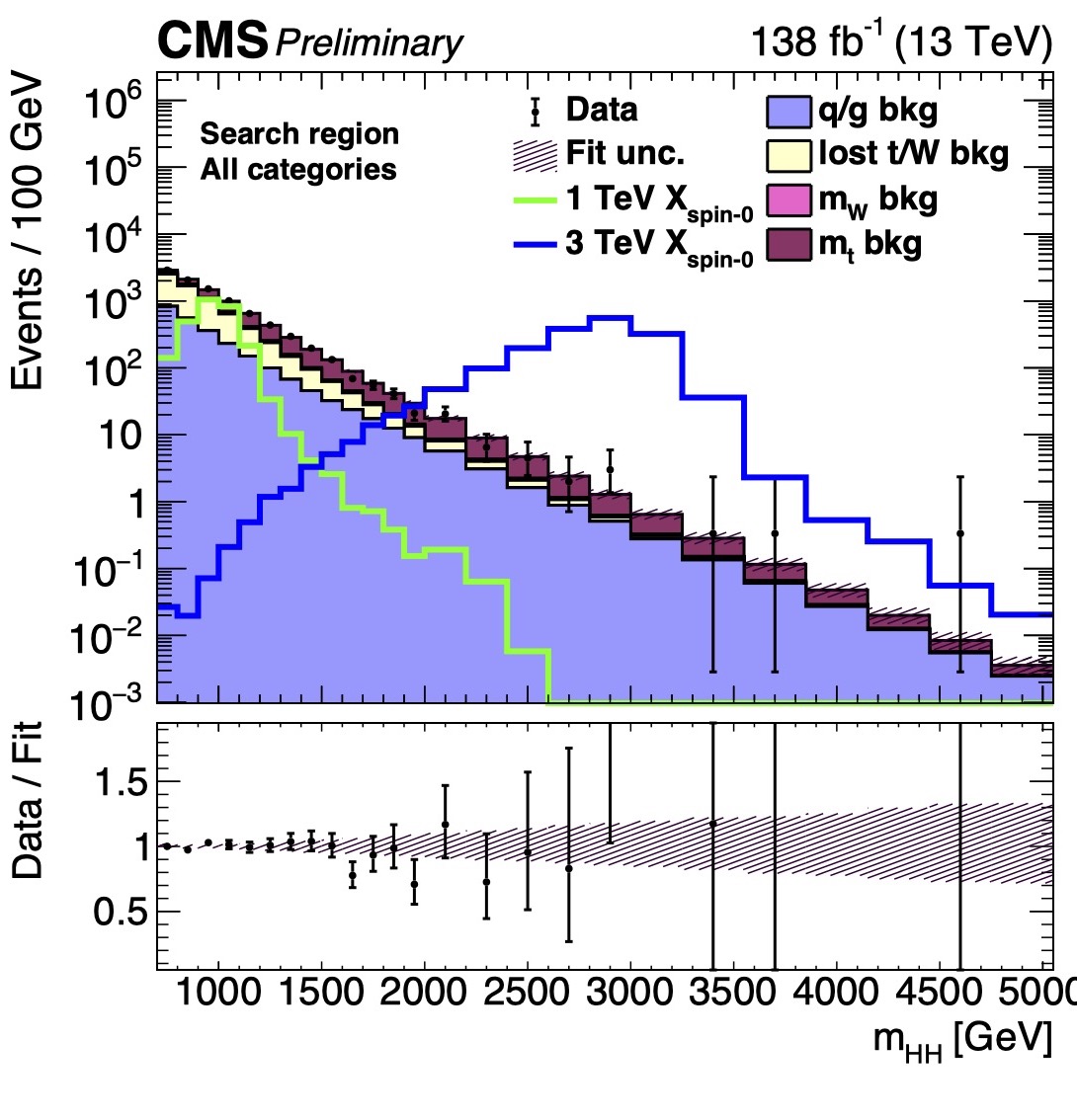 Figure 3: Estimated mass distribution for the Higgs pair mHH , studied to look for evidence for production and decay of a new, hypothetical, heavy particle. The data from the CMS detector are the black points with uncertainty bars, the coloured histograms are the backgrounds. The green and blue lines correspond to two hypotheses regarding the mass values of the exotic particle, 1 and 3 TeV.

Evidently, the experimental data agree well with the standard model expectations, and no significant excess of events is observed due to the possible production of an exotic particle predicted in models of extra space-time dimensions. Thus we can also constrain the possible sizes of extra dimensions. While indeed it is disappointing to observe no hint of such exotic phenomena yet, the tools and methods developed for this search will help to advance similar searches in the future. The CMS experiment is expected to collect almost 20 times more data in the future than it has already, and so there is definitely still hope that this and other similar searches will prove fruitful!