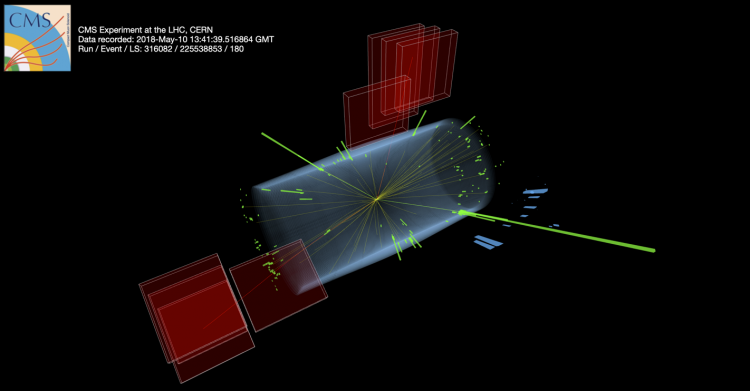 The standard model of particle physics is currently the best way to describe interactions of fundamental particles that make up our Universe. It has been tested over many decades and many experiments, and the standard model manages to predict everything accurately. On 4th July 2012, the standard model achieved another great victory when CMS and ATLAS experiments announced the discovery of a new particle. The newly discovered particle turned out to be the Higgs boson, an essential piece in the standard model puzzle that explains the origin of the mass.

When the Higgs boson is produced in high energy proton-proton collisions at the Large Hadron Collider, it decays almost immediately to other elementary particles. Because of this, we can't detect the Higgs boson directly in the CMS experiment, but instead, we have to study its decay products. Carefully measuring the energy and momentum of decaying particles we can rewind the collision and study the properties of the Higgs boson.

Figure 1: Interactive display (try zooming/rotating!) of an event recorded by the CMS detector in 2018 at a proton-proton centre of mass energy of 13 TeV. The event is a candidate for the production of a Higgs boson which decays into a pair of Z bosons. One Z decays to a muon-antimuon pair (red lines) and the other decays to an electron-positron pair (green lines). You can also check out this display on a separate page.

Production of a Higgs boson in proton-proton collisions is extremely rare. It is so rare that we have to collide protons 40 million times per second to collect enough data to study the Higgs boson. One of the best decay channels to study the Higgs boson properties is the so-called golden channel where the Higgs boson decays to two Z bosons which further decay to electron-positron or muon-antimuon pairs. One such event is shown in Figure 1. These events have two pairs of leptons, which is a rare collision signature, making it easier to spot.  But even so, there are other collisions that make two Z bosons, finding and rejecting that background is an important part of data analysis at the LHC. Once these collisions are recognized, we can use the momentum and energy of leptons to fully reconstruct the momentum and energy of the Higgs boson. It took 3 years from 2010 to 2012 (called LHC Run 1) of collisions at the energy of 7 and 8 TeV to collect enough data for the Higgs boson discovery, and in the end, around 10 signal events (with around 5 background events) were needed to claim the discovery.

After upgrades were made, another four years from 2015 to 2018 (called Run 2) of even more intense collisions at even higher energies of 13 TeV were analysed. The increase in collision energy makes it more likely for Higgs bosons to be produced, so helps immensely to study the Higgs in more detail. Different ways of Higgs boson production were studied in detail with the CMS experiment in its golden decay channel. While the Higgs boson discovery was announced with just 10 events, this time around 400 signal events were collected and analyzed. This can be seen in Figure 2, where the mass distribution of events with four leptons can be seen evolving over the 3 years. The data is compared to the (blue) background and the (red) prediction of the standard model Higgs boson. There is a very clear peak at 125 GeV, the mass of the Higgs boson, in a place where the background does not show a peak at all. In addition to more collisions, other improvements were made to better study this interesting process. The main improvements to the analysis include the usage of advanced multivariate techniques for electron and positron reconstruction, the better understanding of the background events, and the use of improved theoretical calculations.

The Higgs boson can be produced in many different ways, all of which have a certain probability that is predicted very precisely by the standard model. The goal of this paper was to study the different production modes of the Higgs boson and measure them as precisely as possible. To test the standard model, we then compare the prediction with what we observed. In order to do so, in addition to the four leptons that come from the Higgs boson decay, we have also carefully studied other particles produced in the event. For example, there are four common ways to produce the Higgs boson in proton-proton colliders: gluon fusion, vector-boson fusion, associated production with a vector boson, and associated production with a pair of top quarks. Each one of these production processes leaves a different signature in the detector. For example, in associated production with a vector boson, we expect to see other objects besides the 4 leptons in the collision. This is because a third vector boson is produced together with the Higgs boson resulting in one or more extra leptons. This kind of information is used to develop powerful analysis and statistical tools in order to extract final results. Figure 3 shows the good agreement between the prediction and CMS measurements of cross sections for four main Higgs boson production processes. 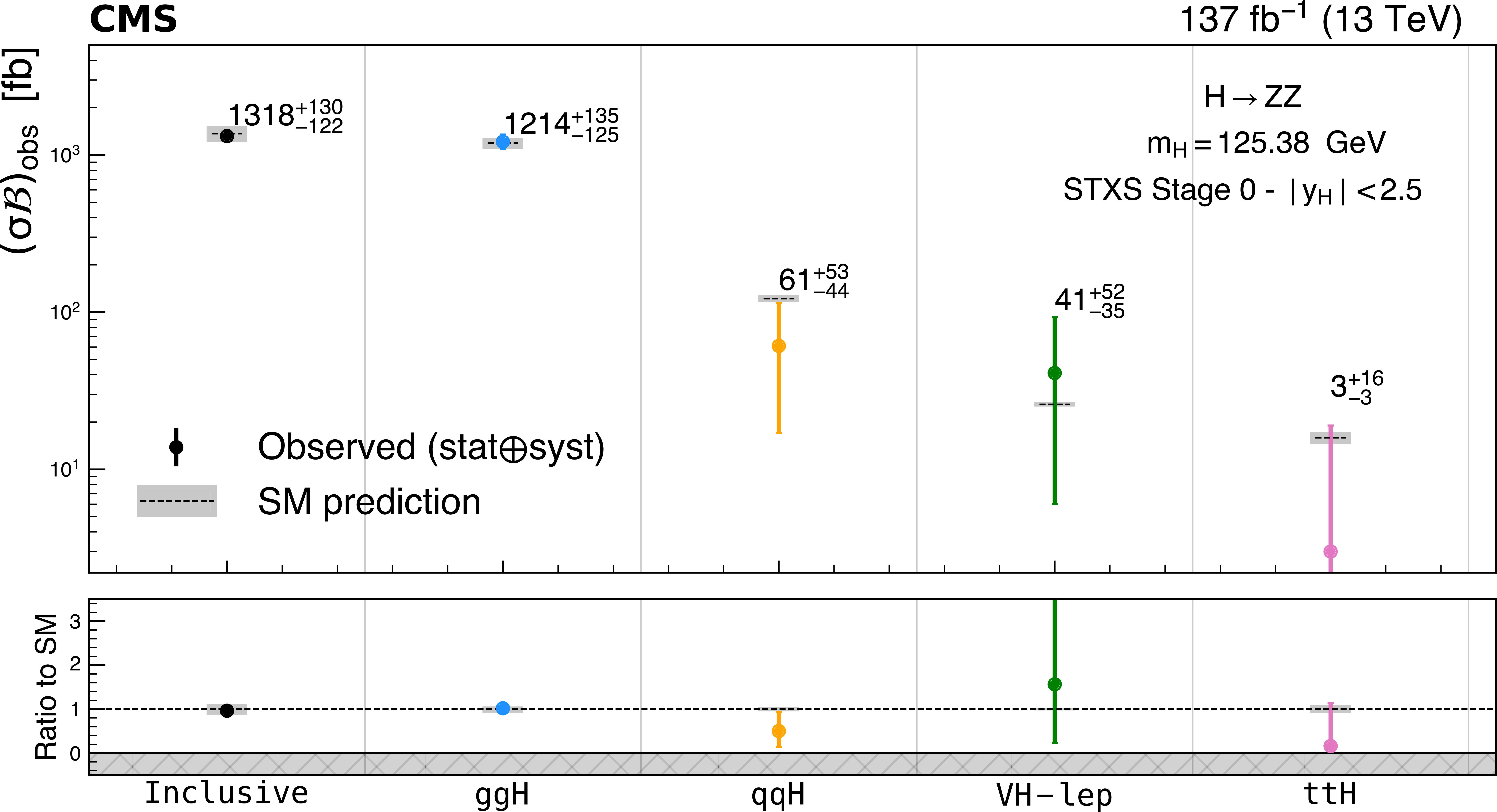 Even though cross sections of four main production modes agree with the prediction up to the uncertainty of the measurement, this does not mean that the standard model exactly agrees with the data. If there are new phenomena or even new elementary particles that we don't know of, they could have a small effect on the cross sections in particular kinematic regions. For example, there are theories beyond the standard model that predict different cross sections for the creation of the Higgs boson with high transverse momentum. This is why we went even further and split the production in different kinematic regions according to the properties of the Higgs boson. A set of discussions between the experimental and theoretical community led to an agreement on how these regions should be defined in order for us to be the most sensitive to new physics. This CMS paper presents the exciting first set of measurements of very granular production properties of the Higgs boson that can be seen in Figure 4. Here, the four main production modes are split into even more categories in order to check if some of them are not in agreement with the predictions. The conclusion of this set of results in the Higgs boson golden decay channel is that after the most detailed study so far, everything still remains in agreement with the standard model within the uncertainties of the measurements. 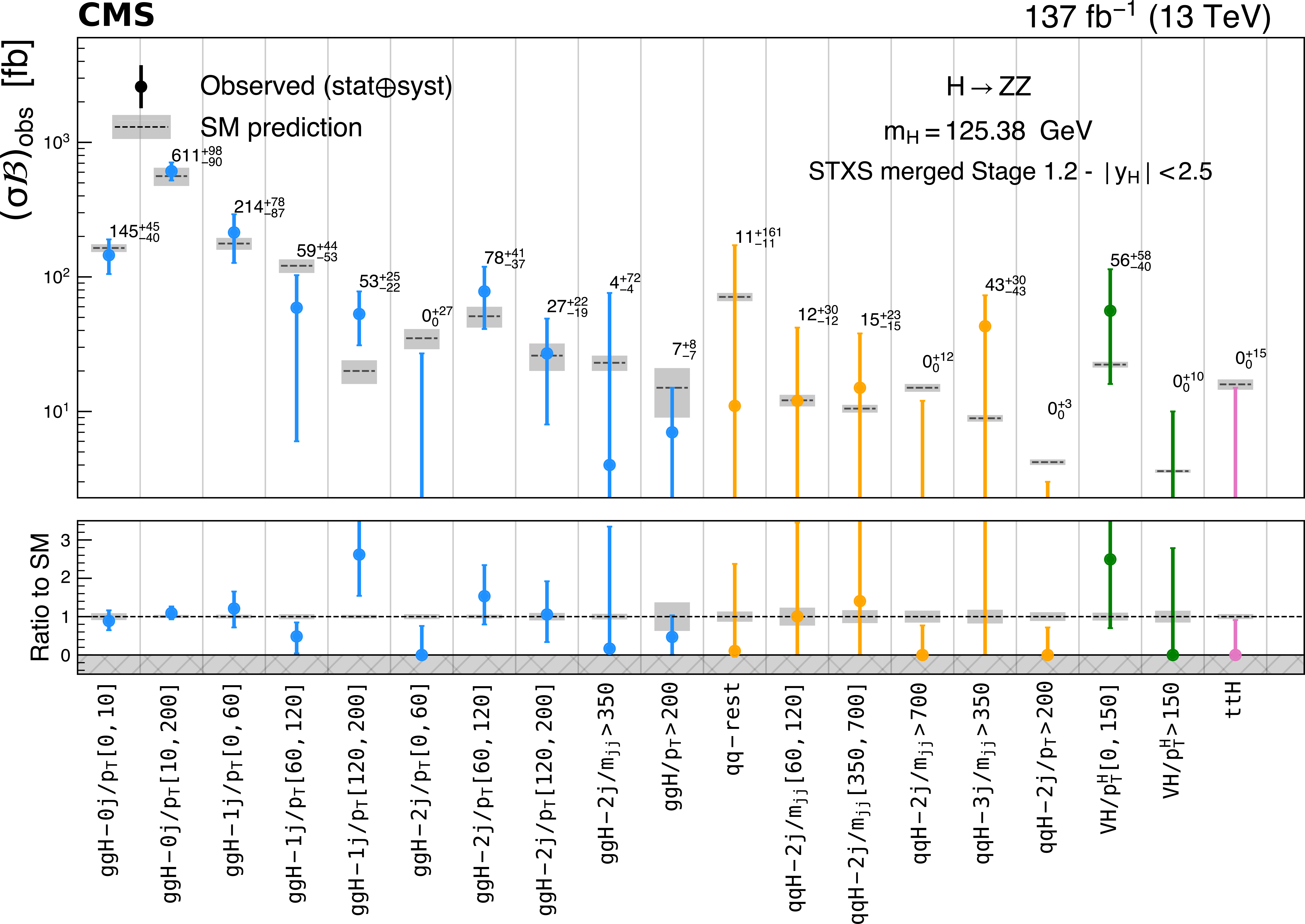 These new results will be combined with other Higgs boson decay channels in the CMS experiment and eventually also with the ATLAS experiment results to give a final conclusion on what we can learn from the Higgs boson in LHC Run 2. But this is not the end of the story. We are already preparing for the Run 3 and even further in the future for the High Luminosity Large Hadron Collider (HL-LHC). More collisions will help us get closer to answer the question if the discovered Higgs boson is the one as predicted by the standard model or if there are some very subtle anomalies due to new particles, new forces, or maybe even completely new.