Using light to make cousins of the electron 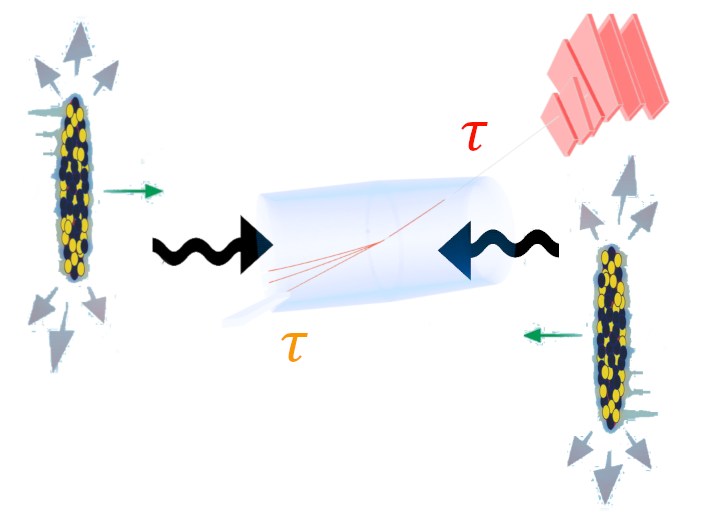 The quantum theory of electromagnetic interaction, called quantum electrodynamics (QED), is the most accurate and successful mathematical description of a large variety of natural phenomena. In numerous experiments over last many decades it has been verified with impressive accuracy. For example, the measured value of the magnetic property of the electron matches with the theoretical prediction within one part per billion! Interestingly, that of the muon, measured to 9 significant digits after the decimal, is currently exhibiting an interesting difference from the prediction of the established theory of particle physics, the standard model. No wonder that this tension has attracted, a lot of attention from scientists since it may hint about some short-comings in the standard model. Naturally, we ask about the situation when it comes to the other cousin of the electron, the tau lepton (𝝉). Unfortunately, the short lifetime of 𝝉 constrains the achievable accuracy in measurements. This leaves ample room to search for physics beyond the standard model in 𝝉 related measurements. The coupling of the photon with the 𝝉 may also be affected by (new or unknown till now) physics beyond the standard model. This hypothesis can be conveniently put to test at the LHC.

Many of the recorded proton-proton collisions at the LHC produce 𝝉 leptons, but invariably, there are other particles which clutter the recorded event. The CMS Collaboration resorted to a novel trick. When the LHC collides heavy ions, lead (Pb) to be specific, the lead isotopes are stripped with the electrons, but there are 82 protons and 126 neutrons. The high electric charge of the ions provides an intense source of photons, which are excellent for testing various prediction of the theory of quantum electrodynamics. During the beam collision process, when the Pb ions pass each other at a distance of more than twice the radius of the Pb ion, the ions are not broken up, but occasionally two photons are emitted from oppositely moving ions. In turn, these photons may scatter off to produce a pair of 𝝉 leptons, if sufficient energy is gathered. Since the Pb ions are highly boosted in the beam directions, you can imagine, in an end on view, that they are more like bulged discs. By studying such scattering processes in ultraperipheral collisions of heavy ions one can measure potential anomalies of the photon coupling to the tau lepton.

Recently, the CMS Collaboration reported the observation for the first time of the production of two τ leptons using the collision of photons from lead ions collected in 2015. Note here that each nucleon of the lead ion beams were accelerated to an energy of 5.02 TeV. Compare this with the usual proton-proton collisions at Run 2 operation of the LHC where each proton had an energy of 6.5 TeV. The analysed data was collected in November of 2015, and corresponds to a small portion of the available heavy ion collisions collected so far by the CMS experiment. Dedicated reconstruction and analysis techniques allowed the extraction of the signature of the 𝝉 lepton from its decay products with high efficiency. This ensured the observation of the signal process with a high statistical significance. Quite uniquely, in these processes the level of backgrounds are quite small, which is a big boon while searching for the signal. 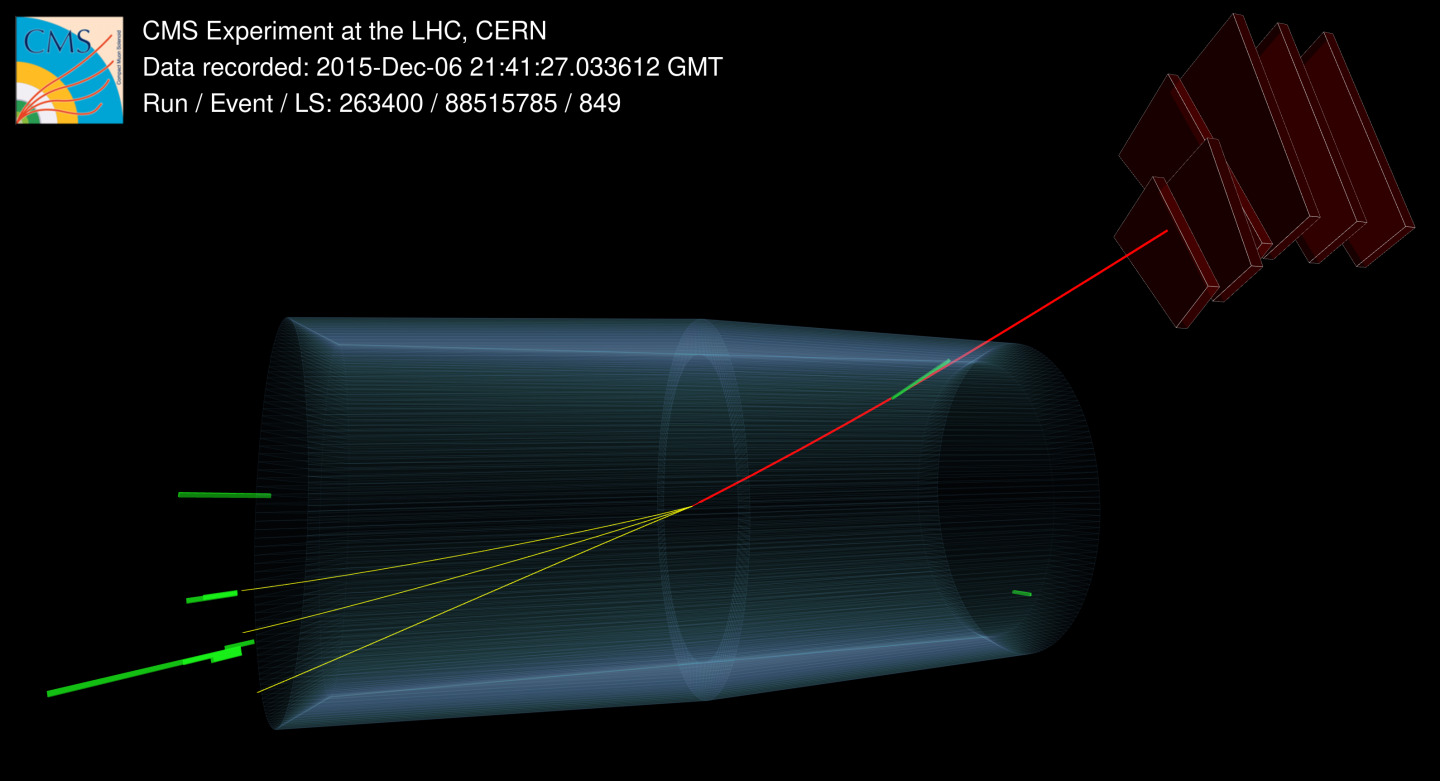 Figure 1: Display of a candidate γγ → ττ event measured in PbPb ultraperipheral collisions at CMS. The event is reconstructed as having a leptonic τ decay, τ → μν (track produced by the μ is indicated by red), and a hadronic τ decay, τ→πππν (with 3 charged pions tracks indicated by yellow and their energy deposits by green). Find the 3-dimensional interactive version here.

Although similar pair production of electrons and muons through the interaction of photons has already been seen in the Pb ion collisions at the LHC, the latest CMS result represents the first measurement of this process with τ leptons. The visible signature of this process is two τ leptons transforming themselves to lighter particles (muons or pions) in an almost empty detector; see a candidate collision in Figure 1. You can inspect it even better via 3-dimensional interactive image here. Events were selected during data taking based on the presence of a muon, and then further reconstructed offline in the analysis. One of the characteristics used to identify the signal is the relative azimuthal angle or the acoplanarity, defined between the muon and the pions (from the decay of the two τ leptons). The distribution peaks when the τ leptons are back to back (when the angle is π radian or 180 degrees), as shown in Figure 2. 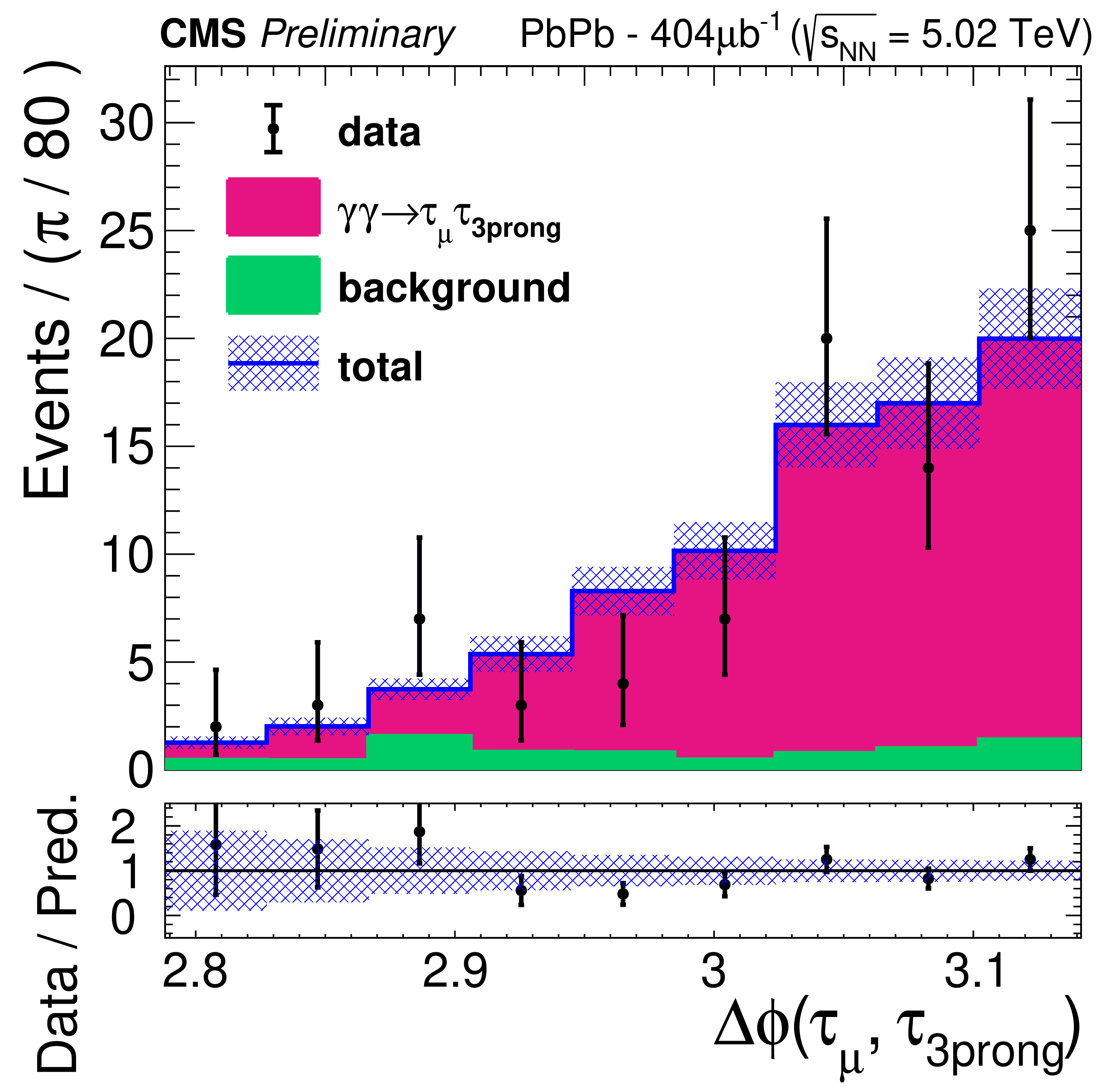 Figure 2: The difference in azimuthal angle between the decay products of the two selected τs. The signal (pink histogram) is stacked on top of the background (green histogram). The total is displayed by a blue line and the shaded area shows the uncertainty. The data are represented by the points with the vertical bars showing the statistical uncertainties. The lower panel shows the ratios of data to the signal plus background prediction, and the shaded bands represent the uncertainty.

Although this constitutes another verification of the fundamental theory of photon-photon interactions, the currently large uncertainty in the measurement leaves ample room in the search for possible deviations from those expected from the standard model. In comparison to the muons, deviations of the τ lepton are expected to be hundreds of times larger due to the larger mass, about 18 times. This measurement already provides some constraints on such a deviation, although not yet as good as those acquired more than 15 years ago at the previous electron-positron collider at CERN called the LEP.  CMS has not yet completed analysing all the data collected in heavy ion operations of LHC Run 2. With the much larger data set expected from the future LHC operations, physicists will then continue to improve the precision of the measurement and use photo-production of the τ lepton to explore phenomena beyond the standard model. Be on a vigil!