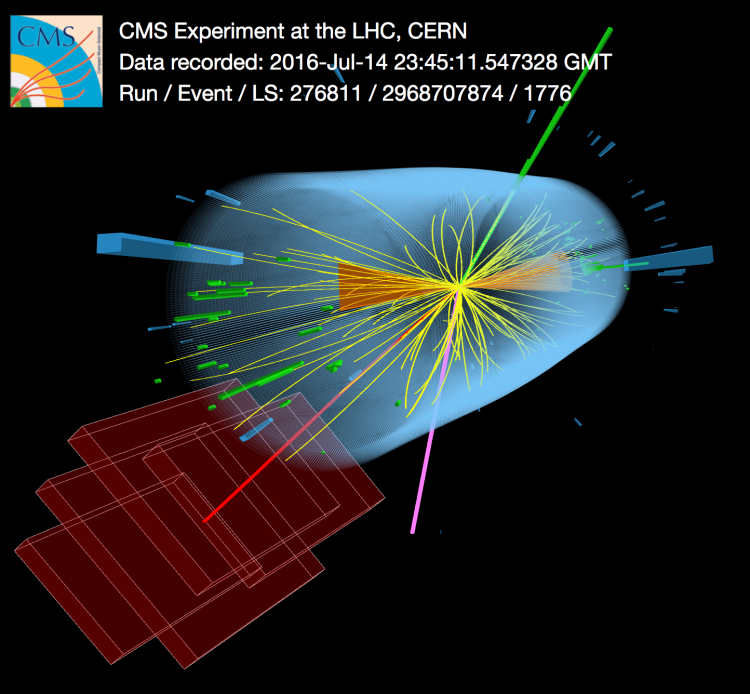 Display of an LHC collision detected by the CMS detector that contains a reconstructed top quark-antiquark pair. The display shows an electron (green) and a muon (red) of opposite charge, two highly energetic jets (orange) and a large amount of missing energy (purple).

For the first time, CMS physicists have investigated an effect called the “running” of the top quark mass, a fundamental quantum effect predicted by the Standard Model.

Mass is one of the most complex concepts in fundamental physics, which went through a long history of conceptual developments. Mass was first understood in classical mechanics as a measure of inertia and was later interpreted in the theory of special relativity as a form of energy.  Mass has a similar meaning in modern quantum field theories that describe the subatomic world. The Standard Model of particle physics is such a quantum field theory, and it can describe the interaction of all known fundamental particles at the energies of the Large Hadron Collider.

The experimental verification of the running mass is an essential test of the validity of Quantum Chromodynamics. At the energies probed by the Large Hadron Collider, the effects of physics beyond the Standard Model could lead to modifications of the running of mass. Therefore, a measurement of this effect is also a search for unknown physics. Over the past decades, the running of the strong coupling constant has been experimentally verified for a wide range of scales. Also, evidence was found for the running of the masses of the charm and beauty quarks.

Figure 1: Display of an LHC collision detected by the CMS detector that contains a reconstructed top quark-antiquark pair. The display shows an electron (green) and a muon (red) of opposite charge, two highly energetic jets (orange) and a large amount of missing energy (purple). Experimentally, interesting top quark pair collisions are selected by searching for the specific decay products of a top quark-antiquark pair. In the overwhelming majority of cases, top quarks decay into an energetic jet and a W boson, which in turn can decay into a lepton and a neutrino. Jets and leptons can be identified and measured with high precision by the CMS detector, while neutrinos escape undetected and reveal themselves as missing energy. A collision that is likely the production of a top quark-antiquark pair as it is seen in the CMS detector is shown in Figure 1. Such a collision is expected to contain an electron, a muon, two energetic jets, and a large amount of missing energy.

The measured running of the top quark mass is shown in Figure 2. The markers correspond to the measured points, while the red line represents the theoretical prediction according to  Quantum Chromodynamics. The result provides the first indication of the validity of the fundamental quantum effect of the running of the top quark mass and opens a new window to test our understanding of the strong interaction. While a lot more data will be collected in the future LHC runs starting with Run 3 in 2021, this particular CMS result is mostly sensitive to uncertainties coming from the theoretical knowledge of the top quark in Quantum Chromodynamics. To witness the top quark mass running with even higher precision and maybe unveil signs of new physics, theory developments and experimental efforts will both be necessary. In the meantime, watch the top quark run!