The Weak Mixing of Light and Heavy 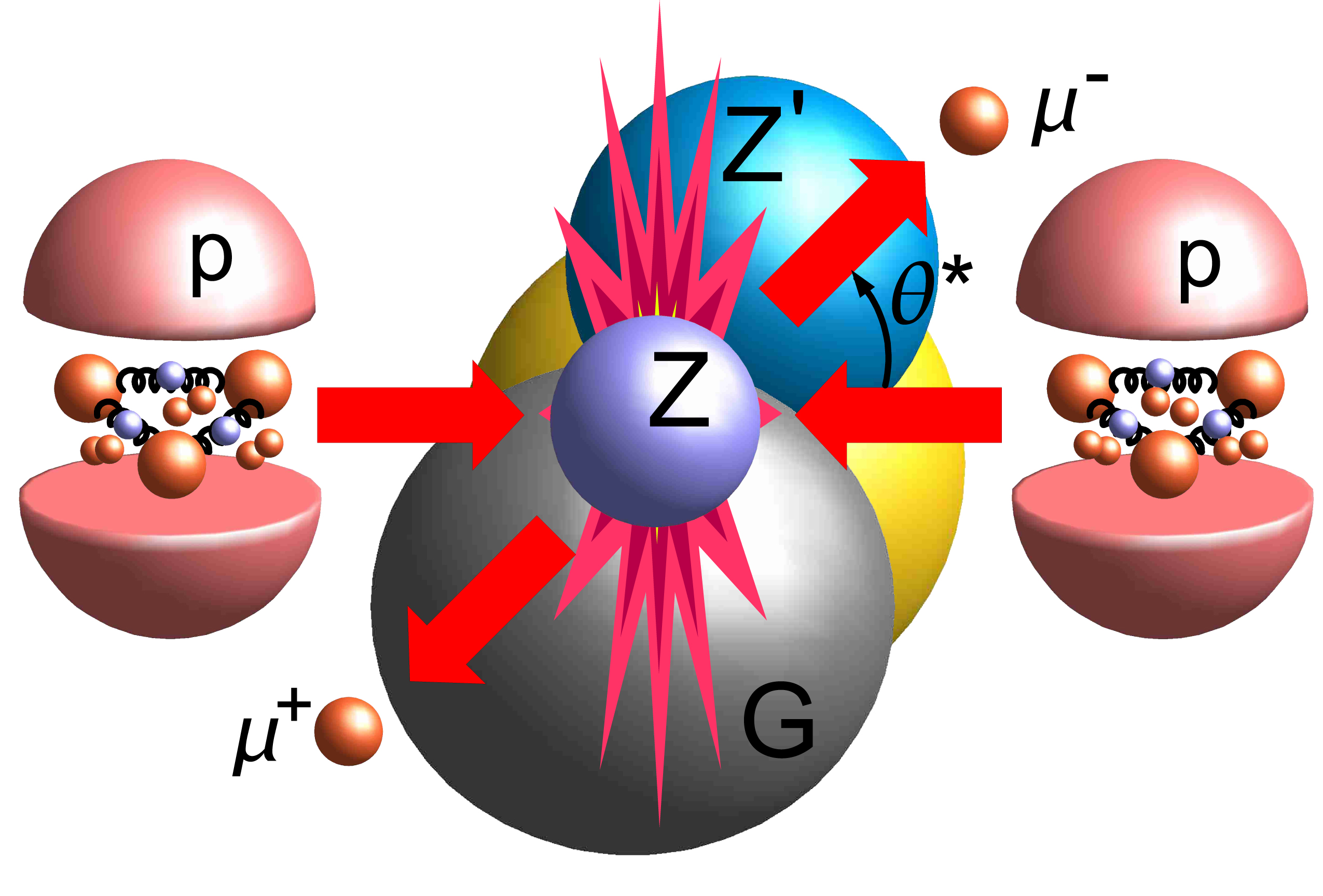 An event of proton-proton collision with a new particle produced and decayed to two muons. The angle &amp;theta;* of the decay is defined with respect to the incoming quark direction.

The source of energy for most of the life on our planet originates from proton-proton collisions at the core of the Sun, which occur at an energy (or temperature) about a billion times less than the collision energy of the LHC. Due to emission of heavy weak bosons, which must initiate this fusion, the process is slow and allows the Sun to supply us with energy for billions of years. In the end this energy is carried to us by massless photons (γ bosons). It is believed that in the early moments of the Universe all electroweak bosons were equal and massless, but as the Universe cooled, it had to make a spontaneous choice and this symmetry was broken as the neutral electroweak W and B bosons mixed to produce the now known γ and Z. The degree of their mixing is called the weak mixing angle θW. Why the weak bosons acquire mass, while photons remained massless, is the key question to be answered by the LHC. The Higgs mechanism, which postulates the Higgs field, is one possible explanation.

While this idea of electroweak symmetry breaking is only a hypothesis, it provides a very precise relationship of the W and Z boson masses and the weak mixing angle. Moreover this mixing angle becomes the only unknown parameter which determines the relative strength of interaction of all matter particle (quarks, leptons) with Z or γ, extending the pure electric charge strength in electromagnetic interactions with γ. All these relationships have been verified at experiments at the CERN LEP collider, housed in the same underground tunnel as the LHC more than a decade ago, as well as at the SLAC Linear Collider (SLC). At these electron-positron colliders, the angular distributions of the pairs of matter-antimatter particles produced in decay of γ or Z bosons allowed the mixing angle θW to be measured to a 0.1% precision.

At the proton-antiproton Tevatron collider, similar measurements were performed more recently in the quark-antiquark annihilation process. At the proton-proton LHC collider, the ambiguity of the quark direction from interacting protons makes the above angular distribution impossible to measure directly. Thus, the CMS experiment had to develop more elaborate techniques. The analysis followed the LEP measurement idea and Tevatron hadron environment implementation, but went deeper into the proton structure to deduce the quark assignment based on the mass and boost of a created system (γ → μ+μ− or Z → μ+μ−).

The approach became a synergy of the multivariate techniques developed for the Higgs polarisation analysis at the LHC and B-meson polarisation with interference analyses at the B-factories. The philosophy of the developed likelihood analysis was to first produce a phenomenological model of the process and then introduce detector effects into the model, all written analytically and tested against detailed numerical simulation.

The CMS measurement of the weak mixing angle parameter has about 1% precision with the summer 2011 data, which is a proof of principle that this kind of analysis can be done at the LHC. The precision of this analysis, which is now accepted for publication in the Physics Review journal, with this amount of data is a pleasant surprise. This measurement confirms the standard model picture in a completely new process of quark-antiquark annihilation into a muon-antimuon pair, while LEP, SLC, and Tevatron tested this with electron-positron pair in either the initial or the final state. The analysis technique allows great flexibility in the model with new free parameters to be included, such as interference of the γ and Z with possible new gauge bosons. Moreover, application of the angular analysis tools boosts sensitivity in the direct search for the Higgs boson.

The nature of electroweak symmetry breaking and the mixing of the light photons and heavy Z bosons that's essential to our existence remains a mystery. At the LHC, we may finally be able to explain this, but this requires elaborate techniques to boost sensitivity in data analysis. The measurement of the weak mixing angle at CMS is an interesting example which presented a new set of challenges, but its techniques have roots in experiments from LEP and SLC to the Tevatron and to the B-factories.