What does the decay of a bottom quark look like? 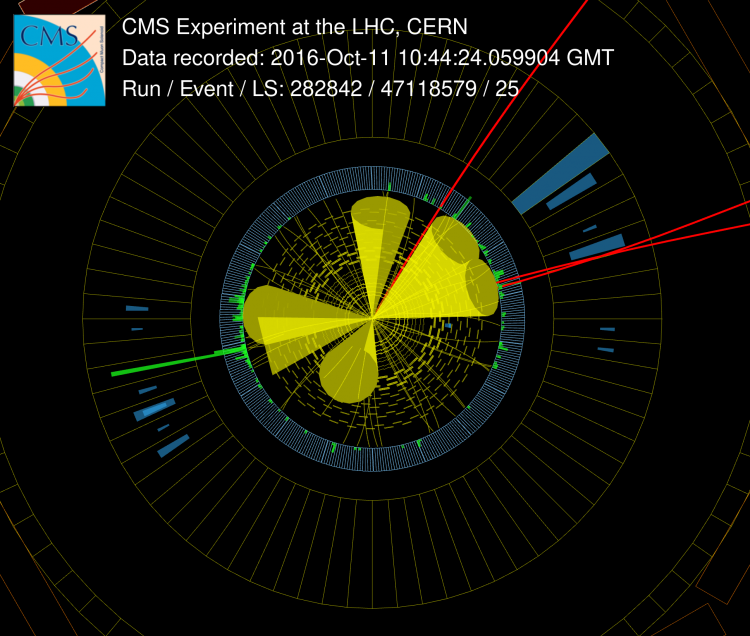 What does the decay of a bottom quark look like?

Fragmentation, also known as hadronization, is when particles that contain quarks or gluons create other particles via the strong interaction. The fragmentation process cannot be exactly calculated with the standard model and must be described phenomenologically. The study of the Higgs boson and the top quark, and all other measurements that use bottom quarks, rely heavily on a precise knowledge of how bottom quark jets behave. The best model we currently have is called the Lund-Bowler fragmentation function. This function has many parameters, most of which can be found by studying the behavior of light quarks. However, two quantities are specific to the bottom quark: the bottom quark mass and how the shape of jets changes for bottom quarks, which is described by a parameter (rb). The best information on rb  was up to now derived from data collected by the LEP experiments (at CERN in the 1990s) and the SLD experiment (at SLAC also in the 1990s). These colliders used electron-positron collisions, which are fundamentally different from the proton-proton collisions seen at the LHC, and since the environment is so different it is not necessarily true that b quark jets will behave exactly the same at a hadron collider like the LHC. The precision of these historic measurements is insufficient for many current and future experiments. This is where the new result from the CMS collaboration at the LHC comes into play.

The top quark is one of the most fascinating particles of the standard model particle physics (SM). Since its discovery in 1995, the top quark has received special attention from particle physicists, mainly due to its large mass of 172.5 GeV. This makes it the most massive fundamental particle known. Because of its large mass, the top quark decays almost 100 % of the time via a W boson and bottom quark. This decay happens faster than any information can propagate away, so the bottom quark is wholly correlated with the state of its parent top quark. This means that any uncertainty introduced by the decay of the bottom quark translates directly into uncertainty on top quark measurements. One of the most important of these uncertainties is the fragmentation of the bottom quark.

Figure 1: Interactive (try zooming/rotating!) event display of a 13 TeV proton-proton collision in the CMS detector during 2016. The figure shows the particles emerging from the production of a pair of top quarks, which in turn decay into two W bosons and two b-quarks. The decay products of one of the b-quarks include a J/ψ meson which decays into a pair of oppositely charged muons. You can also check out this display on a separate page.

A new CMS analysis uses a novel technique to measure rb. Top quarks are produced copiously at the LHC, so the large statistics of top quark pair events allows a clean sample of b quarks for this study. Instead of fully reconstructing the decays of B hadrons (resulting from the bottom quark being bound with one of its hadronization products), the analysis uses the charged particle decays of the mesons D0 and J/ψ that contain charm quarks, coming from the B hadron decays. These can be accurately measured in the detector, and they are not sensitive to many of the uncertainties that affected the older measurements. These particles in turn decay into oppositely charged pairs of pions and kaons, and pairs of oppositely charged muons, respectively. The CMS experiment provides tools for identifying jets emerging from bottom quarks (known as b-jets), and by focusing on the charged particle decays of the D0 and J/ψ, the measurement relies only on the precision information provided by the CMS silicon tracker. Using the D0 and J/ψ greatly improves the accuracy of the measurement as there is no need to measure the rest of the B hadron decay.

The best fit from the experiment is rb = 0.858 +/- 0.048, and the uncertainty is roughly a factor of four times smaller than the fits to LEP and SLD data. This uncertainty takes into account both the experimental and data modeling uncertainties. Figure 2 compares the new CMS measurement, the simulation (labelled Pythia 8), and older the e+e- result. The consistency of the older and new measurements also makes another important statement. This is the first evidence that the way the b quark fragments is not strongly coupled to its collider environment. 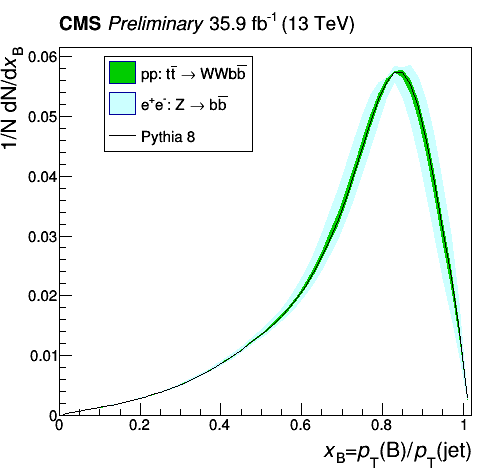 Figure 3: A plot of the Lund-Bowler fragmentation function. There is a sharp peak around a value of 0.8, and a steep falloff on both ends. The x-axis is the simulated bottom quark fragmentation defined as the fraction of the B meson momentum relative to the b-jet. The plot focuses on the shape for three scenarios: the black line indicates the value the CMS Collaboration currently uses in simulations. The cyan band is the current best fit value using LEP and SLD data, and the green band is the new CMS best fit value .

So what’s next? The fact that top quarks are now used for new precise measurements of the behaviour of other particles in the standard model means there is a wealth of other measurements that can be explored in the future. As stated, the uncertainty from the modeling of bottom quark fragmentation is one of the limiting factors in precision measurements of the top quark, including its mass, probability of production, and momentum. The knowledge of bottom quark fragmentation is also one of the important uncertainties in the study of the Higgs decay into a pair of bottom quarks. Beyond this, the new CMS result will also impact many searches for new physics processes which can have multiple b-quarks in their decay chains. By significantly improving the knowledge of how a b quark fragments, this measurement will make a huge number of LHC studies more precise, now and in the future.