Researchers at the Florida Institute of Technology in Melbourne, Florida, USA, are working on Gaseous Electron Multiplier (GEM) detectors that utilize cosmic ray muons for homeland security. This research began under a grant from the U.S. Department of Homeland Security in 2007.

To protect national borders from nuclear contraband, existing radiation monitors search incoming cargo for radiation emitted by special nuclear material, which includes plutonium and some isotopes of uranium. This radiation, however, can be blocked by shielding made of iron or lead, posing a special challenge for homeland security and our current monitoring technology. 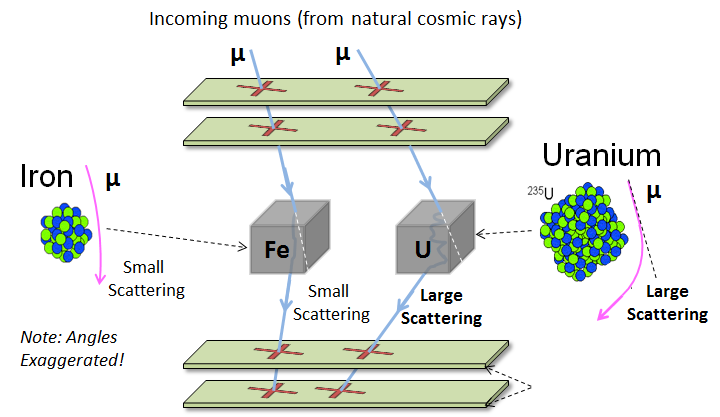 Fortunately, muon tomography is a promising alternative. Experiments have already shown that we can probe shielded material by measuring the deflections of cosmic ray muons using GEM detectors (see diagram to the right).

Inspired by the design of GEMs in CERN’s COMPASS experiment, the team at Florida Tech designed and constructed their own GEM detectors for use in homeland security. These GEMs are made of an electrically-insulating foil sandwiched in copper and dotted with microscopic holes. Each hole is a mere 60 millionths of a meter in diameter—about the average width of a human hair! The completed detector measures 30 x 30 x 1 cm. 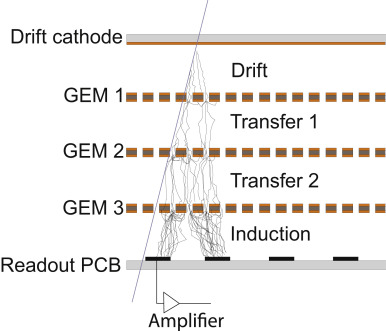 When a particle (in this case, a cosmic ray muon) enters the detector and passes through one of the holes, an “avalanche” of electrons is produced. The electric field generated across the copper electrodes then pulls the electrons to an electronic amplifier where they are read out as an electrical signal. This voltage gives us information about the position of the muon, which subsequently informs us about its deflection. With this data, we can learn about the material within an enclosed area, like a shipping container. “Triple-GEMs” provide even higher gain because electrons avalanche through three layers of multipliers before being read out (see diagram to the left).

In addition to homeland security, GEMs will also play a major role in the upcoming CMS upgrade. This upgrade will involve the installation of large-area GEM detectors, called GE1/1, in a certain region of the forward muon endcap. The existing endcap system only uses cathode strip chambers in this specific region, which are unable to handle the large inundations of muons that are expected after the upgrade.

But thanks to the GEM detector’s high spatial resolution, using GE1/1 in conjunction with the CSC system will greatly improve deflection measurement capabilities. In addition, GE1/1 is relatively inexpensive, very efficient, and can handle large fluxes of muons.

In the two years leading up to their 2019 installation, the GE1/1 detectors are being constructed at CERN, Florida Tech, and other sites worldwide. In the future, GEMs are also planned to be installed in other areas of the endcap to further improve muon reconstruction.