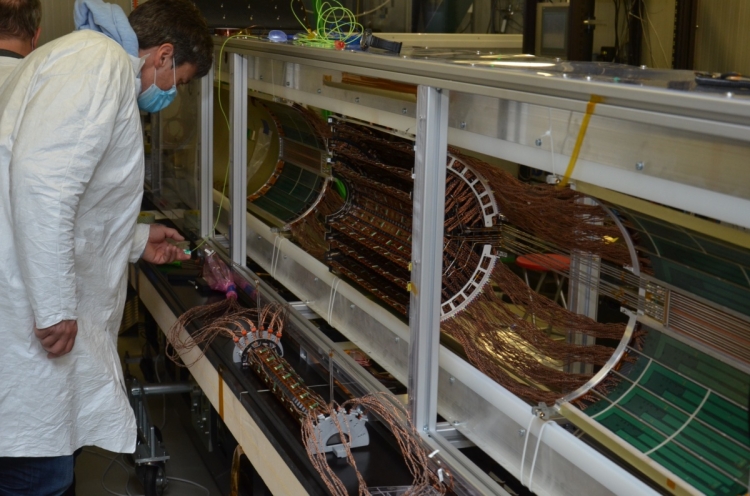 The pixel detector, though only about the size of a small suitcase, contains 124 million pixels, allowing it to track the paths of particles emerging from the collision with extreme accuracy. It is also the closest detector to the beam pipe, with cylindrical layers roughly at 3cm, 7cm, 11cm and 16cm and disks at either end, and so will be vital in reconstructing the tracks of very short-lived particles.

Each of the four layers is composed of individual silicon modules, splitted into little silicon sensors, like tiny kitchen tiles: the pixels.  Each of these silicon pixels is 100µm by 150µm, about two hairs widths. When a charged particle passes through a pixel, it gives enough energy to eject the electrons from silicon atoms. A voltage applied to the sensor allows collecting these charges as a small electric signal, which is amplified by an electronic readout chip (for a total of 16 chips per module).

Knowing which pixels have been touched allows us to deduce the particle's trajectory. And because the detector is made of 2D tiles and has four  layers, we can create a three-dimensional picture.

However, being so close to the collision means that the number of particles passing through is huge: the rate of particles received at 3cm from the beamline is around 600 million particles per square centimetre per second! The pixel detector is able to disentangle and reconstruct all the tracks particles leave behind, and withstand such a pummeling over the duration of the experiment.

Because there are 124 million pixels, the power for each must be kept to a minimum. Even with  only around 50 microwatts per pixel, the total power output is 7.5kW- around the same as the energy produced by two electric ovens. So as not to overheat the detector, the pixels are mounted on cooling tubes and kept at -20°C degrees. Operating at this temperature also helps to reduce the effects of the damage to the silicon modules inflicted by the continuous stream of particles.