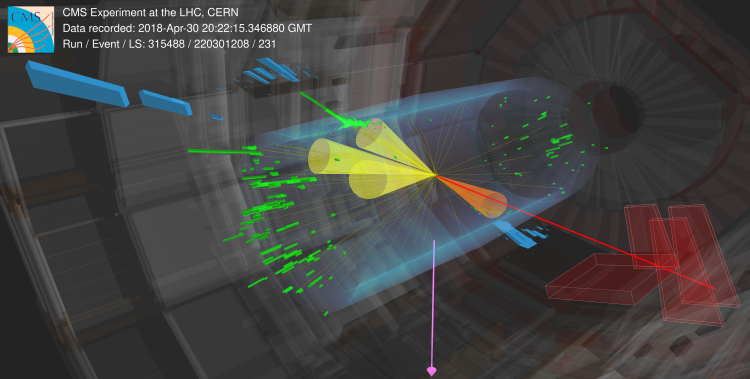 CMS has developed a new method to measure the properties of the top quark with high precision. It relies on an innovative way to cluster particles into jets. 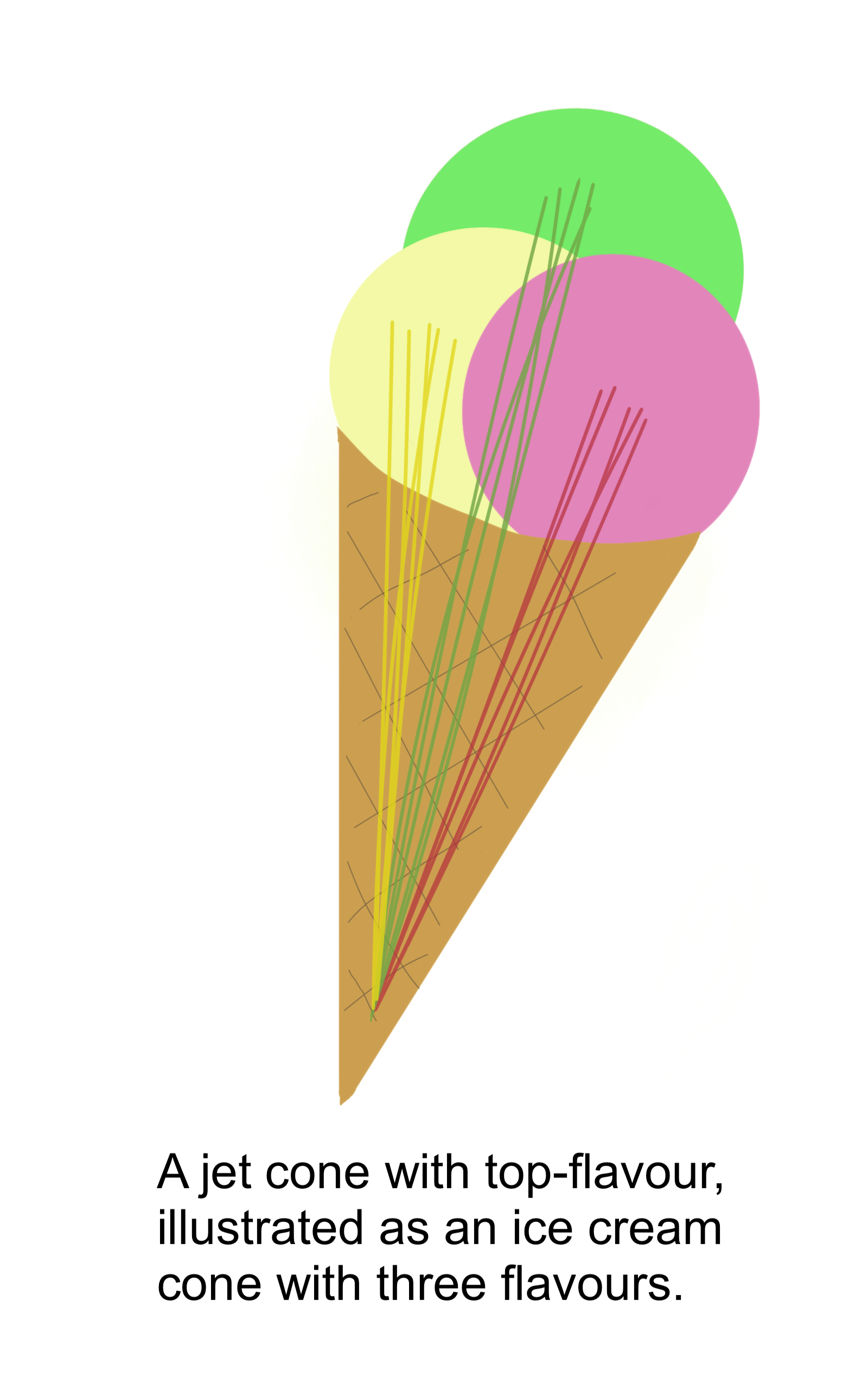 The top quark is the most massive elementary particle we have discovered so far. Due to its large mass, the top quark is of particular relevance to the standard model - which is our theoretical description of nature at the smallest distances we can experimentally probe. When measuring the properties of the top quark, jets are indispensable.

In particle physics, we call jets bundles of particles that fly in the same direction at nearly the speed of light. The name jet comes from fluid dynamics, where a jet is a stream of fluid. Jets are footprints of quarks and gluons created in high energy collisions. Because quarks and gluons cannot exist as free particles due to the nature of the strong force, they fragment into a cascade of stable particles which we can detect. These cascades are bundled into jets, which is a consequence of special relativity. The large Lorentz boost in the direction of the created quark or gluon results in the outgoing particles to be collimated. In our detectors, jets appear as electrical or optical signals collected by close-by detector sensors, forming regions of high energy density in a localised area. Jets are a key at the LHC for measuring fundamental parameters of nature.

The particles initiating jets come in different types, which we call flavours. We can distinguish between quarks and gluons, but also between quarks of different flavours. Light quarks, like up, down, or strange quarks, result in jets that are nearly indistinguishable. The heaviest quark, the top quark, decays to a W boson and a bottom quark, where the W boson decays further into either two leptons or into two light quarks. When the top quark is produced at rest, the signature with three quarks results in three separate jets in our detector. These can be used to fully reconstruct the top quark decay and measure the top quark mass. The most precise measurements of this fundamental parameter are based on this signature.

Because of its large mass, it is very rare for the top quark to receive a high Lorentz boost such that all three quarks from its decay end up in the same jet. Although rare, these top-flavoured jets allow for new methods to measure properties of the top quark. In particular, we can access the top quark mass by measuring the closely connected jet mass - the mass formed by all particles in the top-flavoured jet.

We apply a novel method of reconstructing jets to capture the full top quark decay. The algorithm we use is called XCone, and it allows us to reconstruct a large jet with three subjets inside. One subjet originates from the decay cascade of the b quark, and the other two from the different-flavour light quarks from the W boson decay. You can picture the result of this algorithm as an ice cream cone with three different flavoured scoops of ice cream inside. This method enables us to calibrate the jet mass, where we can use the precisely known mass of the W boson as a reference and compare it to the W mass measured with two subjets of our XCone jet. This calibration is the key to the experimental precision we achieve in this measurement.

Top quarks are mostly produced in pairs in proton-proton collisions. We exploit this to select our events, where the decay of one top quark helps us to identify the event, and the second top quark decay we use to measure the jet mass. A typical event selected for this analysis is shown in Figure 1. The signature of the top quark decay to select the event is a muon (shown as a red line), missing momentum (pink arrow), and a bottom-flavoured jet (orange cone) close to the muon. On the opposite side of the detector are the three subjets (also shown as yellow cones) of the top-flavoured XCone jet, which we use for our measurement.

Figure 1: Event recorded with the CMS detector (try to zoom and rotate!), consistent with the signature of a highly energetic top quark pair. One top quark decays into three quarks and the other one into one b quark, a muon and one neutrino, which is not detected. Shown are the reconstructed jets as orange and yellow cones, where the three jets in yellow correspond to the top quark decay into three quarks. Signals in the electromagnetic and hadron calorimeters are shown by green and blue bars, respectively. The path of the muon is shown by a red line with the corresponding signals in the muon chambers illustrated by red boxes. You can view the interactive event display on this separate page.

The LHC has produced so many top quarks, that even if we only select top quarks with high momenta, we find more than 40,000 events for our measurement. These many events allow for a precise calibration of our top-flavoured XCone jets, as well as a detailed study of the influence of additional radiation in our simulation, which can affect the jet mass. For this study, we use the angular distribution of energy inside a jet. We exploit that additional radiation changes the expected three-prong structure, allowing us to narrow down the parameters in the simulation to a range where the predictions are compatible with the data.

In order to obtain a measurement that is independent from our experiment, we correct the data for detector effects. The resulting distribution of the jet mass is shown in Figure 2. Comparing the data to the predictions from simulated top quark pair production shows how much this distribution would change if the top quark mass would be different. We use this comparison to perform a statistical test, resulting in a precise top quark mass of 172.76 ± 0.81 GeV. Thanks to the developments described above, we improved the precision of this measurement by a factor of three with respect to an earlier measurement. This results in an experimental precision in the top quark mass, which is comparable to the precision of the most precise measurements at small and moderate top quark energies. Thus, the presented analysis tests what we believe to be a fundamental law of nature, that the mass of a particle is independent of the particle's speed. 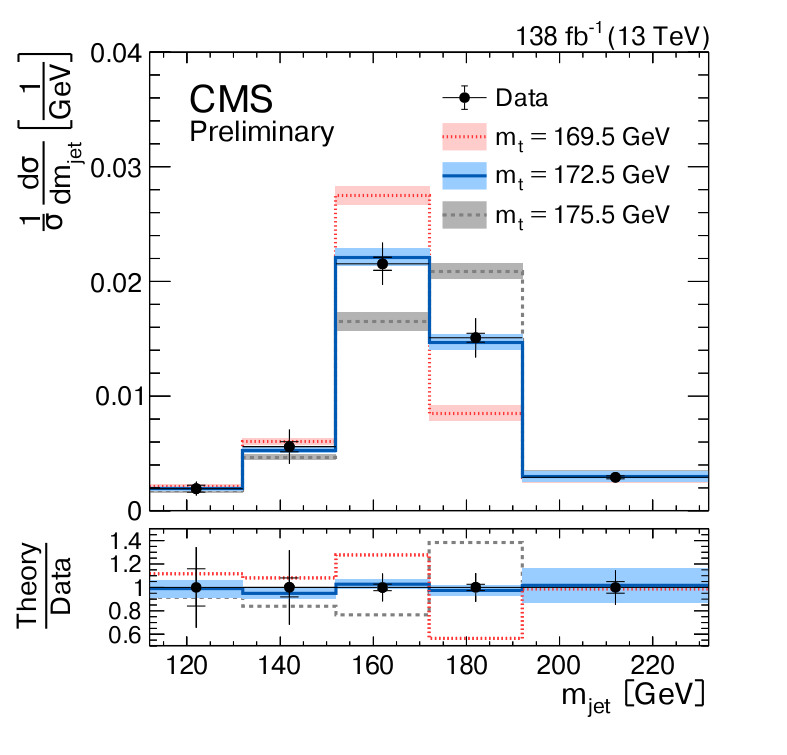 Figure 2: Measured probability distribution to produce a top-flavoure jet with a given mass in top quark pair production. The measurement with data (black markers) is compared to the predicted distribution for different top quark masses of 169.5 GeV (red), 172.5 GeV (blue) and 175.5 GeV (grey), obtained from simulations. The ratio of the bin content is shown in the lower panel. We observe that the data are described best by the top quark mass hypothesis of 172.5 GeV.

The measurement presented here deepens our understanding of the top quark mass as a fundamental parameter of the standard model, and sheds light on the inner structure of jets.

While the results are already very precise, the dataset used for this measurement is just a small fraction of what we expect to collect with the LHC in the near future. With more data, we will be able to measure jets at higher energies with even more accuracy, helping us to gain insight into the fundamental physics of our universe.