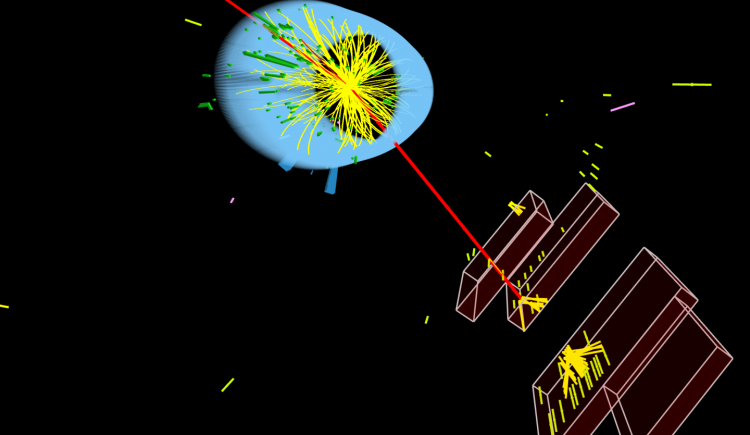 One of the main goals of the CMS experiment is to search for new phenomena in the collisions delivered by the CERN LHC. The LHC is the highest energy particle collider ever built, and thanks to this high energy CMS can study phenomena or search for particles that weren't accessible in previous collider experiments. Many such searches involve studying the muons produced in the collision. For example, there could be a new particle that creates one or several high energy muons in the final state. Such new particles must be produced very rarely; otherwise, we would have seen them by now. So to make sure we don't miss any signals, these muons need to be detected with high efficiency and with their properties precisely measured. Due to the way detectors like CMS measure muons, identifying and reconstructing those particles becomes increasingly challenging at high energy.

Muons leave signals in the inner layers of the tracker system and in the outer muon system. These trajectories are then reconstructed using software algorithms. Muon trajectories are not straight lines since muons are charged particles whose paths are bent by the magnetic field of the CMS magnet as they move through the detector. The direction of the bending is used to separate negatively charged muons from positively charged anti-muons. The higher the momentum, the less each particle gets deflected by the magnetic field, and the straighter the trajectory. The curvature of the track is used to determine the particle's transverse momentum (pT).

A collision featuring two very energetic muons is shown in the event display below. Here, CMS is viewed head-on, with the beam axis almost perpendicular to the screen. The many tracks reconstructed in the inner tracker are shown in green. Only a few of those particles are muons and make it beyond the tracking detectors, and we can see in red two muon trajectories reaching the red muon detectors. These two red tracks correspond to muons with transverse momenta of about 500 GeV, at which point it is almost impossible to see the track bending with the naked eye.

Figure 1: Event display of two high-momentum muons produced in CMS, shown as red lines traversing the red boxes that are the muon detectors. The muon on the right is creating a shower of extra particles when crossing the third layer of the muon system.

The efficiency to identify a muon in the collisions is shown in Figure 2, showing only the region where we have enough muons to produce a reliable efficiency measurement. In the LHC Run 1, from 2010 through 2012, the efficiency was around 98% as represented by the blue markers. Even though the efficiency was already extremely high, a decreasing slope can be seen when looking at higher values of the transverse momentum (pT), which is precisely where the muons need to be seen to search for massive new particles. To make sure that no bigger drop appears at even higher values, the reconstruction algorithm needed to be improved. Figure 2: Performance of muon identification in the CMS experiment as a function of the transverse momentum of the muon (pT). The performance of different algorithms from Run 1 (2010-2012) and Run 2 (2015-2018) are shown, for simulation and data.

There are a few things that make the reconstruction of energetic muons tricky. As the momentum increases and the track becomes more and more straight, it becomes more challenging to determine the muon's momentum from the bending in the magnetic field. Muon track reconstruction and muon momentum measurement rely on matching the tracks reconstructed in the inner tracker and the muon system, and these measurements are separated by more than 3 meters. The measurement of high-pT muons is susceptible to any imperfections in the knowledge of the exact location of each muon detector.  The precise determination of the curvature of this track requires locating where the muon crossed the detector layers with a precision better than 0.1 millimetres. And this requires knowing the exact location of all the muon detectors with similar accuracy, which makes the muon reconstruction sensitive to the "misalignment" of the different components of the CMS detector.

A second important effect is that a high energy muon travelling through the steel between the muon detectors will start losing energy through radiative processes.  A cascade of particles (called a shower) is created, and these complicate the muon trajectory measurements, as the traces left by the particles in the shower can be mistakenly treated as the muon trajectory. Such confusion by reconstruction algorithms leads to an incorrect momentum measurement. In the event display in Figure 1, we can see that the muon on the right created multiple particles in a muon shower in the third detector layer.

When showering occurs, dedicated algorithms handle the muon reconstruction and momentum measurement. The detectors containing a shower can be identified since they will typically see an unusually high number of particles from the shower. An algorithm called  "TuneP" picks the trajectory that is used for momentum and charge measurement. TuneP considers the possibility that any of the shower particles is the muon, and selects the most consistent measurement. TuneP also takes into account that the muon energy loss can change some of the muon measurements.

In Figure 3, simulation is used to compare the precision of the measurement in the case of the standard "Global" pT assignment and in the case where the dedicated high pT algorithm "TuneP" is used. The resolution on the momentum measurement degrades with higher momentum (from 2% to 8%). The new algorithm (red triangles) provides a definite improvement over the old one (green triangles). Figure 3: The muon momentum resolution for the standard “Global” and high momentum “TuneP” reconstruction algorithms. For comparison, muons with and without showers are shown.

Assessing the high energy muon resolution performance using data (as opposed to simulation) is particularly challenging as the true resolution is not known in data. While checks done with simulation are useful, the performance could be worse in real collisions. An example of this is visible on the very first plot above, where the muon identification efficiency was also computed using simulation (red triangles) and was found to be higher than what is computed in data (black dots).

One way to check resolution using data is by using cosmic muons. These particles are present all around us and also fly through the CMS experiment, even 100 meters underground. A cosmic muon traversing CMS very close to the centre of the detector looks like two muons emerging from a collision in the centre, with the two particles going in opposite directions. Comparing the measured pT of these two muons allows us to probe momentum resolution since the two values should be the same; it is the same muon in reality, after all. Figure 4 shows the results of a study using this method, showing a good match between the resolution measured using cosmic-ray muons (red points) and simulation (blue points). Figure 4: comparison of the resolution between simulated muons from LHC collisions (“MC”) and cosmic ray muons from cosmic ray data collected in 2016 and 2017.

The new results show that CMS maintains excellent muon reconstruction performance even at very high momenta. At 1 TeV, the momentum resolution is 5-6%, and thanks to the new algorithms, the resolution is mostly insensitive to showering and well reproduced by simulation. These tools are already being used in many new CMS results. Improvements in the muon reconstruction will allow us to search for new particles with even higher efficiency and better resolution, during LHC Run 3 starting in 2021 and after that during the High-Luminosity LHC.