How CMS weeds out particles that pile up 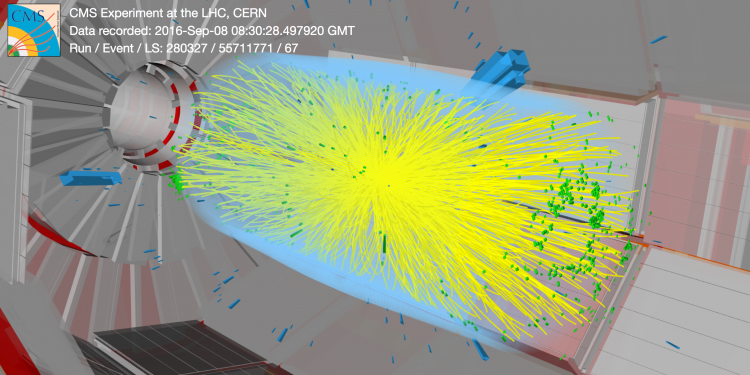 A three-dimensional display of a collision of two bunches of protons producing hundreds of particles from 86 identified interaction vertices, recorded by the CMS detector in 2016.

When the CMS experiment records particle collision events, a large number of unwanted extra collisions overlap in the detector and hide the rare particle collision that is worthwhile studying. CMS physicists have developed a new method that gives improved precision for the study of collisions even when occurring together with 50 or more extra interactions.

The main quest of the CMS experiment at the LHC is to investigate the rarest interactions of proton collisions in which elementary particles including the Higgs boson or new unknown particles, such as dark matter, are produced. To maximize chances for such interactions, the LHC doesn’t simply collide single protons, but rather large bunches of protons, such that multiple protons interact when the bunches collide in CMS. The particles from the interaction of interest are thus recorded together with particles from multiple additional interactions, so-called pileup interactions.

Separating out particles from an interaction of interest from several hundreds of particles produced in the pileup interactions poses a major challenge to every physics analysis of CMS data. While basic techniques for the mitigation of pileup have been used since the start of the LHC, CMS has now commissioned more advanced approaches and demonstrated their capability to cope with up to 50 pileup interactions.

The classical approach for pileup mitigation relies mainly on the fact that the CMS tracking detector can identify the interaction vertex of charged particles and rejects charged particles from pileup vertices. On average 60% of the particles produced in a proton-proton collision are charged, thus this technique can only fix that 60% majority of the pileup energy. The remaining energy from neutral particles is then subtracted under the assumption that it is uniformly distributed inside the detector. The shortcoming of this technique is that the assumption of uniform distribution of neutral particles is only valid when averaging over multiple collisions, but single collisions are not optimally reconstructed.

CMS has therefore introduced a new approach called PileUp Per Particle Identification, abbreviated as PUPPI, where the chance of each particle to originate from pileup is estimated for all particles, including neutral particles, as sketched in Figure 1. This technique makes use of the fact that neutral particles from the interaction of interest are typically aligned with charged particles from the interaction of interest, while the particles from pileup vertices are more uniformly distributed in all directions. CMS physicists can use this information to compute the chance for each neutral particle to come from a pileup collision, based on its surrounding charged particles. Figure 2: The purity of jets, i.e. the fraction of jets from the interaction of interest among all detected jets, including those formed from pileup particles. The previously used approach to pileup mitigation is shown in red, the PUPPI approach in blue.

The PUPPI technique allows to better identify the particles of the interaction we are interested in. The most frequently produced elementary particles in LHC collisions are quarks and gluons. Right after production, each quark or gluon forms a spray of tens to hundreds of hadron particles that is called a jet. Jets are crucial when measuring the Higgs boson that decays most frequently to quarks, but also when hunting for unknown particles that may decay to quarks and gluons.

Particles from pileup interaction worsen the resolution of the jet energy measurement and can also form jets purely composed of pileup particles: so-called pileup jets. Pileup jets can mimic the signature of other particles, for example of a Higgs boson, and represent a background that needs to be rejected as much as possible. Figure 2 shows that PUPPI can increase the purity of jets from 77% to 98%, i.e. remove a 21% contamination of pileup jets expected in collisions with 40-50 pileup interactions. This allows us to separate out the jets we are interested in, even when a very high number of pileup interactions are present. Figure 3: Resolution of missing transverse momentum as a function of the number of reconstructed interaction vertices. The performance without pileup mitigation is shown in red, the PUPPI performance in blue.

With these pileup mitigation techniques, the CMS experiment is thus able to cope with the pileup conditions of the LHC Run2 that ended in 2018. When the LHC restarts with Run3 in 2021, even more pileup interactions on average are expected. At the future high-luminosity LHC (HL-LHC), which should be operational as from 2026, up to 200 pileup interactions are expected. The PUPPI technique can cope with these extremely high numbers of interactions as well, however, upgrades to the CMS detector for better separation of charged and neutral particles and their vertices are necessary and in the works.