Increased confidence for the Higgs boson coupling to the charm quark 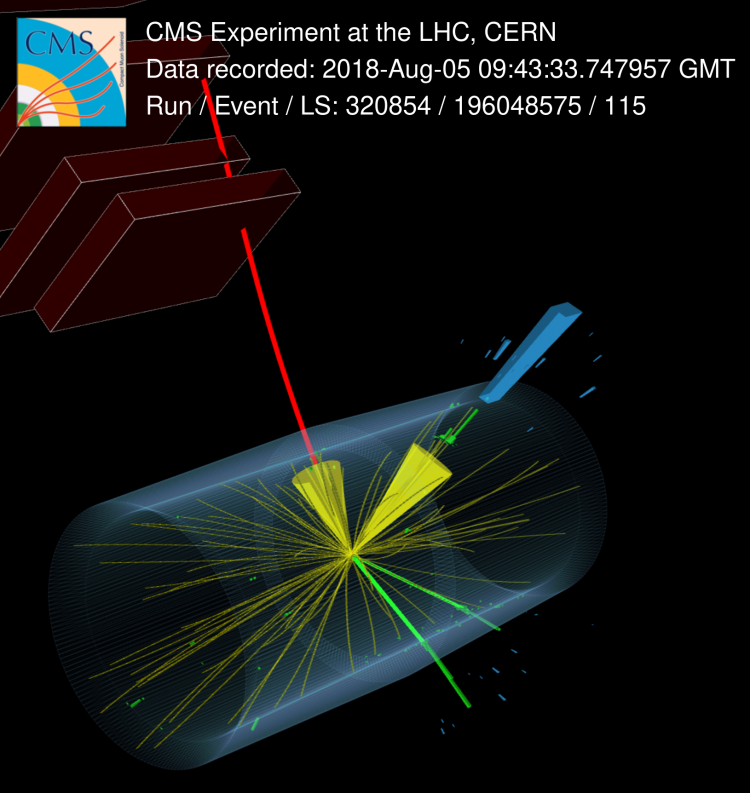 Event display of the ZH process where the Z boson decays to 2 electrons (green lines). Two yellow cones are the charm quark jets originating from the decay of the Higgs boson. One of these jets contains a muon (red line) 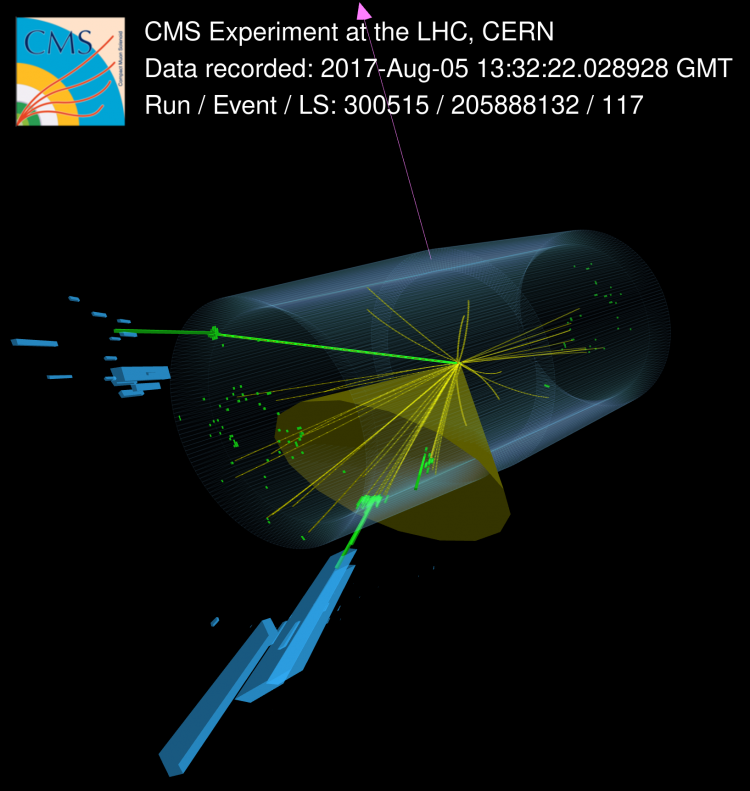 Event display of the WH process where the W boson decays to an electron (green line) and a neutrino, producing missing energy in the event; its transverse component is presented by the pink line. The Higgs boson has high momentum causing, in its decay, the merger of two jets due to the charm quark anti-quark pair into a single wide jet, represented by the yellow cone.

One of the intriguing questions in particle physics is the origin of mass of the fundamental particles. The question we ask is: is the Higgs boson responsible for the masses of all the known particles? The well-established theory of particle physics, called the standard model, says so. To test this idea, scientists measure the strength of the Higgs boson's interaction ("coupling") with other particles. The masses vary over a wide range (more than 13 orders of magnitude), and are determined experimentally. Since the masses are unique, the couplings have to be measured individually. Any deviation from the values predicted by the standard model would definitely indicate that something new is at work. That would be a clear sign of new physics beyond the standard model! However, the measurements of couplings are often highly challenging at the LHC experiments. 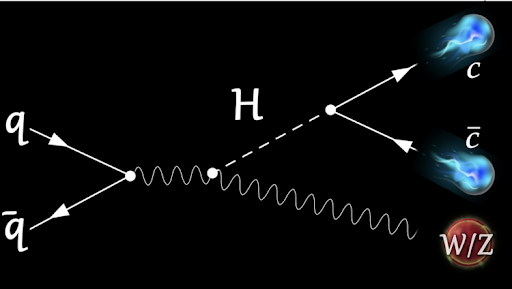 Figure 1: A cartoon of the fundamental process used to measure the Higgs-charm coupling. At the LHC, two oppositely moving quarks from the colliding protons interact weakly and produce a Higgs boson (dashed line) in association with a W or Z boson (wiggly line). The Higgs boson decays to a charm quark anti-quark pair.

The most direct way to measure the Higgs boson coupling to charm quark is to measure its decay rate to a pair of charm quark anti-quark, symbolically written as H→cc. According to the standard model, this decay occurs only about 3% of the time. A different event rate would imply an anomalous value of the coupling. Now, since the quarks cannot exist on their own, in the detector we observe the charm quark only as a shower of particles that are called jets. But there are plenty of possible and more prolific ways to produce jets at the LHC. Thus, identifying the charm quark jets from the H decay is like finding a needle in a haystack. Fortunately, when H is produced together with a W or a Z boson, the subsequent decay of W or Z via electron or muon mode provides a very distinct "tag" to the signal event and helps suppress most of the "backgrounds", i.e., events with jets but not involving a Higgs boson. Figure 1 depicts such a WH or ZH process.

About two years ago, the CMS Collaboration performed the first direct search of the coupling of the Higgs boson to charm quarks (How charming is the Higgs boson) using WH and ZH production processes. That result utilized only a quarter of the data volume collected by the CMS experiment during the LHC Run 2 data-taking period of 2016 through 2018. Recently, the CMS Collaboration released a new and more precise result for the Higgs-charm coupling measurement based on the full Run 2 data set. Actually, it is much more than just an update; it is exciting!

Figure 2: Two scenarios of the Higgs boson (H) production in association with a W or Z boson and its decay to a charm quark anti-quark pair. The production of H with low or high momenta leads to the two charm quark jets being (a) well separated in space, or, (b) merged, ie., they overlap with each other.

The scientists of the CMS Collaboration adopted a two-prong strategy of utilizing all possibilities to find the H→ cc process. As illustrated in Figure 2(a), for the Higgs boson with reasonably low momentum, the two charm quark jets are well separated or “resolved” in space. However, when the Higgs boson is boosted, or the momentum is high, the two charm quark jets collapse on each other, as shown in Figure 2(b). Hence, there is a single, merged but wider jet, whereby it is difficult to separate two sprays of particles originating from the pair of the charm quarks. In both cases, cutting-edge machine learning techniques, particularly graph neural networks, have been utilized to distinguish the charm quark jets from the background jets arising from other types of quarks or gluons, especially those from the bottom quarks due to their similarities to the charm quark jets. In addition, machine learning techniques are also used to determine the combined mass of the charm quark pair, with much higher precision. This helps in locating and identifying a peak at the Higgs boson mass of 125 GeV, distinguished above the backgrounds, as displayed in Figure 3. 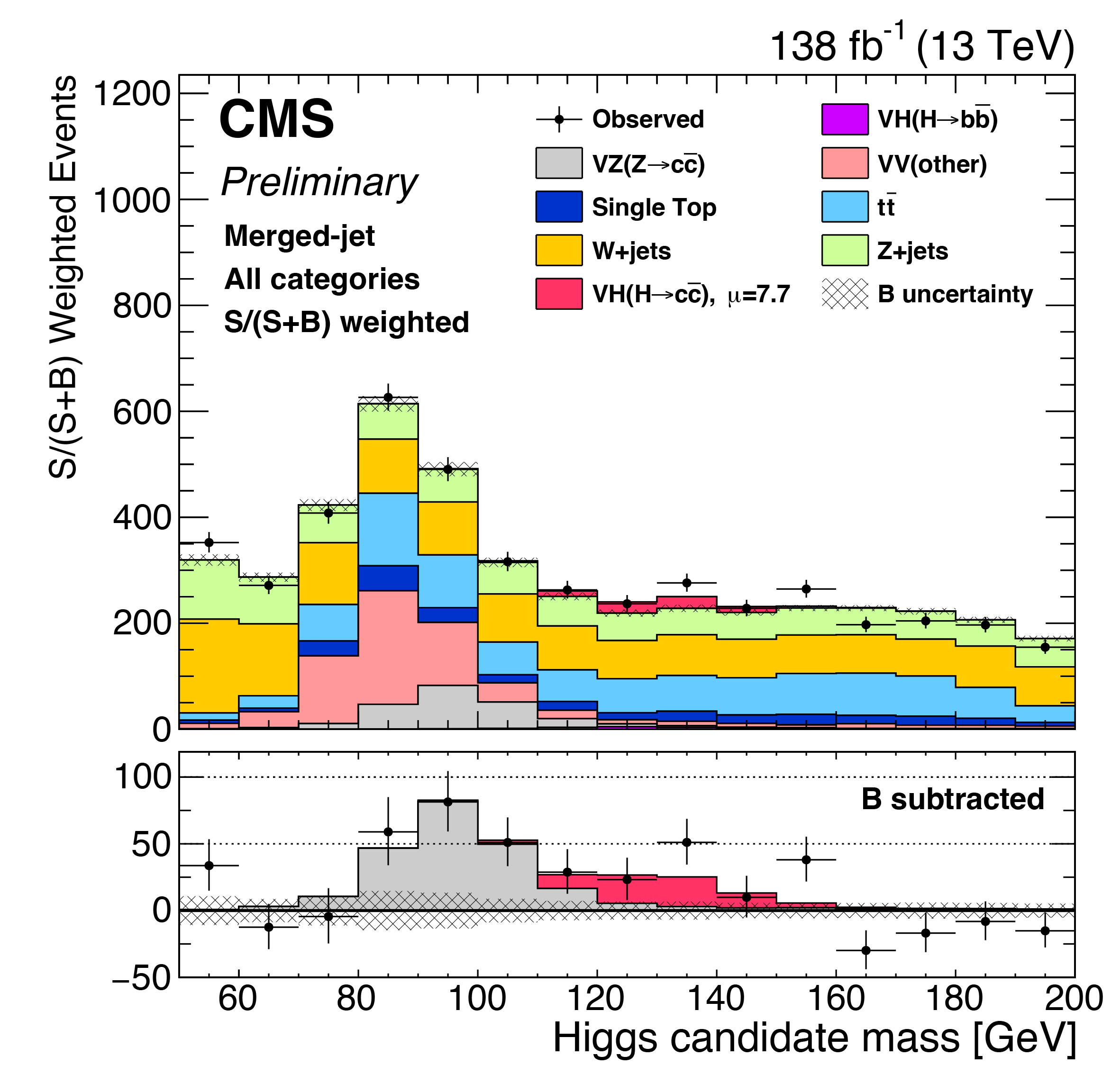 Figure 3: Distribution of the combined mass of the charm quark pair, appearing as a single merged jet, arising potentially from the decay of the Higgs boson. Experimental data (black dots with error bars) is compared with expectation from the signal and various background processes, that contributed to the selected event sample. The lower panel shows the distribution after subtracting the background contributions, except that from Z→cc (in grey) process which acts as a candle for recognizing well the excess of events due to H→cc decay (in red).

In summary, two complementary approaches have been combined to obtain the rate of H→cc decay and extract the strength of the Higgs-charm coupling. Thanks to the advances in the charm quark identification algorithms and the innovative usages of deep learning techniques, this measurement yields the world's most stringent constraint on the coupling between the Higgs boson and the charm quark. The result improves over the previous CMS measurement by more than a factor of five. As a bonus, the same method also allowed the measurement of a very similar but less rare process, Z→cc, leading to its first observation at a hadron collider! This is indicated by the grey area, while the expectation of H→cc is represented by the red area in Figure 3.