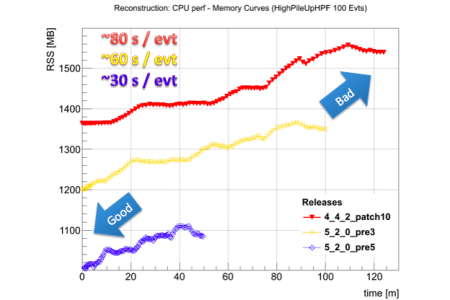 A new year with new energy and new luminosities: 2012 holds the promise to close the question on the existence (or absence) of a Standard Model Higgs boson.

Besides the obvious challenges posed by the LHC restart at a higher energy and a much increased luminosity on 5th April requiring us to sharpen our physics analysis blades, there are many other activities that are easy to gloss over when, because of them, the data quality is so high and the analysis a pleasure: I refer to the recommissioning of the experiment after a few months of intermittent activity interspersed with multiple changes, upgrades and updates.

Although we strive to “not fix what is not broken”, for each lesson that we learned last year — in some cases not more than six months ago — we have made some improvement this year. Every component, from the front-end electronics to the High-Level Trigger (HLT) farm, has been improved with the aim of increased resilience, reliability and performance.

One example is the implementation of a hardware and software scheme to recover from small issues that affect the electronics in the experimental cavern. Through a series of concerted actions, each sub-detector can now detect its own problems, signal them and then perform surgical actions instead of time-consuming blanket reconfigurations, as in the past.

Another example is the newly expanded HLT farm and improved software algorithms that will allow CMS to take a better (longer) look at the much busier events with more than 30 proton-proton collisions taking place. This was achieved through a combination of additional CPU power, updated Linux distribution (kernel, compilers, etc.) and several algorithmic changes to the reconstruction software.

Finally, an example intimately connected to the physics: the installation of two new laser light sources to follow the response of the electromagnetic calorimeter with a precision of 0.1%. This is a crucial ingredient in the search for the SM Higgs boson decaying into two photons and will be a bigger challenge with the 2012 increased luminosity regime — and consequently larger irradiation and transparency changes. But not only do the new light sources imply changes in other parts of the experiment, like the trigger system that eventually fires the light or the physical layout of some rooms in the service cavern, it also allows to establish a path to running beyond the first Long Shutdown, into 2014.

In the lead up to the first collisions of 2012, though there was a lot of on-going work and Point 5 was buzzing like a beehive, not all target this year’s “check mate” on the SM Higgs boson. A large fraction were also “last stop” tests and proofs of concept for what can be achieved with the LHC running at 14 TeV.