The search for microscopic black holes, as of March 2012 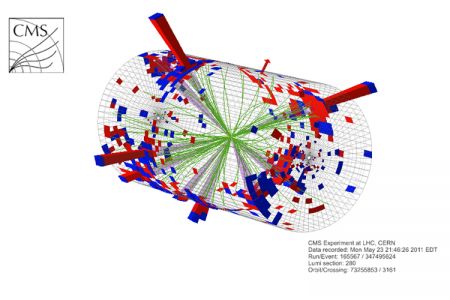 The search for microscopic black holes at the LHC is motivated by the hierarchy problem — the huge observed difference between the strengths of the electroweak and gravitational forces. The ADD model (Arkani-Hamed, Dimopoulos, and Dvali) offers an explanation by introducing extra dimensions of space beyond the usual three: Only gravity “feels” these extra dimensions in space, while all other interactions (electromagnetism, strong and weak forces) are constrained to a 3D slice (or “brane”) of a multi-dimensional Universe. This effectively dilutes the gravitational force and makes it appear weaker to an observer who “lives” on a 3D brane. One consequence of such large (compared to Planck scale) extra dimensions is that when two particles approach each other very closely in a high-energy collision they could feel the full strength of gravity in the extra dimensions, which may be sufficient for them to form a microscopic back hole.

If such black holes were to be created, they would decay immediately. The lifetime for such tiny black holes is calculated to be around 10−27 seconds. The decays would contain many energetic final-state particles, and about 75% of these particles would be quarks and gluons. These quarks and gluons would then fragment into jets.

This analysis extends a previous search (Refer to http://cmsexperiment.web.cern.ch/news/search-microscopic-black-hole-signatures-large-hadron-collider and Phys. Lett. B 697 (2011) 434) carried out by the CMS experiment. These results are based on 4.7 fb−1 (inverse femtobarns), the full 2011 data sample. The analysis incorporated searches for a broad range of black hole models, including semi-classical and quantum black holes, as well as even more esoteric objects, or black hole precursors called “string balls”. These models differ in many ways, such as the mass difference between the black hole and the (multi-dimensional) Planck scale, and by the number of quarks or gluons expected in the decay (two for quantum black holes, and around 5-7 particles for the other two).

The main background to the microscopic black hole decay arises from multiple jets produced via the plain-vanilla physics of quantum chromodynamics (QCD). We estimate the size of the QCD background by forming a linear sum of transverse momenta of all reconstructed particles in the final state and the missing transverse energy in an event (a variable called ST ) and noting that for QCD events it does not depend on the number of jets from the decay. This novel method developed by CMS, is now used by other experiments, e.g. ATLAS, for QCD background predictions in multi-particle final states.

The ST distributions from data are examined for deviations from the predictions of the Standard Model (SM), which would be an indication of black hole production. We find no such deviations, and proceed to set limits on minimum masses of black holes. We find that microscopic black holes would have to have masses above 3.8 to 5.3 TeV, depending on the model in consideration. These limits are about 0.5–0.8 TeV higher than those from our previous search; we are ruling out more massive black holes. Note that this analysis also sets strict model-independent limits on events with a large number of energetic jets in them. These limits, on production rates of events with multiple energetic jets, will help other analyses that probe models of new physics that decay to many jets. These production rate limits approach 0.6 fb (femtobarns) at large values of ST, an improvement of two orders of magnitude over our previous published result.

— Submitted by Alexey Ferapontov, with contributions from Amitabh Lath and Greg Landsberg