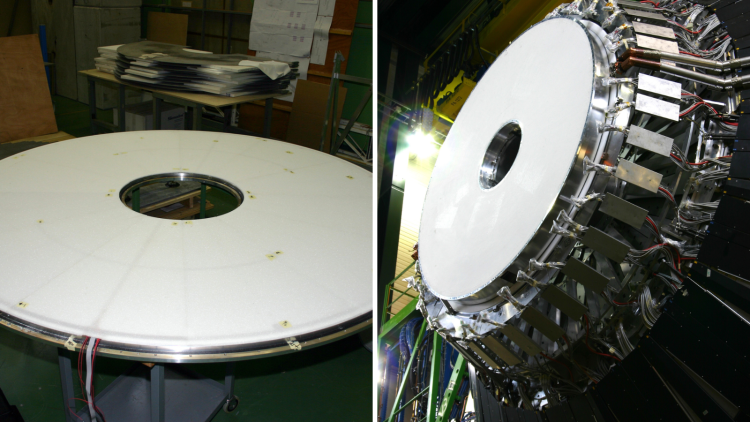 ECAL Preshower before and after installation. Credits: CERN

One way the Higgs boson might decay is into high-energy photons and detecting them is one of the ECAL’s primary functions. However, short-lived particles called neutral pions, also produced in collisions, can inadvertently mimic high-energy photons when they decay into two closely-spaced lower energy photons that the ECAL picks up together.

In the endcap regions, where the angle between the two emerging photons from the decay of a neutral pion is likely to be small enough to cause this problem, a preshower detector sits in front of the ECAL to prevent such false signals. The preshower has a much finer granularity than the ECAL with detector strips 2 mm wide, compared to the 3 cm-wide ECAL crystals, and can measure each of the pion-produced particles as a separate photon.

The preshower is made of two planes of lead followed by silicon sensors, similar to those used in the CMS tracker. When a photon passes through the lead layer it causes an electromagnetic shower, containing electron-positron pairs, which the silicon sensors then detect and measure. From this we get a measure of the photon’s energy, while having two detector layers gives us two measurements, allowing us to pinpoint the particle’s position.

When seemingly high-energy photons are then found in the ECAL, we can extrapolate their paths back to the centre of the collision and look for their “hits” in the preshower along the way, adding the energy deposited there to the total energy from the ECAL, and deducing if they really were individual high-energy photons or photon pairs.

Each endcap preshower uses 8 square metres of silicon (a material especially chosen for its accuracy, compactness, ability to deal with radiation, and easiness to handle). The silicon sensors, each measuring about 6.3cm x 6.3cm x 0.3mm and divided into 32 strips, are arranged in a grid in the endcaps to form an approximately circular shape covering most of the area of the crystal endcap. For optimal performance during the lifetime of the experiment, as in the tracker, the silicon detectors must be kept at a temperature of between -10oC and -15oC. However, the nearby ECAL is very sensitive and must be kept within precisely 0.1oC of its (higher) optimal temperature. The preshower must therefore be cold on the inside but warm on the outside, achieved using both heating and cooling systems.

The complete preshower system forms a disc, about 2.5m in circumference with a 50cm diameter hole in the middle (through which the beam pipe passes). This disc is only 20cm thick but manages to squeeze inside two layers of lead, two layers of sensors (and their electronics) as well as the cooling and heating systems – another example of the “compact” nature of CMS.