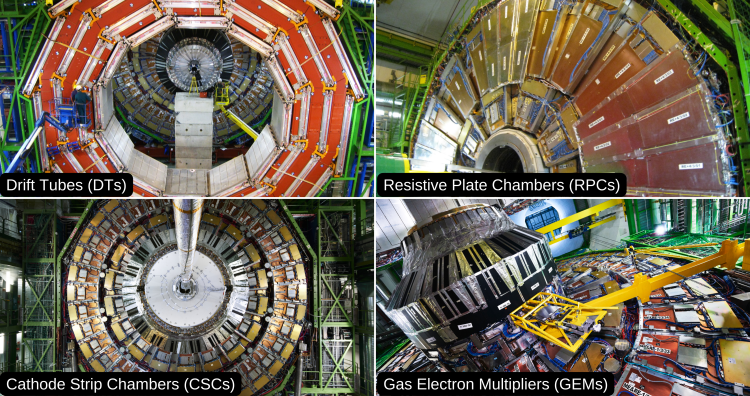 As the name “Compact Muon Solenoid” suggests, detecting muons is one of the most important tasks of CMS. Muons are charged particles that are just like electrons and positrons, but 200 times heavier. We expect them to be produced in the decay of a number of potential new particles; for instance, one of the clearest "signatures" of the Higgs Boson is its decay into four muons.

Because muons can penetrate several metres of material losing little energy, unlike most particles, they are not stopped by any of CMS calorimeters. Therefore, chambers to detect muons are placed in the outer part of the experiment where they are the only particles likely to produce a clear signal.

A particle is measured by fitting a curve to the hits registered in the four muon stations, which are located outside of the magnet coil, interleaved with iron "return yoke" plates. The particle path is measured by tracking its position through the multiple active layers of each station; for improved precision, this information is combined with the CMS silicon tracker measurements. Measuring the trajectory provides a measurement of particle momentum. Indeed, the strong magnetic field generated by the CMS solenoid bends the particle's trajectory, with a bending radius that depends on its momentum: the more straight the track, the higher the momentum.

In total there are 1400 muon chambers: 250 drift tubes (DTs) and 540 cathode strip chambers (CSCs) track the particle positions and provide a trigger, while 610 resistive plate chambers (RPCs) and 72 gas electron multiplier chambers (GEMs) form a redundant trigger system, which quickly decides to keep or discard the acquired muon data. Because of the many layers of detector and different specialities of each type, the system is naturally robust and able to filter out background noise.

A muon, in the plane perpendicular to the LHC beams, leaves a curved trajectory in four layers of  muon detectors ("stations")

DTs and square-shaped RPCs are arranged in concentric cylinders around the beam line (‘the barrel region’), whilst CSCs, trapezoidal RPCs, and GEMs form the ‘endcap’ disks that “close” the ends of the barrel.

Most of the muon chambers  were built in different laboratories around the world before being shipped all the way to CERN, so the chambers needed to be robust as they are meant to act as precision detectors. Their mechanical robustness and performance was extensively tested in several phases of prototyping, design, test beams, assembly and commissioning, both at the respective labs and at CERN.

As a demonstration of their robustness, when physicists overseeing the beam test decided to reposition a chamber, one side of its support structure suddenly fell by more than 30 cm. Such an unprecedented test of robustness had the physicists worry about the fate of that unlucky chamber. Instead, they found it was still "taking data" in spite of its hard drop.