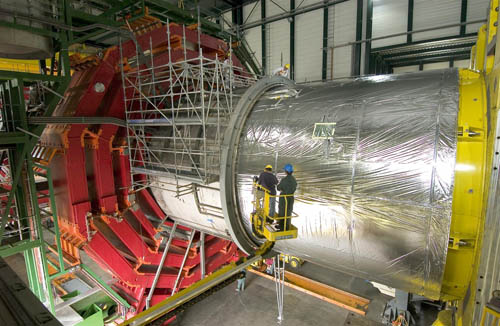 The CMS magnet during CMS construction.

The CMS magnet is the central device around which the experiment is built, with a 4 Tesla magnetic field that is 100,000 times stronger than the Earth’s.

Its job is to bend the paths of particles emerging from high-energy collisions in the LHC. The more momentum a particle has the less its path is curved by the magnetic field, so tracing its path gives a measure of momentum. CMS began with the aim of having the strongest magnet possible because a higher strength field bends paths more and, combined with high-precision position measurements in the tracker and muon detectors, this allows accurate measurement of the momentum of even high-energy particles.

The CMS magnet is a “solenoid” - a magnet made of coils of wire that produce a uniform magnetic field when electricity flows through them. The CMS magnet is “superconducting”, allowing electricity to flow without resistance and creating a powerful magnetic field. In fact at ordinary temperatures the strongest possible magnet has only half the strength of the CMS solenoid.

The tracker and calorimeter detectors (ECAL and HCAL) fit snugly inside the magnet coil whilst the muon detectors are interleaved with a 12-sided iron structure that surrounds the magnet coils and contains and guides the field. Made up of three layers this “return yoke” reaches out 14 metres in diameter and also acts as a filter, allowing through only muons and weakly interacting particles such as neutrinos. The enormous magnet also provides most of the experiment’s structural support, and must be very strong itself to withstand the forces of its own magnetic field.

How big can you build a magnet?

More coils give a stronger field, a stronger field gives more precise results, and with more precise results we can spot more physics. But whilst getting the best magnetic field possible was the most important consideration in designing the detector, its size was also limited. For the sake of efficiency the magnet was to be built offsite and transported to CMS by road, which meant it physically could not be more than 7 metres in diameter, else it would not fit through the streets on its way to Cessy.