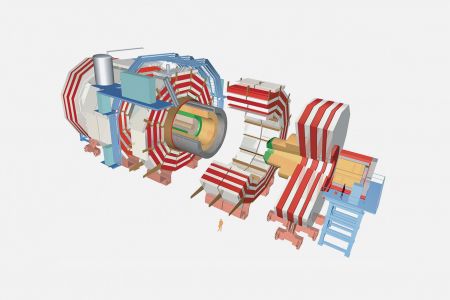 Perspective view of CMS as shown on the cover of the Letter of Intent, 1992.

The decision to employ a method that involves hoisting thousands of tonnes of expensive machinery, the result of endless hours of work, down a 100 metre gaping hole was never going to be taken lightly. But CMS’s unique method of slicing up the detector and lowering each piece into the cavern ready-made, has been nothing short of a success.

“It’s a huge amount of responsibility; you have all the physicists waiting for an element to arrive, and if you make a serious mistake, it could be the end of CMS,” says Hubert Gerwig, whose task it was to ensure each sub-detector’s safe arrival.

But lowering CMS by means of heavy lifting was a decision taken at the very beginning, some 16 years ago, inspired by experiences with LEP. “The concept of building large objects on the surface and transferring them completed to the underground area was the clear way to go,” says Alain Hervé, CMS’s original technical coordinator. Though not in LEP’s initial plans, success in lowering two pieces into position in L3, weighing 300 and 350 tonnes, suggested the method could work.

Being able to work in parallel on the civil engineering and the detectors was clearly a huge advantage, and the ‘slicing’ also meant that, through complicated loops of cable chains, water, gas and cooling leads, each piece remained accessible within the cavern, a contrast with experiments built in a ‘Russian dolls’ style, from the inside, out.

But the implications of using this method needed careful consideration too: “As soon as I saw the sketch I had a clear vision of how such an experiment had to be organized,” says Alain. “We were already two years inside LEP running, and lessons from the construction and the first shut-downs were clear to me. The way the experiment had to be sectioned and installed was the first priority, not developing the design,” says Alain.

And so the experimental area, pits and surface hall all had to be designed around the lowering method. Foundations for the gantry and a massive strong plug to hold the pieces over the shaft before the cranes took the strain were incorporated. Anchor points for lifting were integrated in the design of the yoke as well as HCAL (Hadron Calorimeter) and HF (Forward Calorimeter) platforms and cradles.

The first lowering took place in November 2006, and the last on 22 January 2008. “Everything has been calculated and calculated again, but that’s still not the real thing,” says Hubert. “In the end we were successful and nothing was damaged. So there is a sense of relief; it’s a bit like an exam, you feel better once it is over and you can celebrate!”