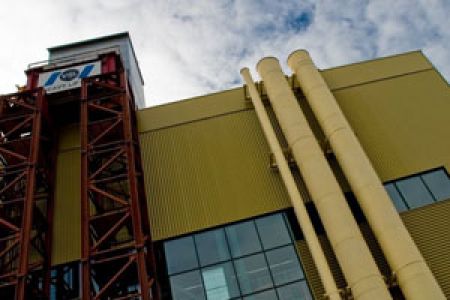 The gantry support system seen from outside the surface hall.

Trials and Tribulations of Heavy Lowering

Ten companies internationally were capable of taking on such a project as CMS, but VSL Heavy Lifting, a Swiss company, were the eventual winners of the 2 million CHF contract.

Though VSL were used to lifting such heavy loads as the 7500-tonne roof of the Airbus Assembly Hall, and the walkway between the Kuala Lumpur Twin Towers, CMS presented unique challenges. For a start, the equipment needed to lower, not lift, and a long way. Adding to this was the fact that the scientific cargo was far more delicate than its industrial counterparts.

The gantry support system was rented and made from existing towers, but the 3.4m high horizontal beam, that took the strain of the load, had to be custom made. Even such an enormous beam still bent 5cm under the weight of the heaviest element, the 2000 tonne central barrel ring known as YB0.

During each lowering, the element is supported at four points, but by many more cables as each bunch is made up of 55 individual 15.7mm diameter strands of cold-drawn steel, each with a capacity to hold 28.4 tonnes. Within each bundle, half of the strands are twisted one way and half the other to make overall turning force zero and preventing any turning of the load during the descent.

The lowering in fact happens in 200 small steps as the cables are fed through the hydraulic system half a metre at a time. This works on a grip and release basis, similar to your own hands lowering a bucket down a well, and at all times the load is safely supported by one or other of the clamping mechanisms. Once the cargo reaches the ground, it comes to a soft landing on hovercraft-like airpads that take the load off the cables and later on allow easy horizontal movement within the experiment hall.

Each lowering was a big event, requiring a week’s preparation to manoeuvre the plug, element and attachments in place, and each was a success. Though there were also, of course, a few challenges that arose along the way: YB0, for instance, the largest segment to enter the cavern, at one point cleared the sides of the shaft by just 10cm either side, and the team needed surveillance video cameras to carefully monitor its movements and ensure that the element passed the bottleneck safely.

The slight slope in the CMS cavern presented another issue. Whilst unnoticeable underfoot, the 1.23% gradient meant that when one side of any element touched down, the other still had 3cm to go. “Initially we tried to compensate for the slope, so that there was an even landing,” explains Hubert Gerwig, the engineer in charge of heavy lifting, “but soon we realised it wasn’t necessary because under the load, the metal strands actually elongate by 10cm, making them somewhat elastic.” The elasticity meant they could simply carry on lowering the piece until both ends were on the ground, also giving rise to the slight “bouncing” effect visible as each piece finally came to rest on the experiment hall floor.

That some of the elements couldn’t be supported on just four attachment points presented another issue and the endcap disks , for example, were instead carried down on a special crate. But being supported nine metres below their centre of gravity made them naturally unstable. The team solved this dilemma by using stabilisers at the top of the endcap such that if it tilted, it would simply lean against the lowering cables.

In the end each slice of CMS found its way to the experiment hall safely, thanks to the hard work and dedication of all involved, and the group and their equipment can now be disbanded. The VSL team will now take their gantries and hydraulic equipment to Durban in South Africa to build a stadium for the 2010 World Cup. Some parts, such as the cables that have carried down every piece of CMS, are now too fatigued to be used again. Finishing the lowering is a sad event for some, but the VSL mechanics like to travel the world and are eager to move on. “I think some of the workers get the opposite of home sickness,” says Hubert, “they cannot wait to get away again!” And we wish them good luck.