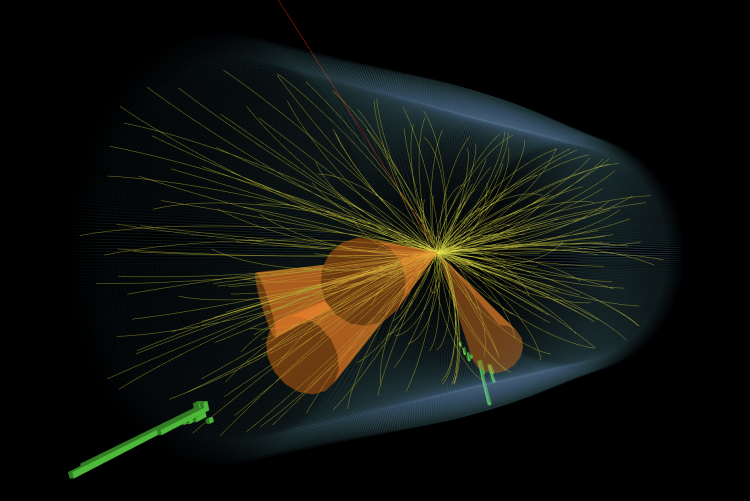 Since the Higgs boson discovery in 2012 by the CMS and the ATLAS collaborations, the interaction of the Higgs boson with other fundamental particles as well as with itself are studied with ever-increasing precision to pin down the nature of this new particle. In the standard model, the interaction of the Higgs boson is envisaged in terms of the particle-(anti)particle pair of the same flavor or type, for example, to a bottom quark-antiquark pair, a pair of Z bosons, or much extremely rarely to a pair of muons.

But if the mass of the particles were the only argument, should the top quark decay to a Higgs boson and something else? In the standard model, the top quark decays almost always to a W boson and a b quark. That decay is historically called a charged current because the W boson is a charged particle. But in principle there is also the possibility where the top quark, while interacting with the Higgs boson, converts to a quark of a different flavor (up or charm). Such a process is called a flavor-changing neutral current, since the net electric charge remains the same before and after the decay process; the Higgs boson is electrically neutral, but the flavor of the quark has changed.

Such flavor-changing neutral current interactions are actually not easily allowed in the standard model and consequently are extremely rare processes. For a top quark to decay in the way shown in Figure 1, the probability predicted by the standard model (less than hundreds of a million of a billion) is so ridiculously low that the experiments at the LHC are not expected to ever be sensitive enough. But, in contrast, many proposed extensions to the standard model, such as supersymmetry but many others as well, predict much more abundant decays of the top quark via flavor-changing neutral currents. The probability of such a process could be as high as one in a thousand decays of the top quark! With millions of top quark pairs production and various decays recorded already by the LHC experiments, looking for this possibility is within the experimental sensitivity. This was encouraging.

In a new CMS search, the top quarks in datasets gathered through 2017 and 2018 are analysed for the presence of flavor-changing neutral current decays of the above type. Since the top quark and the Higgs boson are both unstable, the most suitable combined decay pattern for the analysis was events containing a muon or an electron, missing energy from a neutrino, and several bottom quark jets. The selected events were divided into several categories to win over the backgrounds better. But that was not enough. This analysis used several machine learning techniques to reconstruct and identify the signal of top quark and the Higgs boson interaction of the rare type discussed above. A whole suite of machine learning techniques, including deep neural networks and boosted decision trees, were put into action to achieve the feat of discriminating the signal events of flavor-changing neutral current from what the standard model would predict. This is exemplified in Figure 2, where the power of the score distribution is evident. 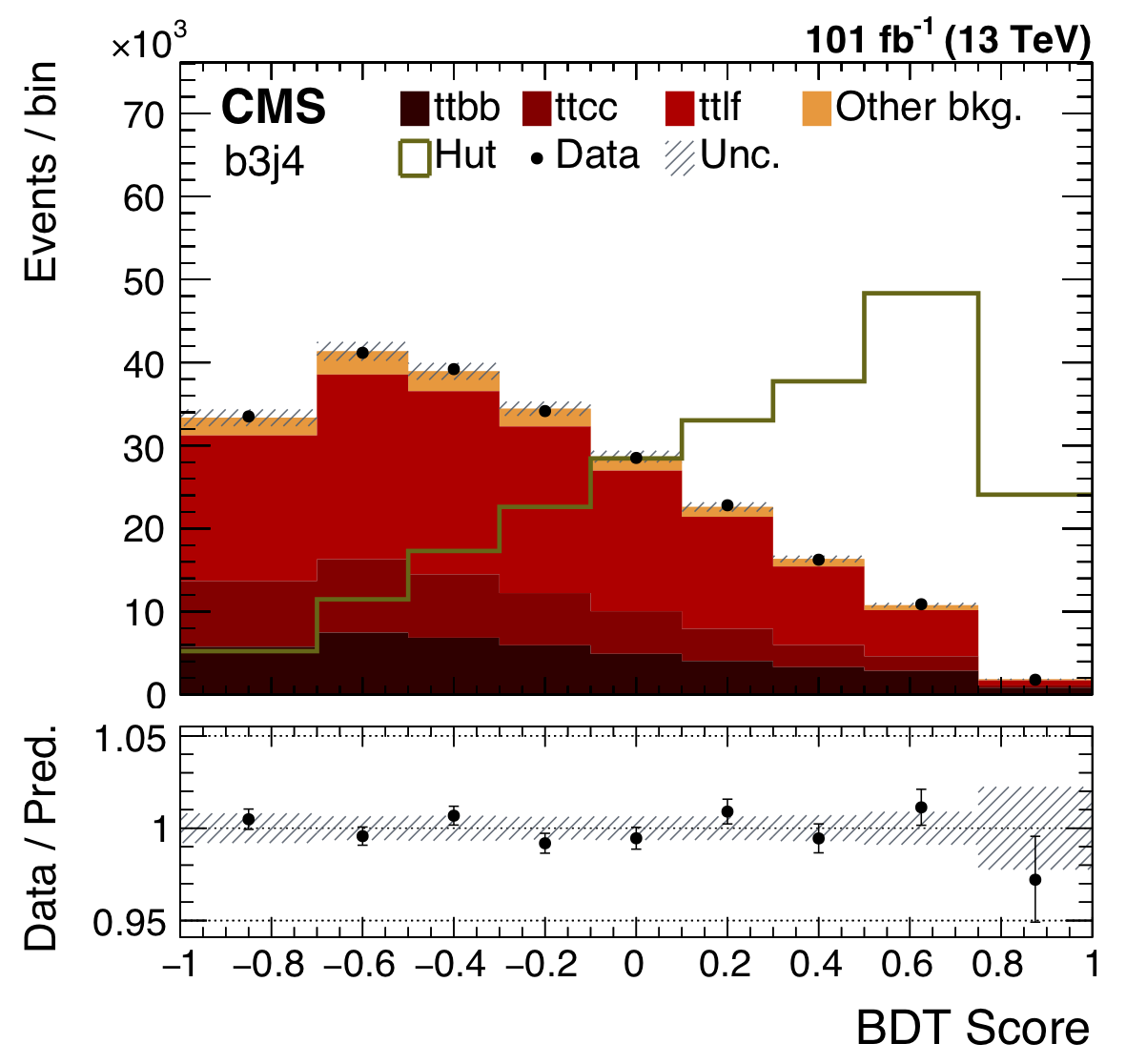 Figure 2. Boosted decision tree output distribution for top-Higgs-up interaction for the events with four or more jets where three of them are bottom quark jets (b3j4). The opaque histogram consisting of stacks of different colours stands for the standard model background and agrees with data within the uncertainty. The histogram drawn with a solid line is due to the flavor-changing neutral current interaction allowed in certain extensions of the standard model; data does not match with such scenarios.

In the end, the data do not show significant differences from the standard model prediction. After taking into account various uncertainties in the measurements, the maximum probabilities are derived to be 0.079% and 0.094% for the Higgs-up-top and Higgs-charm-top interactions, respectively which are already close to some of the more optimistic predictions.

In a different but similar study, scientists in the CMS collaboration concentrated on the Higgs boson decays to a pair of photons, rather than a pair of bottom quarks as in the above. Though the decay of the Higgs boson to photons is exceedingly rare amounting to only about 0.2% of the total, experimentally it is golden in terms of backgrounds, precision of measurements etc.. This is illustrated in Figure 3, where the presence of Higgs boson is readily established by the excess or peak in the distribution of the two-photon mass; the uncorrelated photon pairs, not coming form the decay of the Higgs boson, produce a smoothly falling distribution. 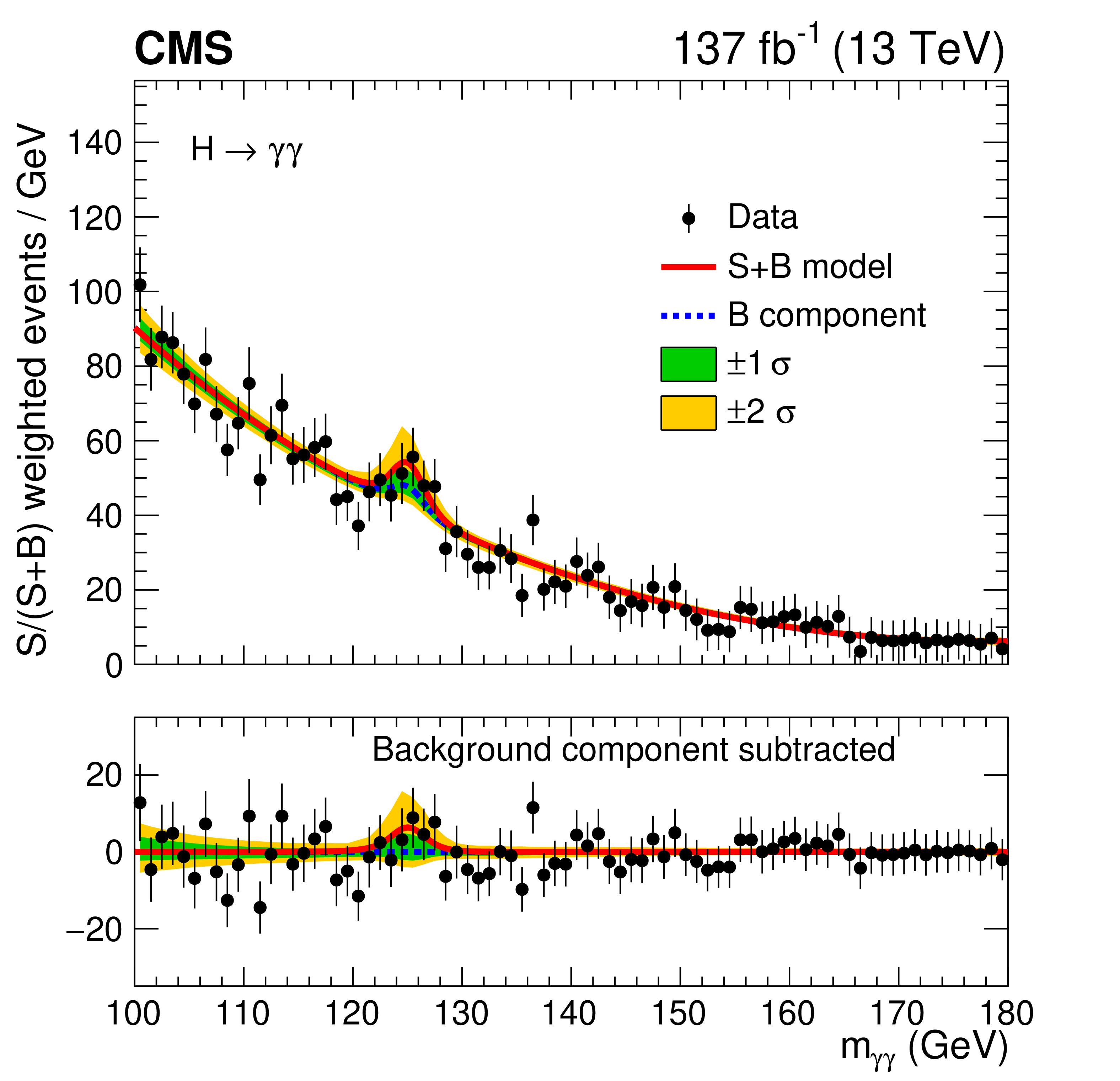 Again, the multivariate analysis techniques came to the rescue in the process of identification of possible signatures for flavor-changing neutral currents. Unfortunately though, there was no sign of the wanted interactions! This translated into the maximum limits of 0.019% and 0.073% on the chances of Higgs-up-top and Higgs-charm-top interactions, respectively. These are currently the strictest experimental limits to date on these quantities.

Still, it is not yet time to give up hope for catching such processes in the LHC experiments. During the next two decades the LHC will have several data-taking periods with the next one starting in 2022; the total data volume will be almost 25 times the currently accumulated amount. That will allow definitely to search for even more rare interactions between the top quark and the Higgs boson; and who knows!