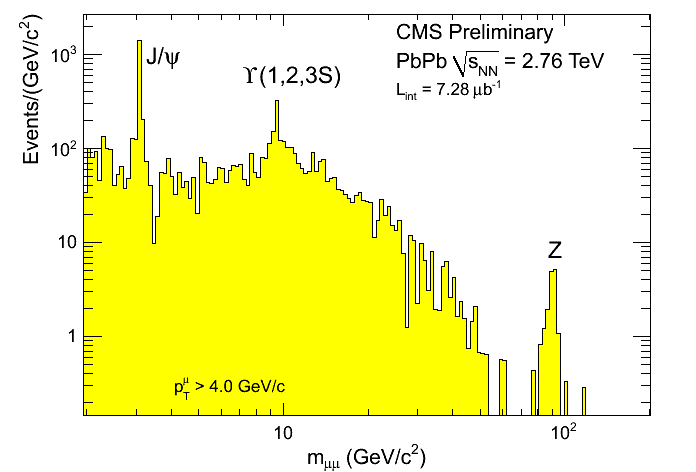 The CMS experiment has made several unique measurements using data from LHC collisions of lead nuclei (PbPb, November 2010) at centre-of-mass energies of 2.76 TeV per nucleon pair.

The CMS results include the comparison of the production rates of various particles including strongly-interacting heavy-quark bound states, energetic light-quark and gluon jets, and heavy-quark jets as well as weakly-interacting particles such as prompt photons, which are produced directly from the interaction of quarks rather than in particle decays, and W and Z bosons.

The Υ (Upsilon) particle, a quarkonium consisting of a bottom and an anti-bottom quark, exists in three states known as 1S, 2S and 3S, in decreasing order of how tightly the quarks are bound. (1S is the ground state of the Υ, while the others are excited states.) Because they are more loosely bound, the 2S and 3S states will melt more readily in the QGP. This means that the number of Υ(2S) and Υ(3S) particles produced relative to Υ(1S) in heavy-ion collisions should be less than corresponding numbers from proton collisions.

The properties of the medium in PbPb and pp collisions have been investigated via measurements of the total hadron multiplicity, transverse energy densities, and angular correlations between particles in high-multiplicity events.

All these data provide unprecedented insights into the nature of strongly-interacting matter at the highest energy densities ever studied in the laboratory. First estimates show that the energy density is more than three times that obtained at the RHIC collider at the Brookhaven laboratory in the USA.

CMS has unparalleled muon detection and measurement capabilities that make it possible to measure precisely J/Ψ and Υ "quarkonia" mesons, through their decays to a pair of muons. Such quarkonia states are expected to "melt" in the QGP medium at temperatures that depend on how tightly the quark-antiquark pair is bound.

CMS measured the charm-anticharm state, J/Ψ, and the bottom-antibottom Υ family and observed for the first time ever that the excited, loosely-bound Υ states disappear relative to the more tightly-bound ground-state Υ.

CMS was also able to separate the J/Ψs produced by b-quark decays from those produced in the PbPb collision itself. In both cases production appears to be suppressed, pointing to the “melting” of J/Ψ in the QGP medium. A first measurement of energetic b-quark quenching in the QGP medium was also made.

Following a previous measurement of a di-jet imbalance in December 2010 [arXiv:1102.1957], jets have been extensively studied. CMS measured the spectrum of charged hadrons and prompt photons up to 100 and 80 GeV/c respectively. On the one hand, the observed suppression of charged hadrons in the medium extends to much higher momenta — the RHIC experiments observed it at lower energies of up to 20 GeV/c. The CMS observation provides strong constraints on models of parton (quark or gluon) energy loss in the QGP. On the other hand, isolated photons as well as Z bosons [PRL to appear soon], which do not interact strongly, appear to be unaffected by the QGP medium.

CMS has also been able to measure for the first time the parton "fragmentation functions" in PbPb collisions, by correlating single particles to fully reconstructed jets. This provides detailed information on how energetic partons fragment into hadrons within and beyond the QGP medium.

Other studies carried out include: the azimuthal anisotropy (elliptic flow) of the produced hadrons, a quantity that is sensitive to the viscosity of the QGP; the total hadron multiplicity and transverse energy densities (reaching about 2 TeV per unit of rapidity, which is almost 4 times higher than that measured at RHIC); as well as long-range angular correlations of the produced particles — an effect that was also observed by CMS in pp collisions [JHEP 1009 (2010) 091] — indicative of strong collective flows present in the final-state of the system.

The richness of the new physics studies opened-up by the high-energy and high-rate heavy ion collisions provided by the LHC is being fully exploited by the CMS detector. This is just the beginning of a long and fruitful voyage at the frontier of particle physics.