Searching for the Dark Side of the Universe

“I’m just trying to make my way in the dark universe.”

Could you imagine what the dark part of the universe is like?

The Standard Model of Particle Physics explains matter at the subatomic level and the related phenomena such as interactions and forces between the subatomic particles. Still, we already know that a new form of matter, Dark Matter, does exist in our universe. In fact, this Dark Matter, which is not visible to us via electromagnetic radiation, constitutes almost 27% of the total energy in the universe and about 85% of the total mass. Even more, it is likely that there are new undiscovered particles that can connect the Standard Model with the Dark Matter (the dark side) of Particle Physics.

The evidence for the existence of Dark Matter, from astrophysical and cosmological observations, is only based on gravitational interactions. Whether Dark Matter is able to interact with Standard Model particles is still one of the major mysteries in physics. There are many models of dark matter in particle physics which envisage it in the form of particles that experience only the two weakest forces in nature: gravity and the weak interaction. Such a hypothetical particle is called a WIMP, a weakly interacting massive particle.

You also might have already heard about the Higgs boson, right? In the dark sector of Particle Physics we may have a counterpart dark Higgs boson. Just like the normal Higgs boson, this particle is connected to the mechanism that gives mass to the Dark Matter particles. If the mass of the Dark Higgs is light enough, lighter than Dark Matter particles, the observed abundance of dark matter in the universe is reproduced.

The current available energy in the proton-proton collisions at the LHC may be sufficient to produce these types of particles. This means experiments at the LHC can be a real explorer of the dark side!

A recent result from the CMS experiment looks for the production of these dark Higgs bosons together with a pair of Dark Matter particles. Since the Dark Matter particles have only a tiny interaction with ordinary matter, they escape detection in the experiment as happens in the case of neutrinos. But we are still able to search for the dark Higgs boson using one of the possible decays of a typical Higgs boson: to a pair of W bosons.

Since the mass of the W boson is about 80 GeV (remember in the parlance of particle physics, mass of proton is almost 1 GeV), this particular decay becomes dominant for dark Higgs boson masses above 160 GeV. The W bosons are detected in the CMS experiment via their decay to an electron or a muon. The undetectable Dark Matter particles do carry energy too, and produce the so-called missing transverse momentum in the experiment. An imbalance of momentum in the transverse direction between initial and final states is a classic signature of particles which escape detection, such as neutrinos but also other undetectable particles including these Dark Matter particles.

Figure 1. Interactive event display (try zooming/rotating!) of a particle collision recorded in the CMS detector, where the initial particle collision happens in the center of the image, with a pair of high energy charged leptons (a muon in red, and an electron in green on the left side of the image) and significant transverse momentum imbalance (pink arrow on the right side of the image), that points in the direction where undetected particles might have gone. You can also check out this display on a separate page!

The experimental challenge lies in the fact that in proton collisions, many other Standard Model particles with similar final decay products mimic the signal. These collisions are called background. The most important backgrounds arise from collisions with a pair of W bosons in the final state, such as the Standard Model Higgs boson, the non-resonant Standard Model di-boson W+W- and the top quark pairs (almost 99% of the time each top quark decays to a W boson and a bottom quark). We have to dig deep inside the collected data to try to identify which events could have Dark Matter particles in them. We can only claim the observation of dark matter if there is a significant amount of signal events after all such backgrounds are removed. 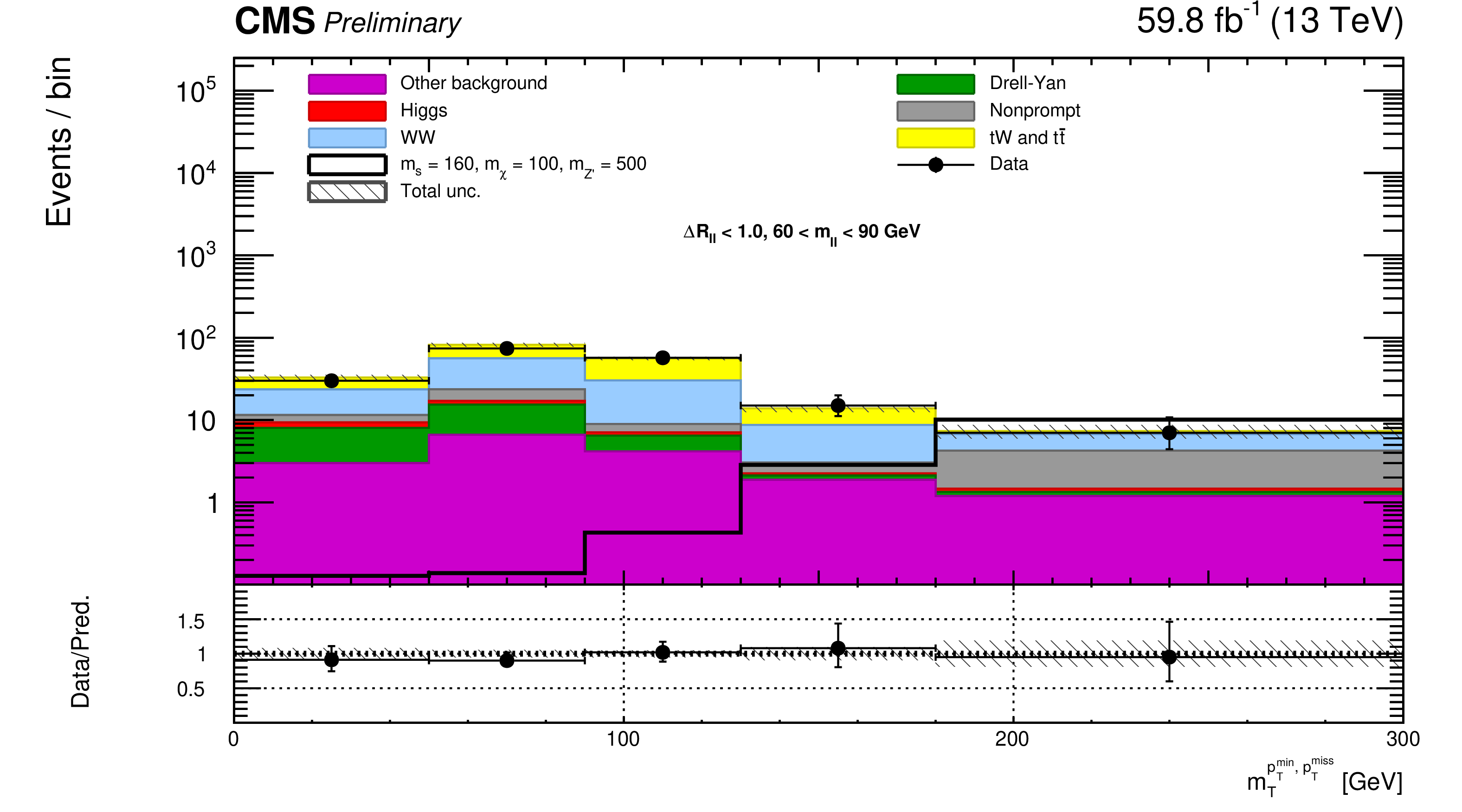 Figure 2: Comparison between background prediction (colorful shapes) and data (black markers). The figure shows data taken in 2018. The points show the ratio of data to our final background prediction in the bottom panel, and the grey shade is the uncertainty. The data agree very well with the background distribution predicted, which implies no significant production of dark matter particles.

A comparison of our predicted background and the data we measure in collisions is shown in Figure 2. We find that our prediction agrees very well with the data, so there is no excess of events corresponding to our signal which means that Dark Higgs particle production followed by the type of decay searched for, did not happen in the experiment. That could mean that no dark matter is produced at the LHC at all, or just that it happens too rarely for us to detect it yet. In effect, this analysis rules out some of the hypothetical scenarios about the nature of the Dark Higgs.

But that is not all, in 2022 a new period of the LHC data-taking will start, allowing us to explore deeper the dark side and, who knows, find a new hint on the nature of Dark Matter.

Stay tuned and be with the dark side.