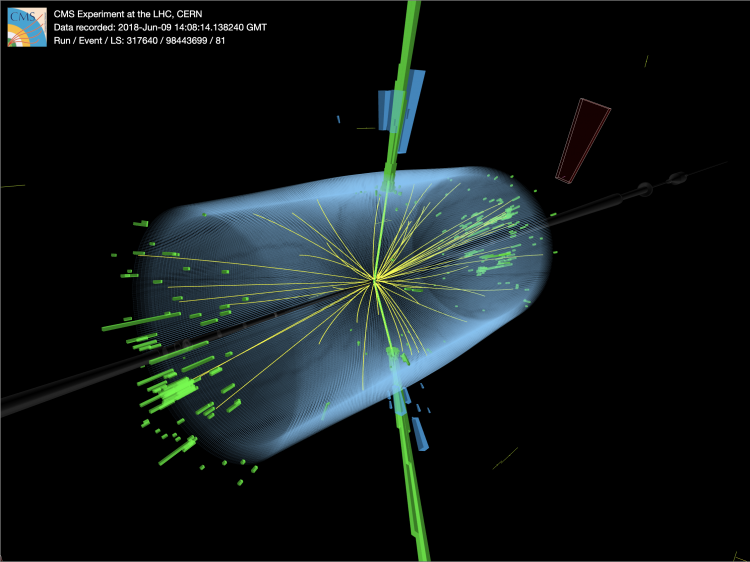 Are there more fundamental particles than the ones we currently know? Do we live in a Universe with additional spatial dimensions? These hypotheses are among the many ideas that have been suggested to explain how to unify the electroweak and strong interaction or how to describe gravity at the subatomic scale. While there are many different ideas for new physics beyond the standard model, many of them have one thing in common: they predict new phenomena in the proton-proton collisions at the LHC that result in the production of pairs of very energetic electrons or muons.

We search for new physics in collision events recorded by the CMS experiment from 2016-2018, where two leptons with very high momenta are produced. The pair of two electrons or two muons (generically called dilepton pair) is used to infer the mass of the hypothetical particle from which they would have decayed. We then study the dilepton mass spectrum looking for deviations from the standard model expectation.

The aforementioned new physics theories could alter the mass distribution in two ways: If a new particle exists that decays directly into two leptons, we expect to observe a narrow peak in the distribution, which we call a resonance. Other models instead predict a broad, nonresonant, excess or even a deficit of events with respect to the background prediction from known standard model processes.

We build on a long history of discovering new particles in dilepton final states with this search. Some examples of this include the J/ψ meson discovered in 1974 at SLAC and BNL, the Y meson discovered in 1977 at Fermilab and the Z boson discovered in 1983 at CERN. What were rare new particles decades ago are now produced in large numbers at the LHC. This is highlighted in Figure 1, which shows the dimuon mass spectrum observed by CMS with peaks in the distribution corresponding to resonantly produced particles. With our search, we push far into the unexplored high mass region of this distribution in the hopes of again discovering something new.

Figure 1: Animation showing the dimuon spectrum and highlighting some of the discoveries made over the years.

For our search, we rely on the ability of CMS to accurately and efficiently detect and reconstruct electrons and muons with energies and momenta higher than ever seen before in a collider experiment. This presents us with challenging tasks all the way from the calibration of the detector and the development of reconstruction and identification algorithms to the monitoring of their performance. How these challenges have been tackled for muons was discussed in a previous physics briefing.

With the sizeable dataset delivered by the LHC at the high collision energy of 13 TeV, our search can probe the dimuon and dielectron mass spectra out to the highest masses to date. To judge whether hints of new phenomena are present in our data, we have to compare them to the expectation we have from known standard model processes, which constitute the background to the signals we are hoping to observe. We mainly use simulated events to obtain the expected mass spectra from the different backgrounds that the standard model predicts. The dominant source of background comes from the dielectron or dimuon decay of a photon or standard model Z boson, whose production at hadron colliders such as the LHC is also known as the Drell-Yan process.

The mass spectra we observe are shown in Figure 2, where they are compared to the background expectation. We do not observe any significant deviation of the data from the background that would be a hint of new phenomena. 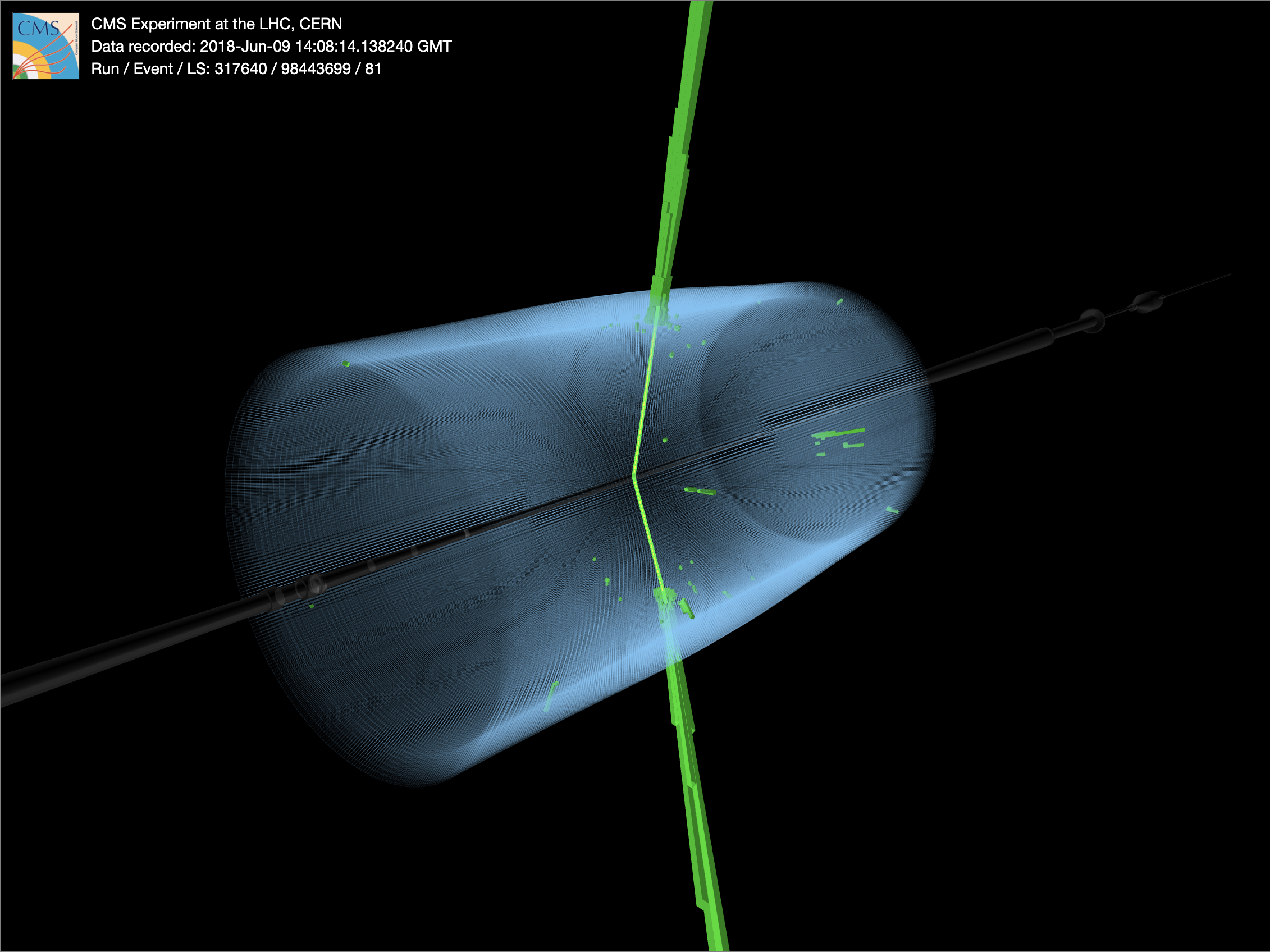 Figure 3: Highest dielectron mass candidate found in the Run 2 dataset, corresponding to a mass of 3.47 TeV. All particles besides electrons and their energy deposits have been removed. Electrons are shown as green lines in the tracker detector and green blocks for the electromagnetic calorimeter. 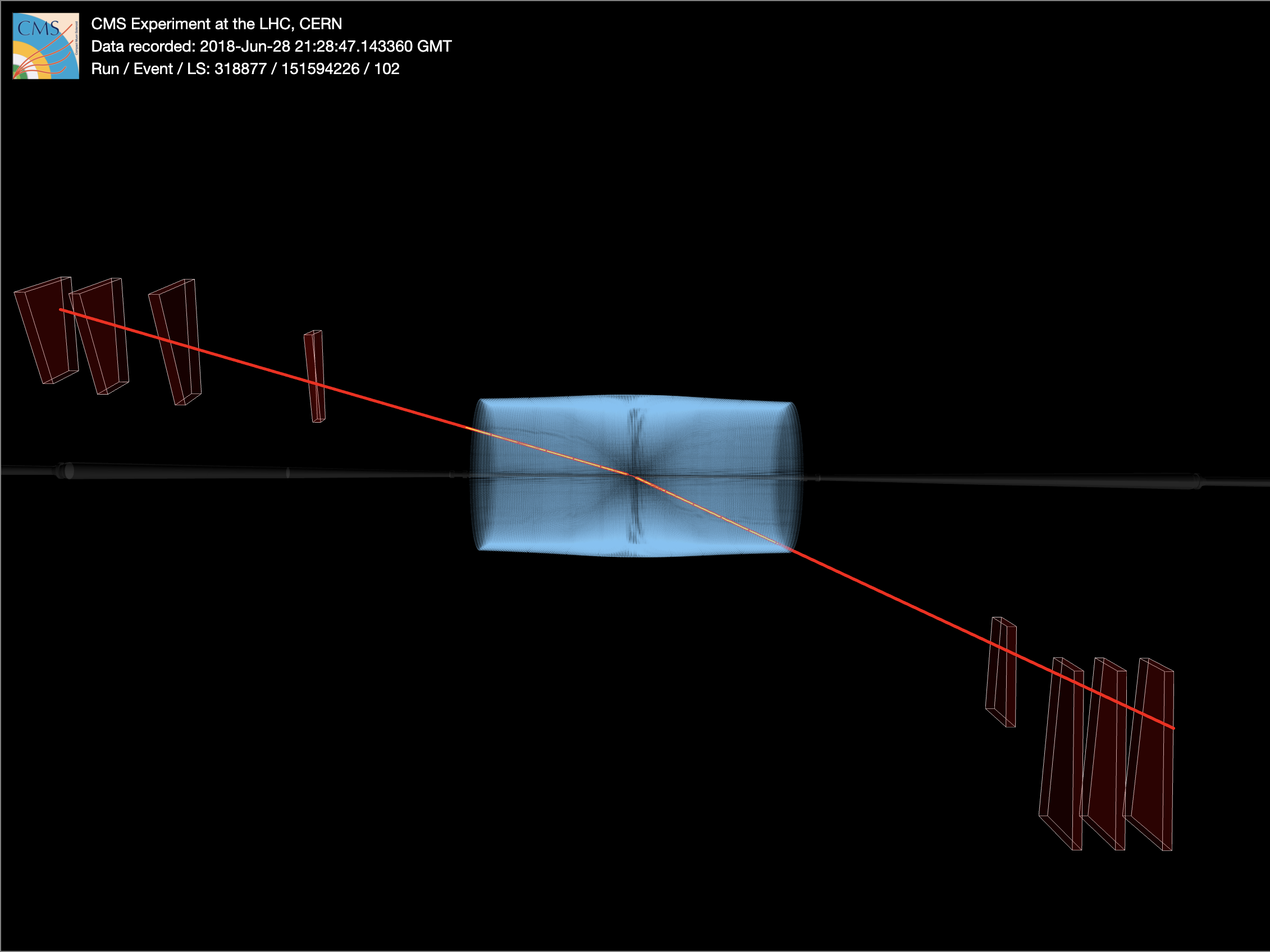 Figure 4: Highest dimuon mass candidate found in the Run 2 dataset, corresponding to a mass of 3.34 TeV. All particles besides muons and their energy deposits have been removed. Muon trajectories are shown as red lines.

The mass of the two leptons is not necessarily the only distinguishing factor between standard model processes (backgrounds) and our potential signals. Depending on the signal model, the spatial distribution of the leptons can differ significantly from that of the standard model backgrounds. One quantity sensitive to such effects is the scattering angle θ* (theta-star). For processes where a quark-antiquark pair annihilated into a dilepton pair, it is measured as the polar angle between the flight direction of the negatively charged lepton and the quark. In Figure 5, the distribution of the cosine of θ* is shown for the Drell-Yan background and several signal models. For the background, the events are concentrated at positive values of cosine θ*, while for some of the signal models the distribution looks quite different. By focusing on those events with a cosine θ* < 0, we can enhance the signal over the background and thereby the sensitivity of the search to these types of models. 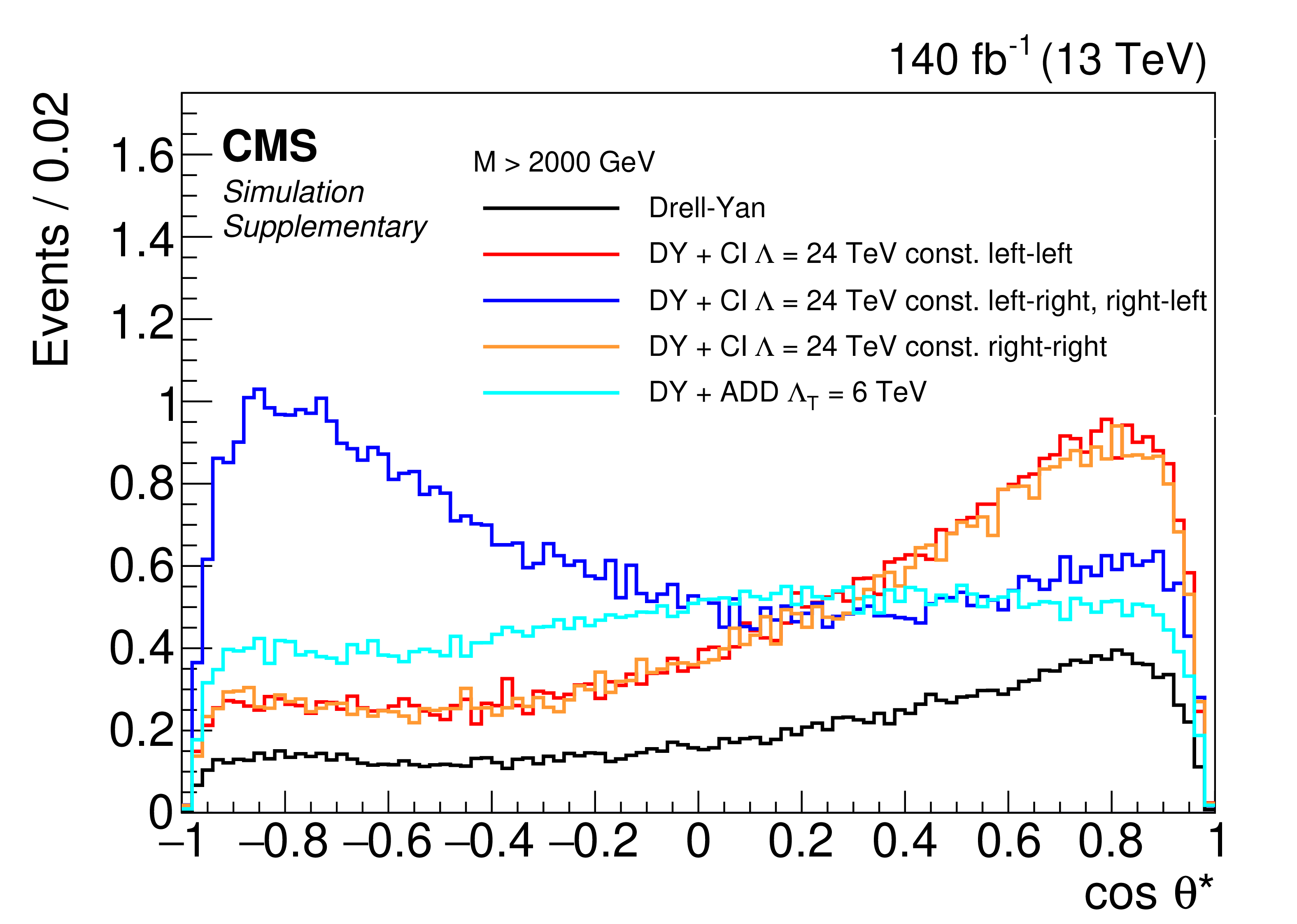 Figure 5: The distribution of the cosine of the scattering angle θ* for events with dilepton mass above 2000 GeV. The dominant Drell-Yan background is shown in black, whereas the distribution expected in different signals is shown in other colors.

One of the rules of the standard model is that bosons such as the Z boson will decay equally into muons and electrons. But if the standard model is incomplete, the data could show a preference for one type of lepton over the other. We searched for this at high masses for the first time! Unfortunately, we didn’t see strong evidence of any preference (although there were some small deviations due to an excess of electron events, which we should keep an eye on in the future). Figure 6 shows the ratio we observed. 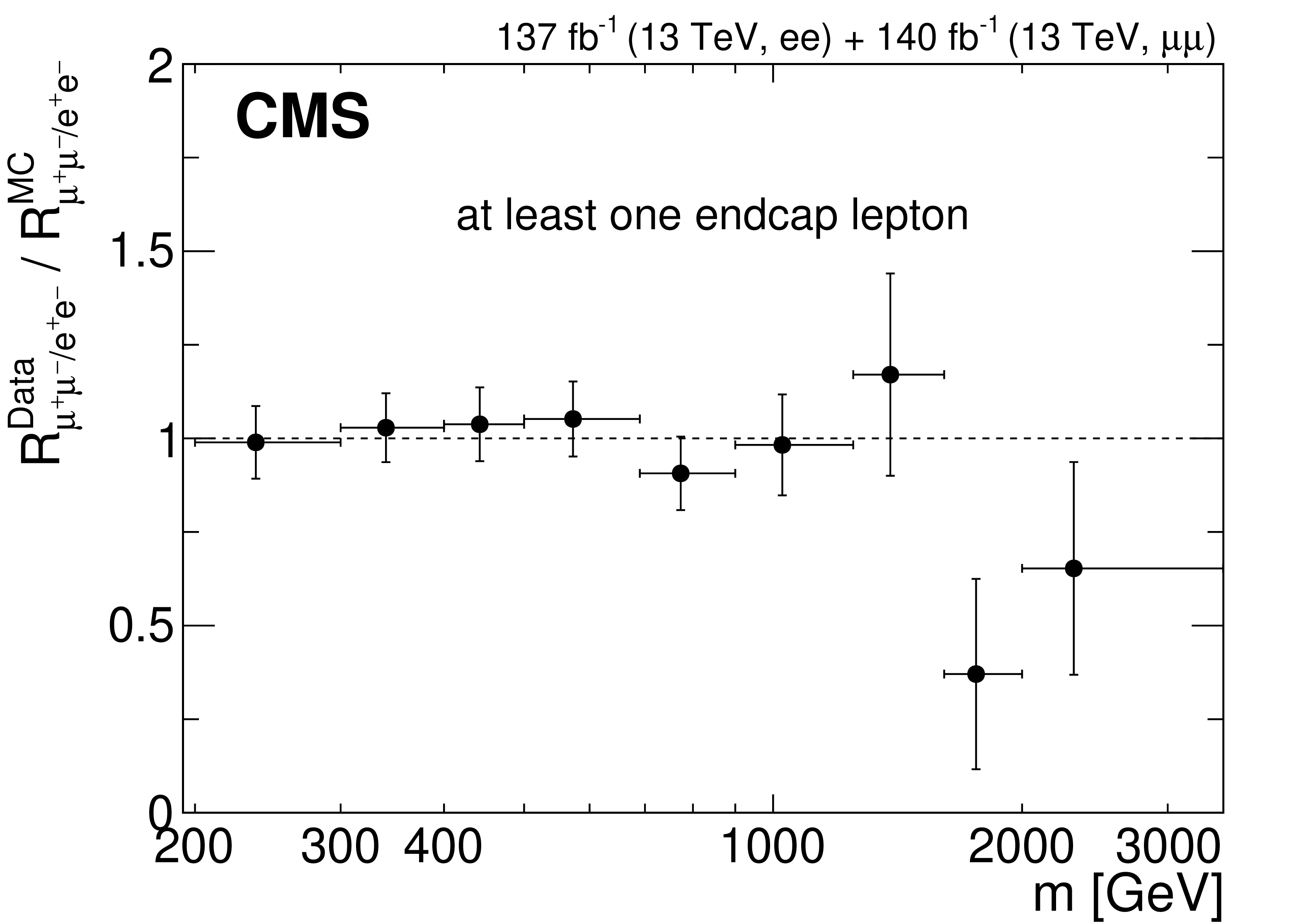 Figure 6: The ratio of decays into muons compared to electrons as observed in data, with respect to that predicted through simulations.

So far, we did not observe any significant signs of new phenomena at high dilepton masses. The absence of a signal nevertheless tells us a lot about potential physics beyond the standard model. With our data, we set the strongest constraints to date on the masses of possible new particles that decay into two leptons from a variety of models. Stringent constraints are also set on the parameters of models that predict nonresonant excesses at high mass, such as models with a new contact interaction between particles or specific models with extra dimensions.

In the upcoming data-taking period of the LHC called Run 3 (2022-2024) and with the upgraded LHC, which provides a much higher luminosity (HL-LHC, 2027+), we will collect much more data than is available now. We will continue to push our search to ever higher dilepton masses. If Nature deals the cards in our favour, we might finally be able to extend the long list of discoveries in the dilepton final state in the future.