Search for New Physics with one charged lepton and missing energy 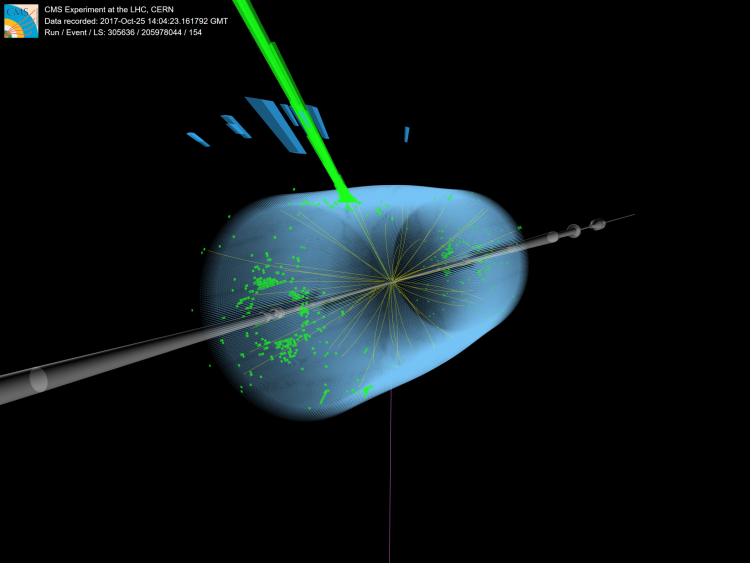 Experimental evidence from the last half-century has established the standard model as a foundational theory of particle physics. Still, it is clear that the standard model is not the final theory. There are many open questions: Is the mass of Higgs natural or fine-tuned? If natural, what new physics (symmetry) governs this? How does gravity play with the other forces? Are there more space dimensions than the familiar three? Do all forces unify at high energy? Many compelling theoretical ideas of new physics beyond the standard model have been proposed to address the open questions. Interestingly, many of these new theories have in common that they introduce new massive particles or differences in the behavior of known particles. If these new phenomena exist in the real world, LHC is best positioned to observe them.

Such new particles could be a new charged W’ boson particle decaying into one charged lepton (electron or muon) and a neutrino in the proton-proton collision events recorded in the CMS detector. The W’ boson is usually predicted as a carbon copy of the W boson in the standard model, but it is very heavy, so it can also decay into the two heaviest quarks. In this analysis, the events where the W’ decays to a lepton and neutrino are taken into account because leptons are extremely clean signatures in the detector and give lower contributions from standard model processes that mimic this signature than the hadronic channels.  The charged leptons can be accurately detected and measured in the CMS detector, whereas neutrinos are weakly interacting particles that will escape the detector without a signal. Nevertheless, their presence can be inferred by momentum conservation in the transverse plane. We sum the transverse momenta of all the detected particles in the event and assign the missing transverse momentum (generally called MET) to the neutrinos.

To separate the W’ signal events from the standard model background events, CMS physicists select events with specific properties: the charged lepton and neutrino must be very energetic, the ratio of their energies has to be almost one, and they have to be back-to-back in the plane perpendicular to the beam axis. The event displays of the observed event for electron and muon channels are shown in Figure 1 and 2. One of the main tasks in this analysis is calibrating, identifying, and correctly measuring the most energetic electrons and muons ever detected in a collider experiment. For the invisible neutrino, as stated above, we can only estimate its transverse component so that the mass of the parent particle can be constrained by the transverse mass (MT). This quantity is a key one in this new physics search that distinguishes the standard model W from the new massive W’ one. Assume W’ exists and promptly decayed into two particles. In that case, the signal will be appearing as a peak (called a resonance) at the very high MT tail region, where background events hardly exist making the resonance relatively easy to spot.

An example of the transverse mass distributions we observed is shown in Figure 3. The experimental data agree well with the standard model expectation, and there is no hint of significant deviation. 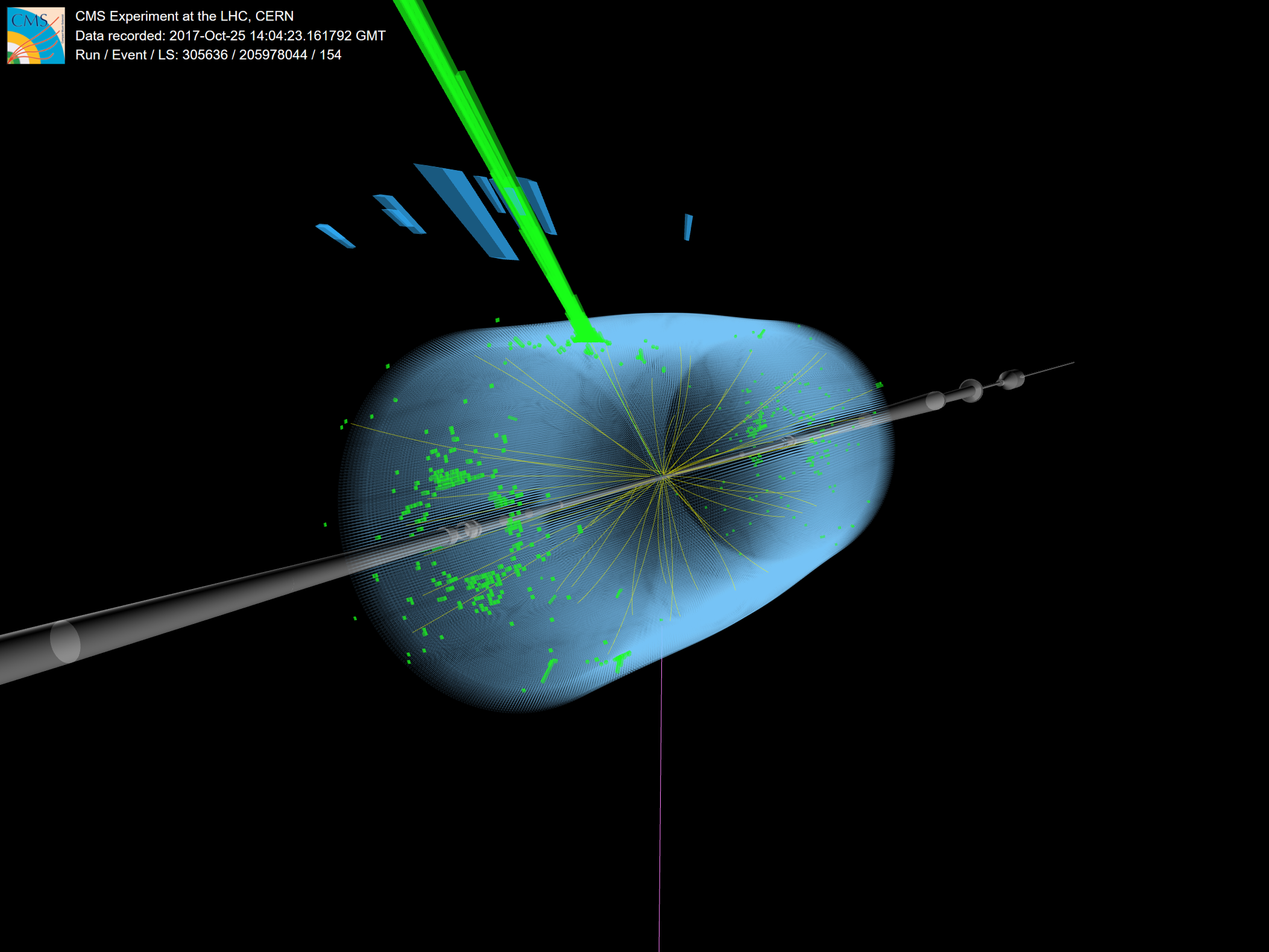 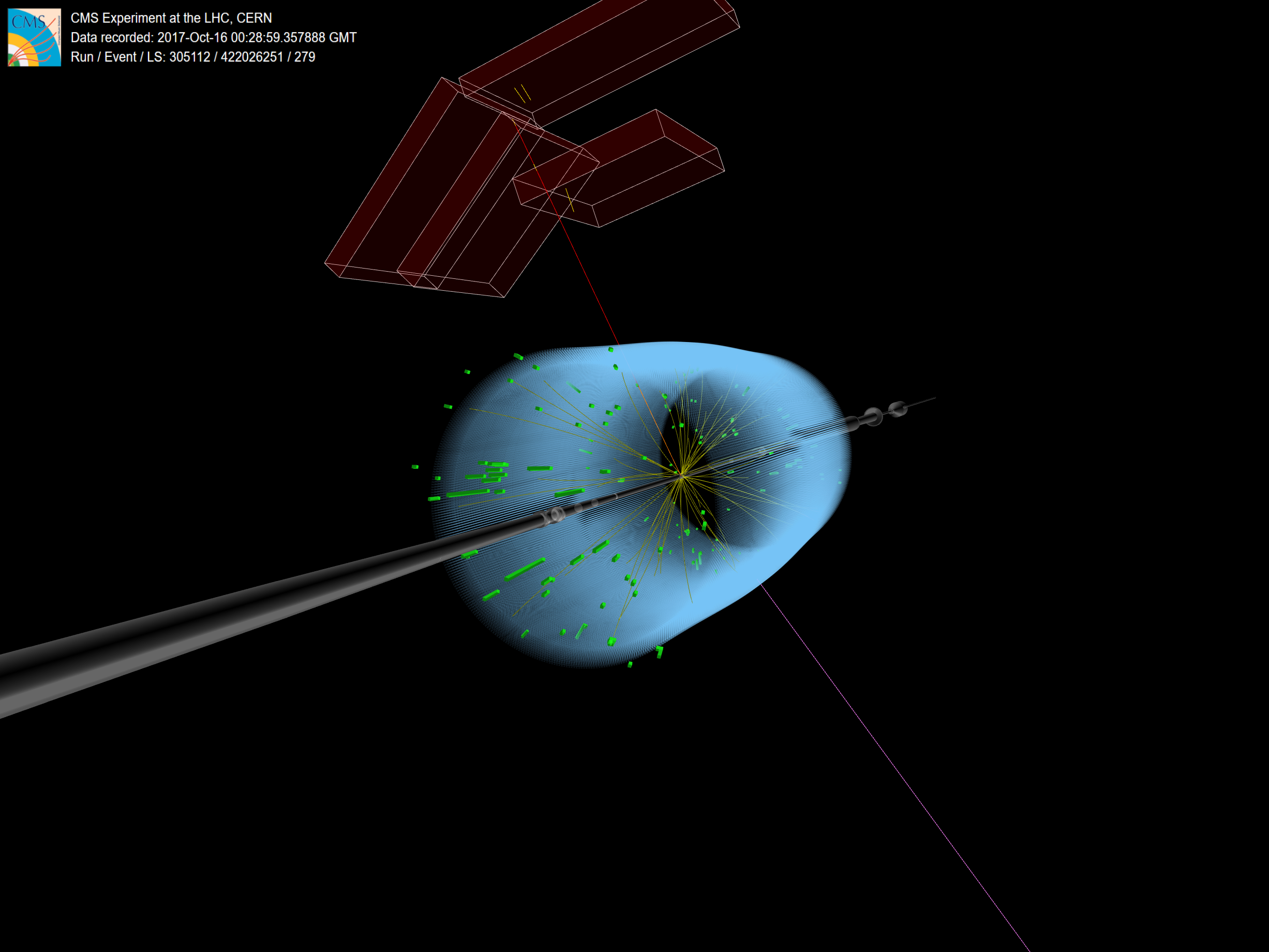 With these data, it is possible to do two different kinds of search. Figure 3 illustrates the two scenarios: on one side, we assume the new hypothetical W' particle can be produced at the LHC, and we look for it in our data. This is called a “direct resonance search”, as the resonance from the particle should be directly visible in the data. But the new particle might be very massive and not directly reachable with the current LHC energy.  In that case, we might be able to see some hints of it, as explained in Figure 4. This is the “indirect search” and it places restrictions on how far this new physics could lie. 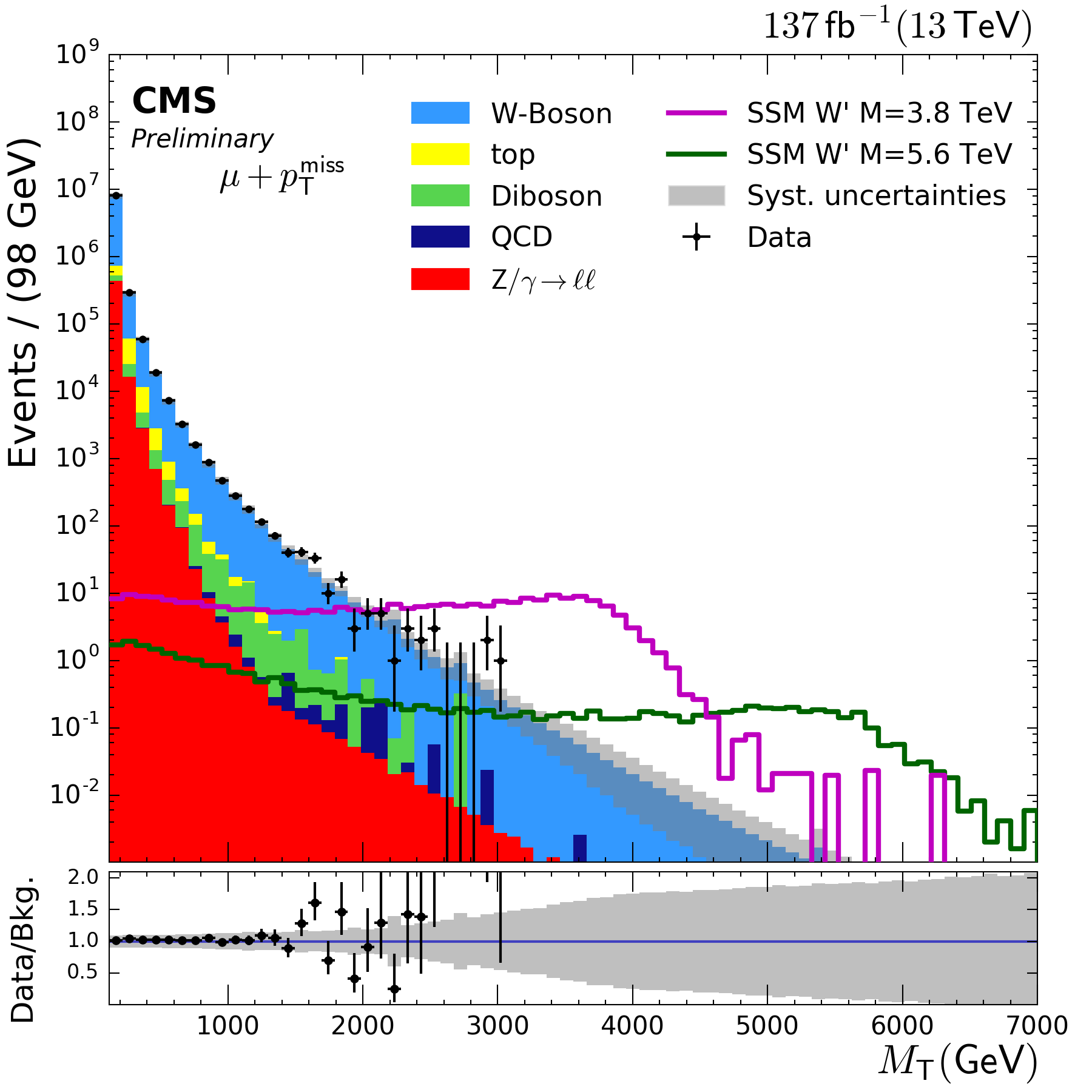 As the data agrees with what we expect, we can set limits on the new particle’s properties. These results can also be used to constrain a variety of other new physics models predicting a lepton and a neutrino in the final state. This approach (called reinterpretation) tests a host of different physics predictions like the existence of new spatial dimensions, new symmetries in nature, and more. We have also combined all of these interpretations of the data to look for a different effect of new physics: the hypothesis that the Higgs boson we discovered is not an elementary particle but is made of other undiscovered particles. This is known as the Composite Higgs scenario. With this analysis, we can explore this model in a complementary approach to looking at Higgs bosons.

Figure 4. Sketch showing two kinds of possibilities studied in this analysis. The new particles are at reach at the LHC (direct search), or they are very massive and beyond LHC energy, but they still change the distributions slightly  (indirect search).

It is fascinating to explore an unprecedented region for new particles. As the center-of-mass energy and the amount of accumulated data increases, more signal-like higher MT events can be observed at LHC. This will improve sensitivity for the discovery of the W’ boson if it is slightly too heavy to be seen up to now.

A new LHC era will soon begin with Run3 (2022-2024) which plans to double the amount of data collected during Run2 (2016-2018). Furthermore, High-Luminosity LHC is scheduled to come into operation at the end of 2027 after upgrading all of the equipment (2025-2027). High-Luminosity LHC will enable us to investigate up to 20 times more data than Run2. With these data, we can test the vast scope of many new theoretical physics models much more effectively. This will lead us towards a deeper understanding of our universe and hopefully unlock many mysteries.