Energy of Electrons and Photons (ECAL) 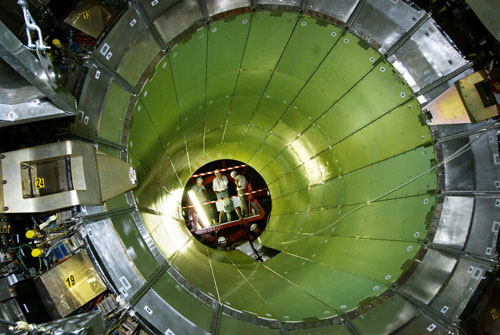 In order to build up a picture of events occurring in the LHC, CMS must measure the energies of emerging particles. Of particular interest are electrons and photons, because of their use in discovering the Higgs boson and other new physics.

The energies of electrons and photons are measured using the CMS electromagnetic calorimeter (ECAL). Measuring their energies with the necessary precision in the very strict conditions of the LHC - a high magnetic field, high levels of radiation, and only 25 nanoseconds between collisions - requires dedicated detector materials.

Lead tungstate crystal is made primarily of metal and is heavier than stainless steel, but with a touch of oxygen in this crystalline form, it is highly transparent and “scintillates” when electrons and photons pass through it. This means it produces light in proportion to the impinging particle’s energy. These high-density crystals produce light in fast, short, well-defined photon bursts that allow for a precise, fast, and fairly compact detector.

Photodetectors, which have been especially designed to work within the high magnetic field, are glued onto the back of each of the crystals to detect the scintillation light and convert it to an electrical signal that is amplified and sent for analysis.

The ECAL, made up of a “barrel” section and two “endcaps”, forms a layer between the tracker and the HCAL. The cylindrical barrel consists of 61,200 crystals formed into 36 “supermodules”, each weighing around three tonnes and containing 1700 crystals. The flat endcaps seal off the barrel at each end and are made up of almost 15,000 more crystals.

For extra spatial precision, the ECAL also contains a preshower detector that sits in front of the endcaps. These allow CMS to distinguish between single high-energy photons (often signs of exciting physics) and the less interesting close pairs of low-energy photons.

A Russian factory in a former military complex took on the job of producing most of the crystals, while the remainder were produced in China. It took about ten years to grow all 78,000 crystals to stringent specifications, taking around two days to grow each one. Inside the detector, the crystals face high radiation, so the lead tungstate material had to be carefully chosen and developed.