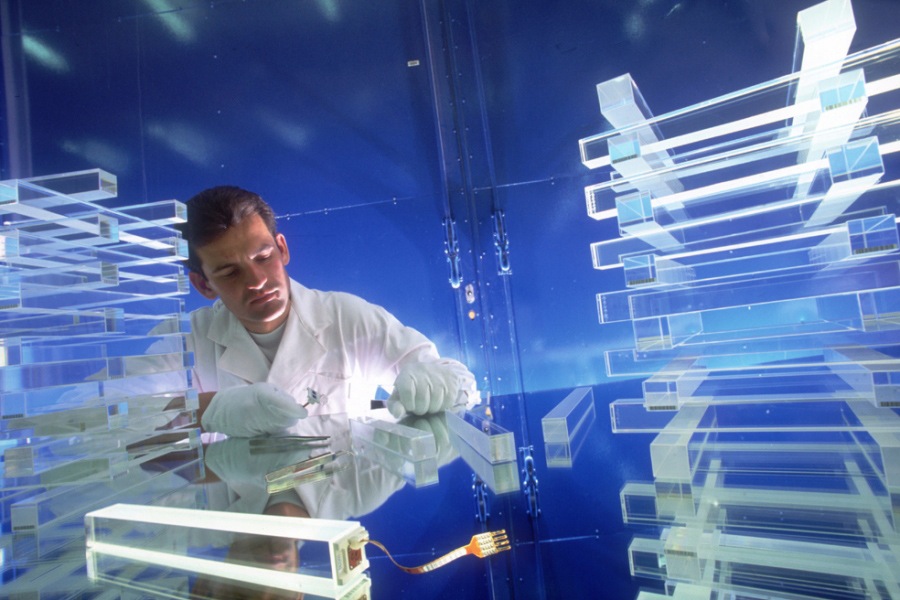 CMS uses lead tungstate (PbWO4) for the almost 80,000 crystals: a material with high density that produces scintillation light in fast, small, well-defined photon showers. This means the calorimeter system can be very precise and very compact, fitting within the CMS superconducting magnet. Lead tungstate is also relatively easy to produce from readily available raw materials, and the experience and capability to manufacture them already existed in China and Russia.

Of course, the material also has drawbacks: firstly that the yield of light depends strongly on temperature, a problem given how much heat is released by the readout electronics. To solve the cooling problem a custom-built system maintains the temperature of the 100 tonnes of crystal to within 0.1oC.

Additionally, because the yield of light output is low,the scintillation light [see explanation below]  must be captured by photodetectors, converted to an electrical signal, and then amplified. The stronger and now digitised electrical signals are then transmitted through optic fibres. Because the photodetectors also need to be radiation hard and operate within a strong magnetic field, avalanche photodiodes or APDs [see explanation below] were selected for the crystal barrel, and vacuum phototriodes (VPTs) for the endcaps.

Finally, though already fairly radiation resistant after intense research to purify the material, researchers found that lead tungstate would still suffer limited radiation damage inside CMS. However the R&D programme led to a much better understanding of how this damage occurs and found that  its main effect is to colour the crystal, affecting how light travels through it.

Knowing this, physicists can ensure that they allow for it in their analysis using a “light monitoring system” during operation that sends pulses of light through each crystal to measure its “optical transmission”. The crystals can reverse radiation damage, or “anneal”, when the accelerator stops (when they are at room temperature) as the warmer temperature naturally shakes atoms back into their ordered structure.

Getting the material right was only one of the challenges for the ECAL team; each crystal had to be cut, machined, polished, tested,and attached to a photodetector. Groups of crystals were then assembled side-by-side in glass-fibre or carbon-fibre “pockets” to form larger structures known as “supercrystals”, “modules”, and “supermodules”.

When an atom is excited, that is, given energy, an electron goes into a higher orbit and then when it falls back, it releases this energy as a photon. In CMS, when a high-energy electron or photon collides with the heavy nuclei of the ECAL crystals, it generates a shower of electrons, positrons, and photons, and atoms in the material take energy from the passing particles to excite their electrons. The atoms quickly ‘relax’ and the electrons each emit the extra energy as a photon of blue light. A photo device [see below] then picks up these ‘scintillation’ photons and the amount of light generated is proportional to the energy that was deposited in this crystal. This tells us the energy of the incoming electron or photon.

Avalanche photodiodes (APDs) are photodetectors made of semiconducting silicon with a strong electric field applied to them. When a scintillation photon strikes the silicon and knocks an electron out of an atom, the electron is accelerated in the electric field, quickly striking other atoms and knocking electrons off those too. As these are also accelerated, this method will produce an avalanche of electrons with their numbers increasing exponentially. Through this method, APDs are able to produce a very high current in a short time, which is necessary as the lead tungstate crystals give a relatively low light yield for each incident particle. The signal is then amplified, digitised and immediately transported away by fibre optic cables, so that the analysis can be done away from the radiation area.

Crystals in the endcaps use vacuum phototriodes (VPTs) because here the radiation is too high to use silicon photodiodes. As opposed to an APD, a VPT contains three electrodes within a vacuum. Initially, electrons are released when the light strikes atoms in the first electrode in the normal way. Then the voltage difference between electrodes accelerates the electrons into the second electrode (the anode), producing several more electrons, that are all then accelerated to the third (the dynode), releasing a second batch of electrons. Thus this also creates a large current from the initial tiny amount of scintillation light, which is turned into a digital signal and sent along the optic fibres to the upper level readout.

All the photodetectors were glued to the crystals here at CERN, but the finished products are the sum of contributions made by several hundred people and many institutes.