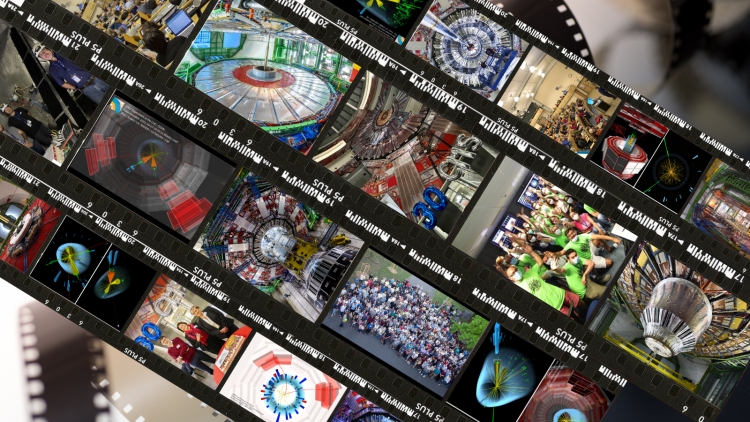 If we consider 2022 as a season of the worldwide TV series called "The CMS Experiment at CERN", we would definitely say this has been highly rated and we can’t just wait for the next season to start.

As at every end of season, we have prepared for you the perfect summary to refresh your memory. So, take a seat and enjoy the Season ‘22 recap!

If we had to give a title to this year it would be: “Run 3 has started”! Indeed, after 3 years of major upgrades and maintenance, the LHC Long Shutdown 2 came to an end. The first part of the season focused on completing the operations to make the CMS detector compact again, with all its sub-detectors back in place and all the slices put together.

Then, on the 4th of March, the solenoid magnet was powered on and successfully reached its climax, the nominal magnetic field of 3.8 teslas. For the following four months, an incredible number of tests, alignments, and calibrations have been performed, foreshadowing the following scenes. Finally, the long-awaited moment came: July 5th and the start of the LHC Run 3 program. The event was actually broadcast on different media channels with a big Live event at CERN. On the very same day, the CMS detector took its first amazing “photos” of protons colliding at the energy of 13.6 trillion electron volts (TeV). A new world record and a great start to the next four seasons! Even more exciting than the increase in energy is that in Run 3 we are expecting more collisions than the previous two runs combined, which by extension means more data to study than ever!

Preparing for the start of LHC Run 3 was demanding but turned out to be very rewarding and gave all fans a big surprise! Only a few weeks later, CMS presented a measurement of the top-quark pair production cross-section using the newly-collected data, which led to the first publication using the Run 3 data at the LHC. “This incredible result underlines that CMS has been recording high-quality data from day 1, and we are excited to work towards uncovering all the new and improved results that the Run 3 data taking has in store for us”, said Patricia Mc Bride, the CMS experiment Spokesperson.

The first Run 3 result at the LHC was not the only highlight of the season. This year the Collaboration presented the most accurate measurement of the top-quark mass and the world's most accurate measurement of the decay of the B_s-meson into a dimuon pair, an important piece of information to increase our understanding of flavour anomalies observed by other experiments. Equally interesting, CMS claimed the first-ever observation of W+W- boson pair production in vector-boson scattering, a key result in the study of the Standard Model. We are well aware that these few examples don't give a complete overview of the diversity and impact of the full set of CMS publications, and we invite you to explore the list of our physics briefings.

2022 was also the year of noteworthy anniversaries, often increasing the sense of community among the series enthusiasts. That was the case for the 10 years of Higgs physics, since the discovery of the Higgs boson was announced on 4th July 2012. That day, the Collaboration shared a complete portrait of the Higgs particle based on CMS results at the “Higgs@10 Symposium” at CERN and in a specially commissioned article in the journal Nature; see here the related physics briefing.

Moreover, on the 1st of October, the CMS Experiment marked 30 years from the submission of the Letter of Intent. For the youngest members of the Collaboration, the year ‘92 seems like a long time ago (indeed some of them were not even born then!), but some others were already protagonists in the pilot episode and they still remember it as if it was yesterday. You can listen to some of them recalling stories from the beginning of CMS in this video. The celebrations of the 30 years of CMS reached triumph during the CMS Symposium and the following social event, when the Collaboration was invited by the new spokesperson team (Patricia McBride, Wolfgang Adam, and Lucia Silvestris) to take a trip down memory lane and discuss future inspiring plans.

As happens in a big film or series production, our Experiment also needs a big crew of the best experts for each task. The Collaboration so far counts 248 institutes from more than 50 countries and keeps searching for the brightest minds, like those awarded this year with the CMS Ph.D. Thesis Award, the CMS Young Researchers Prize and the CMS Award. We also revived the CMS Industry Award, given to collaborating companies that help us achieve our technical goals, especially for the ongoing Phase-II upgrades.

CMS officially welcomed a new sub-detector in the family, as well. The milliQan detector is being installed above the experimental cavern, 33 metres away from the CMS interaction point. Its purpose is to look for so-called milli-charged particles, theoretical subatomic particles that are not part of the Standard Model, which could possibly provide information about Dark Matter!

This year also marked the beginning of a "phase change" for the CMS upgrade program for High-Luminosity LHC, with most projects finalising the prototyping and moving to preparations for mass production. This is like a big plot twist that is coming in the seasons ahead! The scale and complexity of the detector upgrades are mostly comparable to the original detector, with some parts being significantly more challenging. For example, one of the 47 layers of the High-Granularity Calorimeter has more channels than the entire existing endcap ECAL+HCAL system (not including the Preshower!). Labs around the world are preparing for mass production to perform quality control on components, to assemble modules, and construct large parts of detectors, as well as training people. Indeed, this will provide excellent opportunities, particularly for the younger collaborators, to get first-hand experience in building and testing particle detectors, in parallel to operating CMS and analysing the data from Run 3 - a perfect trinity of activities for all physicists!

As a gift to the world for the end of the ‘22 season, the CMS Collaboration released an additional 491TB of collision data collected during 2012. This means that all proton-proton data collected by the CMS experiment during LHC Run 1 (2010-2012) are now available through the CERN Open Data Portal. Completing the delivery of Run 1 data to the public domain within 10 years after data taking reaffirms the CMS collaboration’s commitment to its open-data policy.

This year was full of suspense (we waited eagerly for Run 3 to start!) and exciting plot twists (who could imagine that we would have so quickly our first physics result?); the best script for a good TV series! So, Season ‘22 of the CMS Experiment is now over, but in just a few days the new episodes will be out… and we are positive that they will be equally binge-worthy!