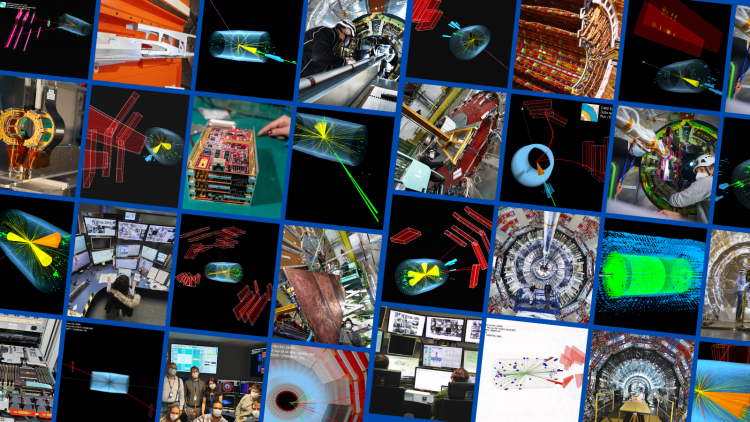 Before saying goodbye to 2021, we’re proud to look back at major milestones reached by CMS collaboration both on physics results and detector upgrades along the year. It is impossible to mention all the achievements on various fronts; what we present here are highlights of some of the most notable ones.

With 74 papers based on collision data published this year, the enthusiasm of the CMS collaboration continues to extract fascinating and new results from the CMS Run 2 data. This is of course largely attributed to the ever-increasing knowledge of the Run 2 dataset (link) and the record-breaking precision of the integrated luminosity of 1.2%. Considerable efforts have gone into making the unabated hunt for physics beyond the standard model more sensitive to unexplored or difficult scenarios, such as dark matter, long-lived particles (link, link), innovation towards extreme transverse momentum leptons(link, link) or multiple heavy objects decaying hadronically.

The study of Quantum Chromodynamics (QCD) in its most extreme phase space, just like standard model measurements, deserved a lot of attention in 2021. For the first time at a hadron collider the decay width of the Z boson was measured with unrivalled precision. Top quark physics continues to be a fertile breeding ground for analysis innovation such as machine learning and effective field theory while also providing a useful tool to understand the standard model and other quarks. New particles such as an excited beautiful and strange baryon, and new very rare combinations of particles such as three J/psi particles provide further knowledge of hadrons. Extremely competitive limits on di-Higgs production complement the ever increasing knowledge of the standard model scalar sector (other link), with the year ending with CMS’ impressive evidence of off-shell Higgs boson production and a measurement of the Higgs boson lifetime.

Honouring the commitment, the CMS collaboration has also released this December a complete new batch of research-quality open data recorded by the CMS detector in 2015, the first year of Run 2. This marks the seventh release of CMS open data since 2014.

Every passing day of 2021 was also bringing us more and more close to the end of the Long Shutdown 2 (LS2), the period of time at CERN dedicated to maintenance, upgrades and tests in preparation for Run3 starting next year, when stable beams will be circulating again inside the Large Hadron Collider (LHC). During this year, CMS completed all planned milestones for LS2 despite the big challenges imposed by the global pandemic.

The year started greatly with the installation of the new support of the beam-pipe and its surrounding Forward Shielding’s innermost  elements aimed to significantly reduce the background noise of the detector. These upgrades made the Forward Shielding compliant with the design of the new beam pipe. Installed in last April, the new beam-pipe is now conformed to numerous demands of physics, vacuum, and integration requirements making this the biggest upgrade of the experimental beam vacuum system since the first operation of CMS in 2008.

This upgrade was followed by the re-installation of the closest neighbour of the beam pipe and actual heart of the CMS detector: the Pixel Tracker. After more than two years of work resulting in improvement of the pixel tracker current designs and a completely new innermost layer, the installation was successfully completed in June and celebrated during a CERN live event on different social media platforms.

In the nearby region, remaining very close to the beam pipe, the BRIL detector carries out one of its important tasks of measuring luminosity, the parameter that describes how often collisions occur at the centre of the CMS detector and beam conditions. The Beam Radiation, Instrumentation, and Luminosity (BRIL) group completed the installation of three instruments which will serve the function of  giving spectacular precision in the counting of collisions in each passing group of 100 billion protons (see also cern.courier). 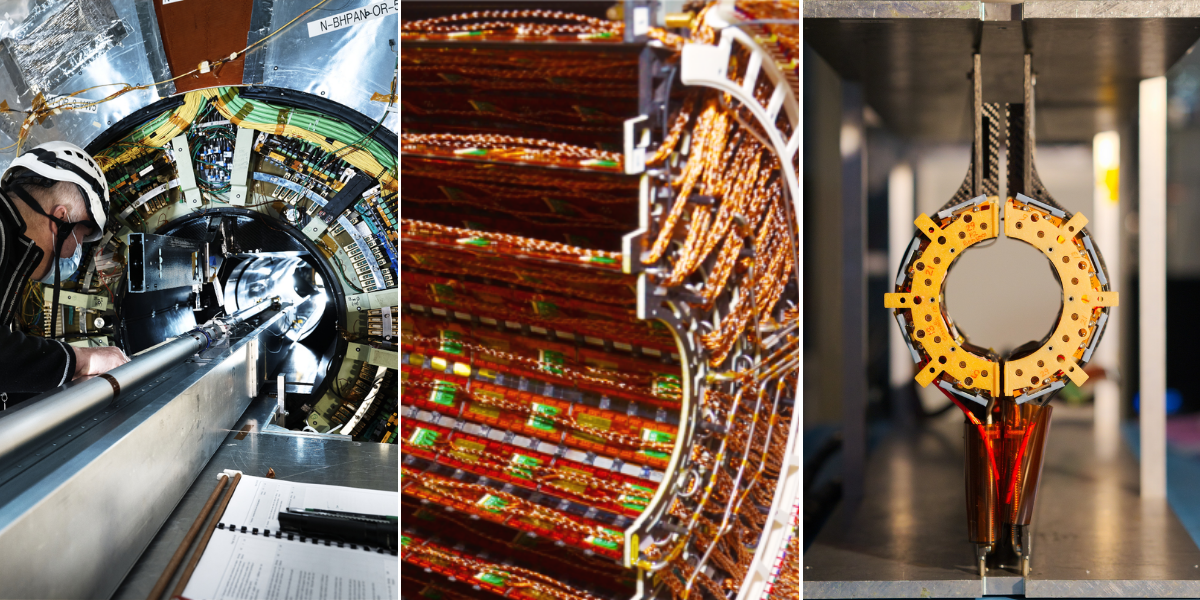 Left: Insertion of the central vacuum chamber across the CMS Tracker

With all the CMS sub-detectors in place, including the Cathode Strip Chamber (CSC) and their upgraded electronics, five weeks of cosmic ray data-taking campaigns were organised during the sunny summer to validate and verify the correct functioning.

At the end of the campaigns and timely completion of planned major upgrades, CMS detector was set in closed configuration and its big solenoid magnet re-commissioned together with its newly refurbished insulation vacuum system and the brand new Freewheel Thyristor. Once the commissioning was completed, the magnet was stably ramped to 3.8 Tesla for the CERN pilot beams scheduled for the last two weeks of October.

The first pilot beam circulated on 19th October 2021 and the very same day the CMS detector recorded splash events. The data recorded allowed physicists to check the functionality and synchronisation of the electronic channels of both CMS calorimeters, Electromagnetic Calorimeter (ECAL) and Hadron Calorimeter (HCAL), confirming their excellent status after 3 years of LS2.

Following the first week, LHC moved to the second and last week of tests aiming for test beam collisions. The CMS detector recorded test collision data useful for the  commissioning of all sub-detectors, including the completely new GE1/1 station installed during the LS2, the GEM muon chambers. 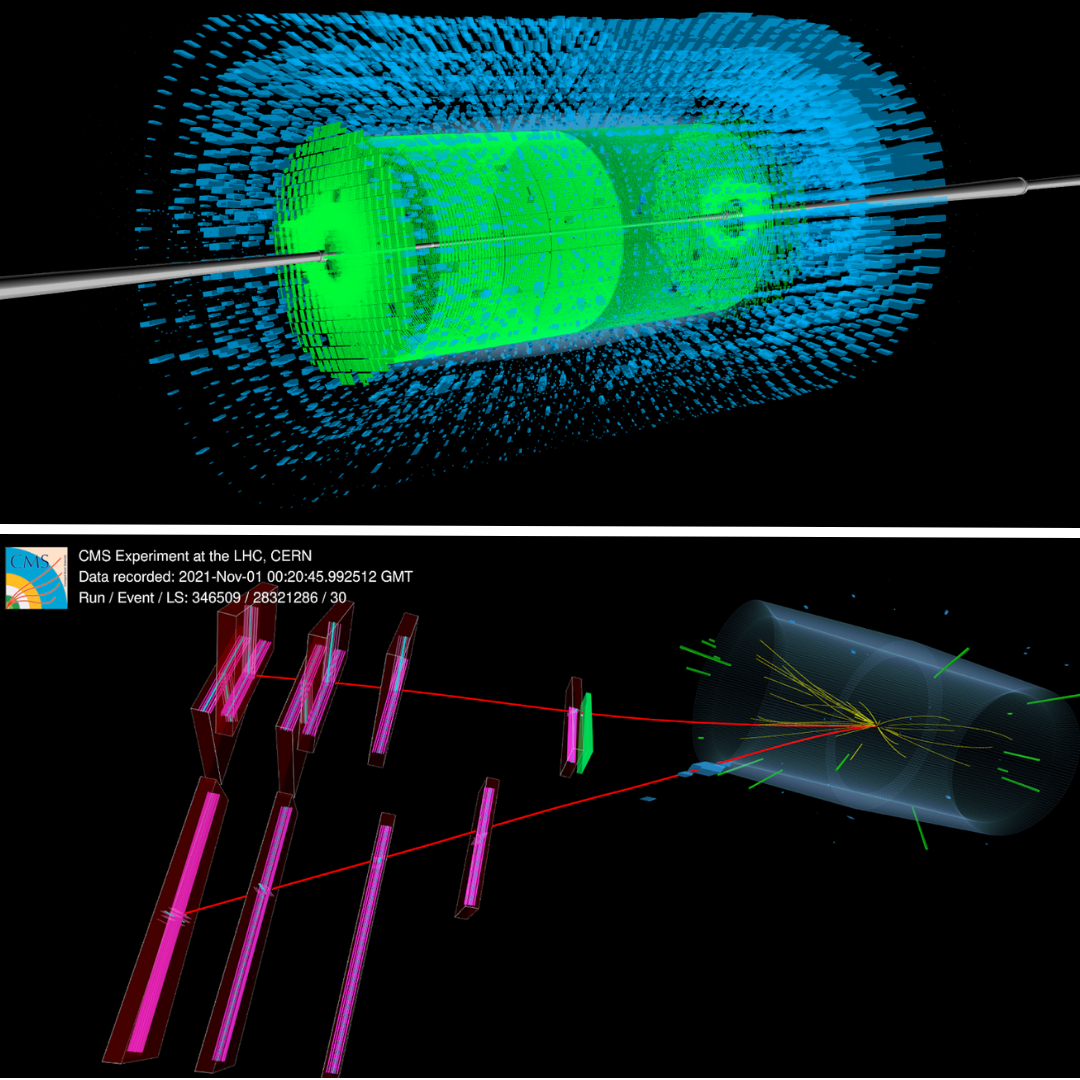 Bottom: Test beam collision events seen recorded by the CMS detector. Red lines are tracks of muons. It is interesting to note a signal in the new GE1/1 is seen (in green, just next to the first signal in the CSCs, in red).

Furthermore, when the beams were not circulating in the LHC, CMS kept all its components turned on to detect cosmic muons - Cosmic Rays At almost Four Tesla (CRAFT). Overall, the data collected from the cosmic rays campaigns is the key ingredient to align the tracking system with the needed precision for Run3.

During the CERN pilot beams, for the first time CMS High Level Trigger (HLT) has reconstructed online the LHC collision data with newly introduced Graphic Processing Units (GPUs). HLT is responsible for analysing in real time up to 100’000 collision events per second, and selecting the most highly energetic, rare or otherwise interesting ones for permanent storage and offline analysis. The additional computing power provided by these GPUs will not only allow CMS to improve the quality of the online reconstruction but also to extend its physics programme, running the online data scouting analysis at a much higher rate than before.

Recently,  CMS was again set in open configuration for the installation of muon chambers demonstrators: the improved Resistive Plate Chambers (iRPC), and Gas Electron Multiplier (GEM) of the second station. The installation of these prototype chambers, including the Drift Tube demonstrator installed in 2019, marked an essential step towards completing the CMS muon upgrades for High Lumi LHC and it’ll help to identify any possible issue before installing the full station of the systems.

Big conquests are the result of hard work, dedication and creativity of the many CMS members who daily contribute to make CMS one of the biggest collaborations in the world. For this reason, as every year CMS collaboration recognized accomplishments and excellent contributions of many of its members giving different awards such as CMS Thesis Award, CMS Young Researchers Prize and CMS Awards.

Although this year was challenging, CMS was able to achieve its upgrade goals and to release important physics results also presented at many International conferences. CMS collaboration is looking forward to starting the new chapter at the start of Run3 in 2022.